Economy in ‘wait and see’ mode

Good news on the economy last week as the ONS upped its estimate of annual GDP growth slightly, by 0.1 percent.

The employment figures, also released last week, showed an improvement on the previous quarter but a slight fall from the previous month.

As ever, the Resolution Foundation was quick off the mark its charts.

The number of full-time jobs dipped back below its pre-recession peak too and there was a slight increase in unemployment on the previous month.

Via Michael O’Conner, also one of the most reliable rapid chart makers.

There was also a slight uptick in economic inactivity. 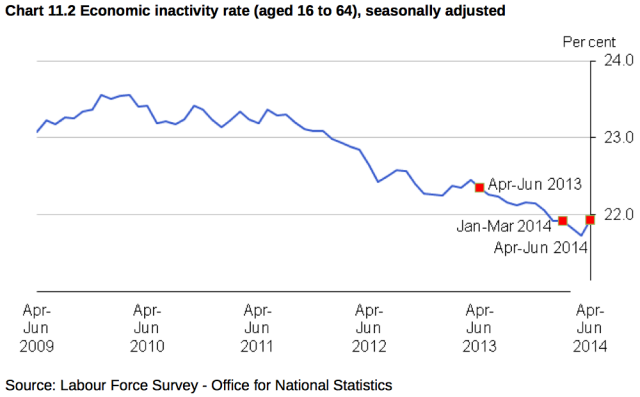 More widely reported was the drop in pay, the first since 2009, with wage growth still well below inflation. 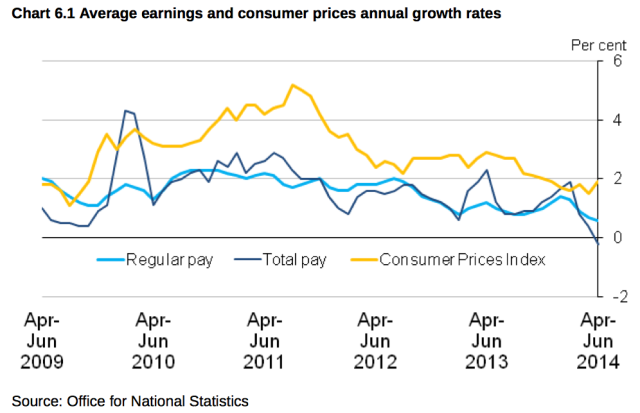 The CIPD’s Labour Market Outlook found that the median pay increase was down on last year; 2 percent, compared to 2.5 percent in 2013. The proportion of employers expecting to give a pay increase over the next year fell slightly from 48 percent to 42 percent. The Bank of England has halved its wage growth forecast for this year.

The CIPD also noticed a “modest fall in employment intentions” since the last quarter.

It would be unwise to attach too much significance to small setbacks. These figures could all just be a statistical blips. As graduates and school levers are taken on by firms this summer, the employment figures should rise again. It is likely that the underlying trends from the previous year are set to continue. The Wall Street Journal thinks so, predicting a wage take-off in the UK over the next year, as falling unemployment gives workers more leverage. Ben Chu, while fairly downbeat about the short-term, is keeping the faith in a productivity increase and, with it, the recovery of at least some of the economy’s lost ground.

All the same, in a strong recovery you wouldn’t expect to see blips, not even small ones. The CIPD survey showed that a number of employers are in ‘wait and see’ mode, especially when it comes to pay and that this uncertainty has increased recently.

Anecdotally, this slightly downbeat feeling is consistent with what I hear from talking to people both in public and private sector organisations. Small cautious steps seem to be the order of the day. The recovery may be strong, as some commentators keep telling us, but it’s clear that not everyone is sure enough to commit to pay rises or more recruitment. I hear things like, “I reckon things are improving but….” and the further away from London people are, the more likely they are to finish off with “….we haven’t seen much of it round here.”

OK, these are I Met A Man stories but recent data on consumer confidence suggests the feeling may be more widespread. The percentage of people expecting the economy to improve continues to rise but the percentage expecting their own circumstances to improve has started to fall. Again, only slightly.

People have heard the economic growth stories in the news but many are not quite feeling it yet.

These may be small splutters before the great economic engine starts running at full speed again. But, even when they are chugging along steadily, the strongest engines can stall. As I said last month, we are still a long way from a normal recovery. For now, the bubbly is staying in the fridge, while we wait to see what happens.

2 Responses to Economy in ‘wait and see’ mode