The prohibition of alcohol in the USA was one of those occasions when a nation seemed, to the rest of the world, to have taken leave of its senses. It is one of the most draconian and long-lasting restrictions on personal liberty imposed by a major democracy in peacetime. And it was enacted in a country which has liberty and the pursuit of happiness among its founding principles.

Essentially, prohibition happened because a series of political and social factors lined up at the right time. Campaigners had been trying to get alcohol banned for years without much success. But in the early 20th century United States there were a lot of worried people. Many in rural and small town America felt uneasy about rapid industrialisation and urbanisation. The immigrants arriving to work in the new industries were seen as a threat to the American way of life. The success of campaigning organisations like the Anti-Saloon League was largely due to their ability to link their anti-alcohol aims to these wider fears about immigration and social change.

In this narrative, the cities, with their crime, low morals, drunkenness and immigrant populations contrasted sharply with the small towns with their social order, morality, temperance and Anglo-Saxon protestant populations. Drink and drunkenness were urban and foreign. It was a powerful story. The alliance between the Anti-Saloon League and the Ku Klux Klan, a far more powerful organisation in the 1920s than it is now, linked the causes of nativism and prohibition.

There were well-meaning liberals involved in the campaign against alcohol and suffragists, who thought that sobriety would stop husbands beating their wives. There were even some socialists who believed that, once the workers had sobered up, they would realise the extent of their oppression and rise up to overthrew capitalism. For the most part, though, it was a campaign led by conservatives.

The final piece to fall into place was the brewing companies’ loss of political influence during the First World War. Most of the brewers were of German descent. Anti-alcohol campaigners portrayed drinking as unpatriotic. Any counter arguments the brewers made  were drowned out by anti-German hysteria. 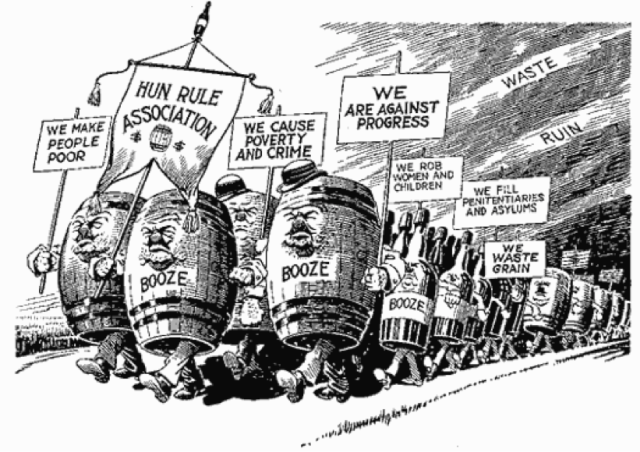 Opinion polling was in its infancy in 1920 so we can’t be sure how far the American public supported the ban on alcohol. The reaction when it was enacted suggests that many did not like it at all as they started trying to get around the law right from the start. Nevertheless, the noisy and hysterical campaign for prohibition convinced many in Congress that they would be unwise to oppose it. President Woodrow Wilson, who tried to veto prohibition, was scathing about the supine legislators:

These miserable hypocrites in the House and Senate . . . many with their cellars stocked with liquors and not believing in prohibition at all— jumping at the whip of the lobbyists.

Prohibition was described as a ‘noble experiment‘ but it was, by and large, a disaster for America. Not only did it enable the rise of powerful crime syndicates, it also had many unintended economic consequences. As expected, breweries closed but so did restaurants, theatres and haulage firms. Many states were heavily dependent on liquor taxes. Around 75 percent of New York’s revenue came from taxes on alcohol. According to some estimates, prohibition cost the federal government a total of $11 billion in lost tax revenue while costing over $300 million to enforce. One of the reasons for the change of heart in government was the plummeting tax revenues during the depression. In the end, Congress wanted tax revenue more than it wanted people to stop drinking. The journalist H.L. Mencken remarked that the one good outcome from prohibition was that it had completely refuted all the arguments of the prohibitionists. After 14 years, America finally gave up on one of its worst ideas and prohibition was repealed.

The parallels with Brexit are striking. As with prohibition’s advocates, the success of the Leave campaign was in linking something people didn’t much care about to something that concerned them a lot. As the Economist noted last week, before the referendum, the UK’s membership of the EU was a non-issue for most people. Immigration, though, was something a lot of people had been concerned about for a long time. The two issues became conflated during the referendum campaign and, as this chart from Migration Observatory shows, the EU shot up in importance as the campaign progressed. 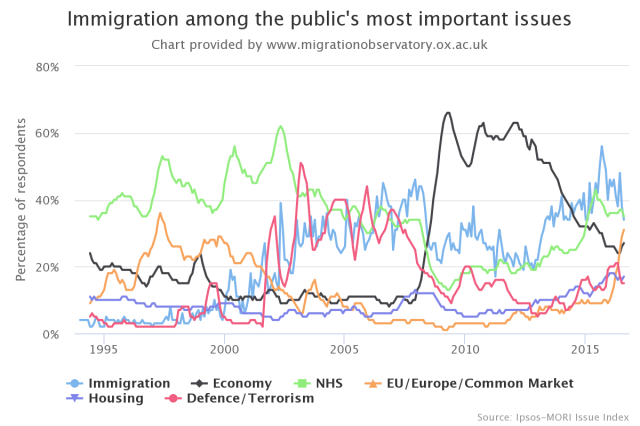 As with prohibition, support for Brexit was driven, at least in part, by a reaction against a changing world and a sense of being out of step both culturally and economically with the prevailing political climate. In England and Wales, rural areas and small towns tended to vote Leave while larger cities voted Remain. Like prohibition in the 1920s, Brexit became a lightening rod for various forms of discontent. The resentment crystallised around a single issue.

And once again, legislators were bamboozled into submission by the noise. Most MPs supported Remain yet placidly voted to leave the EU without asking many questions. Labour MPs allowed themselves to be convinced, on questionable evidence, that there was a mob of angry white working class voters ready to turf them out of their seats if they opposed the triggering of Article 50 in any way. Sure, there is a noisy sub-group of Brexit voters who call for the hardest Brexit and scream about betrayal at every opportunity but they are not representative of most Leave voters.

As the negotiations drag on, the economy starts to slow down and the drain on government resources prevents it taking much action on anything else, the enthusiasm for Brexit is likely to diminish. The FT’s Janan Ganesh perhaps echoed H.L. Mencken when he said, “Brexit is an idea whose only effective rebuttal is its own implementation.” As with America and prohibition, we will have to try it before we realise just how bad an idea it is.

Prohibition didn’t alleviate any of the grievances which led to its implementation and neither will Brexit. Already, the leading Brexiters in government are backtracking on immigration. It is likely that the Leave voting areas will be hit hardest by the economic disruption that follows Britain’s withdrawal from the EU. A few opportunistic carpetbaggers might get rich but the majority of us will be worse off.

Historians will study Brexit as they study prohibition, with bemusement that a nation can do something so massively disruptive but with so few benefits. What, they will wonder, made the British do something so pointless? Like prohibition, Brexit is another ‘noble experiment’ which will one day be judged as a spectacular mistake. The Americans, though, were able to reverse their reckless decision. We will not be so fortunate.