This was a watershed month for the UK’s slow recovery, with a number of things finally getting back to where they were before the recession. In July, GDP, the employment rate and the number of full-time jobs edged above 2008 levels. The FT did a celebratory piece this weekend with some great charts from Chris Giles.

When you look at the per capita figures, though, things don’t look quite so good. The population has risen since 2008, so, once you divide it up, 2008’s GDP doesn’t go as far.

The employment figures tall a similar story. The rate might be back where it was before the recession but the net increase in jobs has been almost entirely due to part-time and self employment.

Put plainly, what it shows is that the recovery of the employment rate to previous levels has been driven entirely by growth in numbers of people who aren’t full-time employees. That doesn’t mean there haven’t been any new full-time employee jobs created, but it does mean that no more have been created than have been lost. The population has grown considerably since 2008, yet the economy has been able to provide additional employment only in the form of part-time employment or self-employment.

Much of this additional employment doesn’t pay very well. Real average earnings are still 10 percent lower than before the recession or, when you include all those self-employed people, probably more than 12 percent lower. 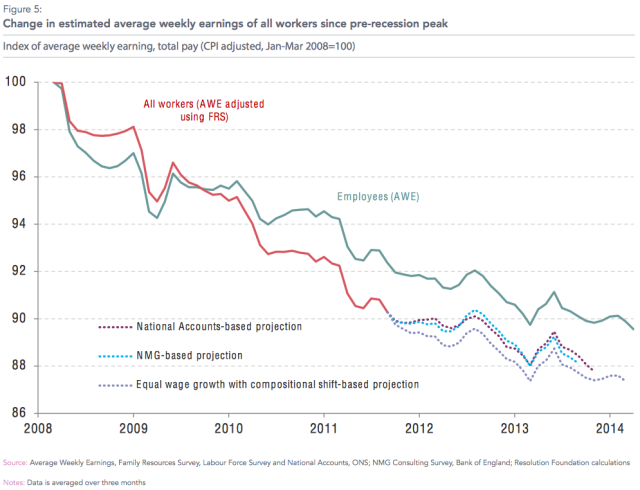 Apparently, George Osborne thinks he is going to get a big tax boost in January when the self-employed pay their contributions. Given what has happened to self-employment earnings in recent years, though, such a recovery would have to be miraculous. As Philip Inman says:

[A] bigger rise from self-assessment receipts in January 2015 is far from certain. Wages remain depressed and it is not clear how many skilled, well-paid jobs have been created. More importantly, the biggest boost to employment comes from the 700,000 self-employed people who have pushed employment totals to new highs. The Treasury can only guess at their impact. It doesn’t know how many are in low-paid, part-time work. It doesn’t know if they will earn enough to pay tax at all.

The Resolution Foundation’s report last week showed that, seven years after the banking crash, many people are still in considerable financial distress.

It warned that a rise in interest rates to 3 percent could double the number of households facing difficulty paying off their mortgages. We can’t really talk about a strong economy if a rise to what we used to think of as a low-ish base rate is all it takes to tip a couple of million people over the edge.

What the country needs now is an increase in secure, dependable, basic rate tax-paying full-time employment, of the sort that enables people to provide for their families without the need for in-work benefits. But, as the Migration Advisory Committee noted earlier this month, this is just the sort of employment that has been in decline in recent years. 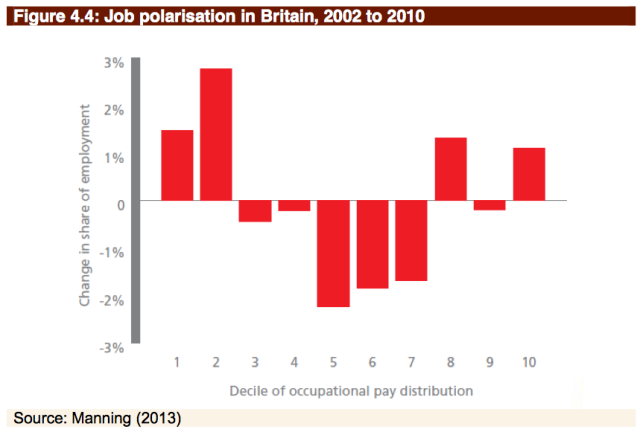 Recovery there may be, then, but this is still a country of stagnating wages, high debt and a lot of precarious employment. That isn’t something that is going to be fixed quickly.

Where we go from here is anybody’s guess. Even the people who are paid to understand all this stuff have no idea. Full-time employment seems to be increasing and, if this were a normal recovery, we would expect pay to start rising soon. If the optimists are right and the economy continues to grow at 3 percent per year, things will start to look a lot better. Even the 2015 Dilemma won’t be quite as bad.

So far, though, this has not been a normal recovery so predicting that it will turn into one would be a bit rash. Just because some things have got back to their pre-recession levels, it doesn’t mean we are back to normal. As Frances says, it’s still a bit early to break out the bubbly.

Back in 2009, WPP boss Martin Sorrell predicted a bath-shaped recession; a sharp fall, a bump along the bottom, then a slow rise. If you look at the per capita GDP graph, he was spot on. What he probably didn’t realise at the time, though, was just how long a bath it would be.