Credit ratings agency Moody’s published a report on ageing last week. Using the recently updated UN population projections, it mapped the population change in each country. It concluded that the unprecedented pace of ageing will slow down economic growth over the next two decades.

And it’s not just a problem for the rich West:

Aging is not just a developed-world problem as it is generally believed. Many emerging markets are already classified as aging. Countries like Russia, Thailand, Chile and China have rapidly deteriorating demographics. Even relatively young countries such as Brazil and Turkey are aging. Moreover, the pace of aging in some of these countries is more rapid than in developed economies.

The full report is behind a paywall but a couple of the newspapers ripped some charts from it.

These from the Daily Mail:

City AM has some interactive maps based on the same data.

The projections to 2030 don’t really give the full story though because it’s what the UN thinks will happen in the following 2 decades that’s really interesting. Some of the countries classed as “Not aging” on these charts will age rapidly between 2030 and 2050.

Just as countries have industrialised and developed faster than the West did, their populations will age more quickly too. As a UN report explained (my emphasis):

This is particularly true for the richer emerging economies, those the World Bank classes as upper-middle-income countries. The ratio of the population over 65 to the working age (15-64) population rises more rapidly for these countries than it does for the rich economies.

As these countries become more affluent, their people become more educated and healthier, their birth rates fall and, crucially, their life expectancy rises. Their populations age for the same reasons as they did in the west but it happens over a much shorter time.

The populations in the rich nations will age over the next 35 years, though Japan already seems to be in a league of its own.

Now look at the projections for the BRICS.

The speed at which the populations of China and Brazil age is mind-boggling. They go from African and Asian dependency ratios to European ones in the space of 40 years.

The projections for South-East Asia are just as dramatic.

Brunei, Singapore, Thailand and Vietnam age at a remarkable pace.

It’s a similar story in the Middle-East.

By 2050, Turkey, Iran and Lebanon have almost caught up with Europe.

And for North Africa. 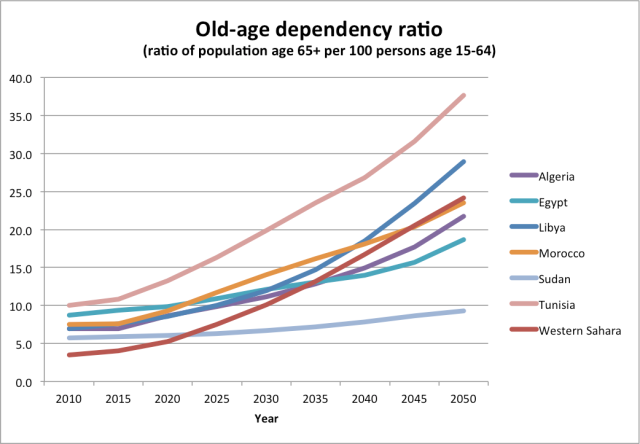 Tunisia and Libya leading the way.

And for the Arabian Peninsula.

This is where the projections are most striking, with many of the Arabian countries ageing at breakneck speed after 2030.

If the UN is right, then, population ageing in the more affluent Asian and Latin American countries will run at a much faster rate than that of Europe and North America. This will speed up the ageing of the population globally.

By 2050, most countries in the world will have a higher proportion of their population aged over 60 than the UK has now. 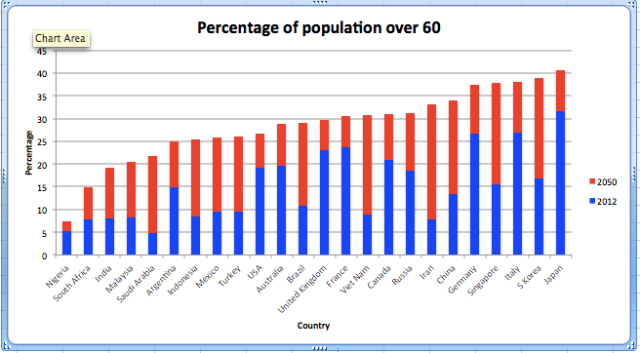 Last month, the OECD warned that economic growth is likely to slow down over the next few decades as the proportion of working-age people in the world declines. Without a compensating increase in productivity, reducing the proportion of workers will lead to slower growth. McKinsey estimated that advanced economies would have to increase their productivity growth rates by 60 percent to offset the effects of ageing.

That is unlikely to happen. Those born in 2000 will probably see much lower per capita GDP growth during their lifetimes than those born in 1980.

Even if we redefine what we mean by old age and increase the labour force participation rates among those over 65 we will still find ourselves with a smaller proportion of people in the workforce and therefore a higher dependency ratio. Unless the robots deliver a huge leap in productivity, we will not see the sort of growth rates we enjoyed in the last half of the twentieth century. Just at the point when we need more wealth and tax revenues to look after the elderly, economies around the world will be slowing down.

It’s difficult to over-state the importance of global greying. We have experienced nothing like it before. For most of history, the population profile was pyramid-shaped, with a lot of young people and a small number of old people. By the middle of this century it will be beehive-shaped, with the middle-aged and elderly forming a much larger proportion.

Thanks to improvements in health and life expectancy, a lot of you reading this will still be around in 2050. By then, the proportion of the world’s population over 60 will have risen from a tenth to a fifth. This is one of the biggest things ever to happen to the human race, on a par with world wars, the industrial revolution and the development of farming. It’s going to change much of what we used to think of as normal, economically, socially and politically. And it’s happening with astonishing speed.