I’ve never set much store by generational definitions. According to the Atlantic, the only one officially recognised by the US Census Bureau is the Baby Boomer. All the rest have been made up and fitted in around the original one. But even the Baby Boomer definition doesn’t really work for the UK because we had two distinct baby booms. The first was taller and sharper but the second lasted much longer.

As this chart from the Resolution Foundation’s Intergenerational Commission report shows, we had two periods after the Second World War where the annual birth rate was between 900,000 and just over 1 million. Because we have imported all the other generational labels from the US, our second baby boom is cut in half. The later part is labelled Generation X simply because we have shoehorned our demographic history into a set of labels designed in America.

Until the discussion of the various generations and their supposed characteristics became fashionable a few years ago, I had no idea that I was a Baby Boomer. (By some definitions, I’m not but let’s not over-complicate things.) The term had usually been used to describe the people born in the late 1940s and early 1950s. For the most part, it still is.

The Baby Boomers were the original Beatles fans and, later on, the hippies. They were the people who made the sixties swing, with their music festivals, fashions, protest and socially liberal attitudes. The summer of love, the political riots and social unrest of 1968, and festivals like Woodstock and the Isle of Wight are landmark events in what is often described as the Baby Boomers’ defining decade.

It was certainly a defining decade for me and my contemporaries. We were very preoccupied with being born and taking our first steps. While the hippies were trying to change the world, we were at playgroup. While they were spray-painting and singing protest songs, we were finger-painting and singing nursery rhymes. I didn’t know who the Beatles were until after they had split up.

So you will understand why many of us are somewhat bemused to find ourselves categorised as Baby Boomers when most of the usual stories told about that generation don’t apply to us. Many of us deliberately defined ourselves against the hippies. Punk was a reaction against up-itself hippie music. Part of its appeal was that it unnerved the trendy guitar-playing teachers almost as much as it annoyed the old buffers. The sharp and spiky music and fashions of the late 1970s and early 1980s were symbols of very different zeitgeist from the hippie era. The long hair, flowers, jangly music and trodden-on flares didn’t reappear until the end of the 1980s, by which time most of the teenage shoegazing fans were too young to have remembered them the first time around. Perhaps that is a more useful generational divide than the one plonked arbitrarily in the middle of the 1960s.

The second baby boom seemed to take the planners by surprise. Because it continued for ten years it put severe pressure on schools. People complain about class sizes now but the ones at my primary school contained over 40 children. I still have the school reports to prove it. At one point they were teaching classes on tables in the hall, which then had to be cleared away each morning for the school assembly. I can remember the poor teachers trying to control rooms full of unruly children. Some of them just couldn’t do it.

As time has passed, the bulge created by the 60s children has moved upwards through the ONS age profile charts. In the population report published in June, you can clearly see my generation forming that big lump which peaks at around age 50.

Population pyramid for the UK, mid-2015 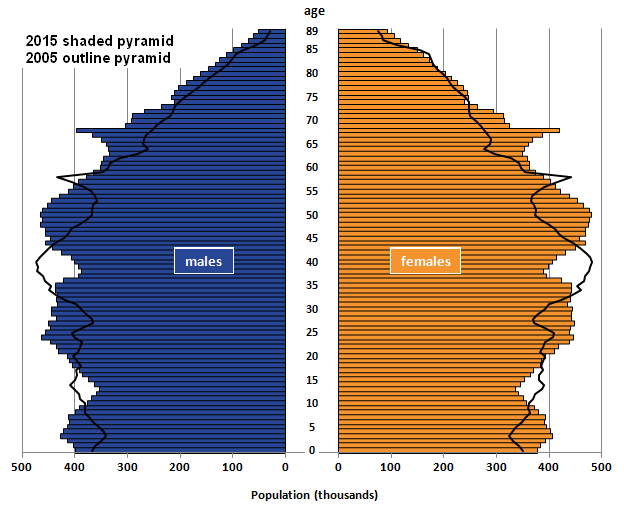 And this is where the problem starts. What caused trouble for the schools in the 1970s will   do the same for the health and welfare system over the next few decades. Many of those born in the 1960s will be hoping to retire in the next 10 to 20 years. The trouble is, they might not have very much money to do so.

Frances Coppola wrote a piece earlier this week on the rapid fall in interest rates since the 1980s and its likely impact on retirement incomes:

[T]he young adults of the 1980s paid the highest interest rates in history on their mortgages and car loans. Now, they are approaching retirement – indeed the oldest among them have already retired. And today’s ultra-low interest rates seem like a major betrayal. Where have the returns on their savings gone?

This is a bigger problem than it might seem. In the 1980s, companies started to replace defined-benefit pensions, which promised an income based on final salary, with defined-contribution pensions, where the returns on investment provide an income in retirement. By the mid-1990s, most defined-benefit schemes were closed to new entrants.

Replacing defined-benefit with defined-contribution didn’t seem that big a deal at the time. Some people even thought it was better. After all, with the rates prevailing at the time, you wouldn’t need a huge investment portfolio to generate quite a decent income in retirement. It never occurred to anyone that interest rates would fall.

Here too, then, my generation is different from those to whom the Baby Boomer label is usually applied. On the whole, the hippie generation has done rather well out of retirement.  For a number of reasons, they have hung onto the gains they made during their working lives. As the FT explained, there has never been a better time to be in your late 60s.

And as Andy Haldane’s report from his speech in July shows, even the recession years didn’t really do them that much harm.

It is unlikely that later generations will be able to pull off the same trick. As Frances says, membership of defined benefit pension schemes, those that pay out based on final salaries, has declined rapidly over the past fifteen years or so.

This is a problem for all generations, of course, but those of us born in the 1960s assumed  that the post-war world, in which companies provided decent pensions and investments yielded good returns, would last forever. Many of us changed jobs and found the old pension schemes closed replaced by defined contribution ones but didn’t think too much about it at the time. That the new schemes might not pay anywhere near as much barely occurred to us. Because we have less of our working lives left, we have less time to make up the shortfall. With incomes stagnating and interest rates so low, for many people it will be a daunting if not impossible task. Here’s Frances again:

For young people, today’s low interest rates mean that they have to save much more and take more investment risk to achieve the sort of income in retirement that the post-war generation had. But those who were young adults in the 1980s and 90s don’t have enough of their working lives left to build up the size of pension pot now needed to generate a comfortable retirement income. They are looking at a much less prosperous retirement than they expected.

Their wages have been stagnant for a decade, their occupational pensions are stuffed and their state pensions are receding into the distance. They are frightened of cuts to the healthcare they will need in retirement and worried that they may have to sell their houses to pay for their care.

Why should the retirement worries of the 60s children worry anyone else? Because prosperous pensioners, who tend to spend more on leisure than anyone else, may be all that is keeping  the economy in some parts of the country afloat.

We tend to assume that deindustrialisation is yesterday’s news. After all, the factories, mines and steelworks that used to dominate many of our towns are long gone. Their ghosts are still there, though, in the form of their pension schemes. Towns with no industry to speak of still have relatively prosperous pensioners drawing down the benefits from their old employers. In some parts of the country, income from occupational pensions accounts for around 8-10 percent of household income. In areas already heavily dependent on state benefits, the disappearance of this income could be catastrophic.

And disappear it will because the pensions of the next generation of retirees will be nowhere near as generous. In some towns, many of the young people are employed to run around after pensioners, in garden centres, in the hotels where they go for off-season breaks and the pubs where they enjoy weekday lunches. If the next generation can’t afford these things then the jobs will go.

And, as we can see from the charts above, there are a hell of a lot of 60s children. Imagine what will happen as that big bulge of people moves into hopelessly underfunded retirement. Having caused chaos in the school system at the beginning of our lives, we look set to do it to the entire economy at the end. This isn’t just a problem for people of my generation. It’s an economic disaster in waiting.

In all likelihood, most of us will have to work for a lot longer than we thought. Already our state pension age has been pushed out to 67, something which still seems to be news to many of my contemporaries. More than one actuary has suggested to me that by the time we get there it may be closer to 70.

One of the most famous TV dramas depicting the 60s-born generation was the recently received Cold Feet. Perhaps that is a better term for us than trying to squeeze us into definitions imported from the US. I quite like the term Cold Feet Generation. It neatly sums up how many of us feel about retirement.

26 Responses to Boomers and Busters