Globalisation: Not as big an elephant as we thought

Most of you are probably familiar with the Elephant Chart which shows the changes in the global income distribution over the three decades before the last recession. It came from a World Bank paper by Branko Milanovic and shows the increase or decrease in real incomes at each percentile. It shows big gains in the middle and lower percentiles, falling incomes at the upper middle while the very poor see almost no income growth and the very rich, as ever, see their incomes continue to rise steadily. 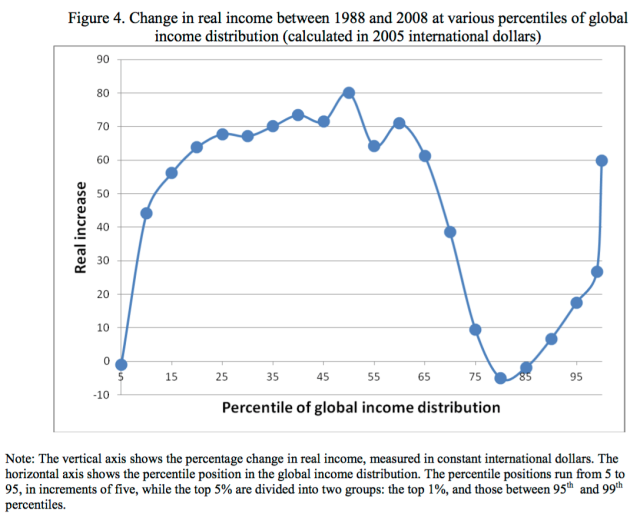 The chart has been cited a lot recently, especially when explaining the Brexit vote, the rise of Donald Trump and the growth of populist movements in the developed economies. The less well-off in the developing economies have done well and millions have been lifted out of poverty. At the same time, and some would say inevitably, skilled middle-earners in the developed economies have suffered as their jobs have been offshored and their wages have stagnated. It’s no-wonder they are angry, the story goes, because they have lost out while the poor of Asia have gained. A nationalist or socialist backlash against globalisation is therefore hardly surprising.

I have reached for this chart many times, especially when writing about Brexit and UKIP, but something always made me put it back on the shelf. I haven’t the time, the resources or the expertise to dig into the data behind it but I did wonder how far it applied to the UK and whether it was mostly the story of two big countries, China and the USA.

As it turns out I was half right. Adam Corlett of the Resolution Foundation has produced a very detailed analysis of the data which shows that the story is somewhat more complex than some people are making out. Before going any further, it is worth mentioning that the Resolution Foundation’s intention was not to trash Branko Milanovic’s work but to point out that some of the claims people were making about it are not really supported by the evidence.

Now before you switch off and assume that this is some dry academic argument, it really is worth persevering with the Resolution Foundation report because the story that emerges from it tells us so much about what has been happening to incomes and work throughout the world over the past thirty years. There is too much in the report to cover in one post but I will attempt to summarise the story about income distribution here and discuss some of the conclusions.

This is an argument that builds up stage by stage.

As more data became available, more countries were added to the data set. Most, through not all, were poorer countries. If you compare the data of countries that were in both the 1988 and 2008 surveys, the effect is less pronounced and the income drop in the upper middle percentiles disappears.

Because the population of poor countries has risen more quickly than those of richer countries, they now account for a greater share of the world’s population. The people at around the 75th percentile of the world’s income distribution were the poorer American workers in 1988 but by 2008 many of the people at that point in the income distribution were urban Chinese. But while the urban Chinese have seen their wages increase they are still, in real terms, not up to where US workers were in 1988. Therefore there is a dip in the curve at around the 75th percentile. The US workers are no longer in the same position on the distribution because population growth has pushed them up to a higher percentile.

As the Resolution Foundation explains:

This chart by Chris Giles shows how the poor US families have moved up the global income ranking.

The socio-economic groups who support Donald Trump might have been at the point where the curve dips in 1988 but they are not there now.

Globalisation wasn’t the only thing going on in the 30 years before 2008. In the former Eastern Bloc, the collapse of communism hit incomes of the poorest particularly hard. At the same time, Japan saw the bursting of its economic bubble. This dragged down overall income growth in the developed economies. The overall picture, then, is distorted by local single-country issues rather than global ones. Once you strip out Japan and the former communist countries, income growth in the rest of the developed world doesn’t look too bad.

This is the bit where I was half right. Incomes for almost all of China’s income distribution rose at a faster rate than that of most other parts of the world. If you control for population and remove Japan and the former communist countries, the elephant shape becomes less pronounced. Take out China and it disappears altogether.

So when you control for population and take out China, the ex-communist countries and Japan, income growth in the rest of the world looks remarkable even. Apart from among the very poorest and the very richest, it’s been somewhere between 30 and 50 percent at each percentile.

There are a number of conclusions that we can draw from this:

The figures on the elephant chart were skewed by things that happened in specific countries, such as the fall of communism, Japan’s stagnation and China’s rapid rise. What happened in China or Japan isn’t typical of the rest of Asia and what has happened in Eastern Europe isn’t typical of the rest of Europe. We should not assume a rise of Asia and fall of Europe story from these figures. There are also, as the Resolution Foundation report points out, local factors at work in the US and UK. For example, rising housing costs are a something of a British idiosyncrasy but you can’t draw conclusions about income growth in the UK without taking them into account.

If we then dig into the big variation between individual countries it becomes clear that even this weak income growth is not a universal feature of low and middle income people in developed countries, but instead driven by the experience of Japan (where the data appears to be plain wrong) and ex-Soviet satellite states (who faced big income falls as the Soviet Union collapsed). These income changes are important, but again tell us very little about income levels in Western economies.

It is true that the US has seen very poor income growth, with the rich benefiting the most from what limited growth there was. But that experience is to quite a degree one of US exceptionalism. Variation amongst the developed world should make us reluctant to accept that this is inevitable or simply driven by global forces.

The report is not suggesting that globalisation hasn’t brought challenges. It has clearly had a significant impact on employment in some industries but it is far from the only factor causing low income growth.

For the past quarter of a century we have been hearing about the Global Race in which lots of hard-working but low-paid Asians would take people’s jobs if they didn’t run fast enough, running fast being a metaphor for accepting longer hours, poorer working conditions and lower pay.

But, as Torsten says, “Weak income growth generally is rooted in domestic policy.” By and large, he says, rapidly rising housing costs and the collapse of a financial services industry which was a major part of our economy are to blame for the UK’s living standards squeeze.

For the future major benefit cuts for working families will dominate their living standards experience for the rest of this Parliament. Domestic policy matters. To fetishise globalisation as the cause of all our ills is to let too many domestic policy makers off the hook for decisions they make, for problems they leave unaddressed and for the lower incomes working people experience as a result.

For politicians shrug and say, ‘well that’s globalisation for you’ is not good enough.

The ‘triumph of neoliberalism’ is overstated

Neoliberalism isn’t a term I use very often as it is one that means a lot of different things to a lot of different people. However, every so often there is an article telling us that neoliberalism has ‘lifted millions out of poverty’. The problem with this is that most of those millions are in China so we could just as easily say that authoritarian state-capitalism has lifted millions out of poverty. Trying to generalise this success to a particular political or economic system misses the point. Trade liberalisation helped but the Chinese state organised itself to take full advantage. The reason rising incomes in China loom so large in the global statistics is because the country has one fifth of the world’s population.

So far the trick hasn’t been repeated by any other countries. The Resolution Foundation is not convinced that it will be.

We should note too that we cannot assume that historic trends will continue, something Milanovic himself warns us against. [57] Processes such as the o shoring of some manufacturing jobs from the UK or US to China may have already happened and be unrepeatable, and because of its remarkable growth China is no longer such a low paying nation. We do not know if India or sub-Saharan Africa will bene t from exporting, inward investment and rapid growth in the same way that China did, nor what impact global demographic trends will have. And new technologies may change the equation too, continuing to shift commerce into the digital realm while reducing the need for primary and manufacturing labour in both poorer and richer countries.

In other words, the phenomenal rise of China might be a one-off event brought about by a peculiar set of circumstances at a particular time. It doesn’t necessarily follow that other poorer countries will see similar income growth.

There is much more in this report, including some detailed discussion of UK incomes which needs a post all of its own. Altogether, though, if I had to sum up the report’s conclusions it is that the bogeyman of globalisation and its potential threat to our living standards has been exaggerated. Some of the causes of income stagnation and low wages in western countries are to be found much nearer home.

4 Responses to Globalisation: Not as big an elephant as we thought