The rise and fall of the rich pensioner

When I was a kid old people weren’t very well off. The words poor and pensioner often went together. I remember a poster (presumably by one of the age charities) which I used to pass on the way to my swimming lesson. It said something like, “Poverty and loneliness, the punishment for old age.”

That would have been sometime around 1972 when, as the FT explained earlier this week, the average pensioner’s income was in the bottom 20 percent.

It’s not like that now though. Forty years on, older people aren’t doing too badly. These days, you’re more likely to hear people talking about rich pensioners than poor ones.

I wonder how long this will last.

Earlier this week, the Ernst & Young ITEM Club reported that much of the increase in the workforce over the past five years has been due to older people either staying in work or going back to work. Rising participation by older age cohorts, it says, has added even more people to the labour force than immigration. People who ten years ago might have retired are now staying in work.

Some of this has happened because state pension age for women has risen and the statutory retirement age has been abolished. But, says EY, some of it is caused by deficient pension provision and this is likely to get worse.

[G]rowth in elderly employment also
looks to be a symptom of the need of many to keep
working in order to supplement squeezed
retirement incomes, in part a consequence of rock-
bottom annuity rates. The historical association between movements in annuity rates and participation by older people in the labour market certainly points to this being an important driver. 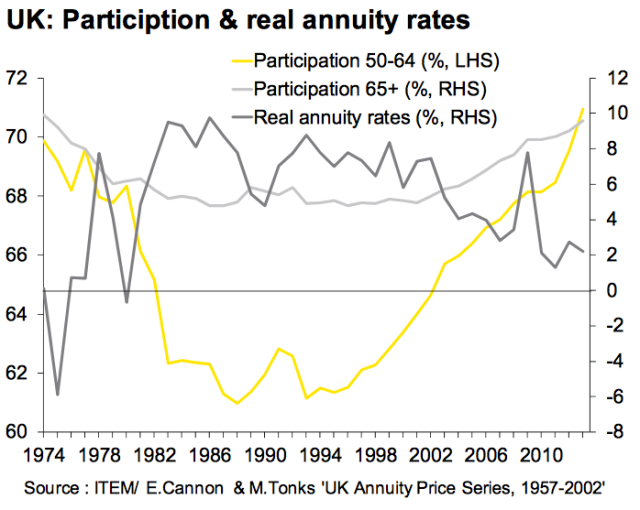 As pension incomes fell, first the over 50s and then the over 65s began to think again about retiring. The 1980s and 1990s were the heyday of early retirement. The proportion of older people working has been creeping up ever since.

EY think this will continue:

[I]t is likely that the steady upward trend in participation amongst the older age groups will continue, with greater longevity and deficient levels of pension saving remaining important drivers.

They’re probably right. The number of people in defined benefit pension schemes has been falling steadily too. 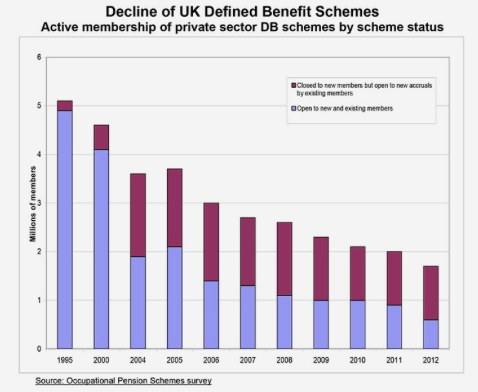 The DWP forecasts that the average defined benefit payment is about to go into a steep decline.

With even companies like John Lewis abandoning their final salary schemes and many company pension schemes underfunded, the days of generous retirement plans seem to be well and truly over.

As for the future of defined contribution schemes, that just looks plain scary.

Today’s pensioners are only well off because they lived and worked through a lucky half-century. The generous pensions they enjoyed look as though they will be a historical blip. Fifteen years from now, when the next demographic bulge retires, their incomes will nowhere near what retired people are on now. The stereotype of the rich pensioner is on the way to being obsolete.

12 Responses to The rise and fall of the rich pensioner