Osborne’s National Living Wage: Why it won’t work and why it just might

Despite all the rhetoric about the Conservatives becoming the workers’ party, George Osborne’s masterstroke National Living Wage (NLW) is really just another deficit reduction policy. The government has realised that the deficit is a labour market thing and that the only way to take big lumps off social security costs is for a lot of people to earn a lot more than they do now. Solution? Get employers to pay more, so fewer people will need in-work benefits and the welfare bill will go down. Or, to put it another way, get employers to cover some of the cost of deficit reduction. That way, you can cut welfare costs without causing social unrest and, with a falling benefits bill, you don’t have to cut as much off public services. Simple eh?

Why it won’t work

This won’t work, says just about everybody. Among others, the Institute for Fiscal Studies, the Resolution Foundation and the Joseph Rowntree Foundation have published reports with charts of doom explaining why most of those currently on in-work benefits will be worse off.

These IFS charts show the changes in income resulting from the tax and benefit changes announced in the budget and from the NLW, spread across the income distribution.

The Resolution Foundation’s analysis drew similar conclusions. The NLW will mitigate the benefit cuts slightly but those at the lower and of the income distribution will still take a big hit. 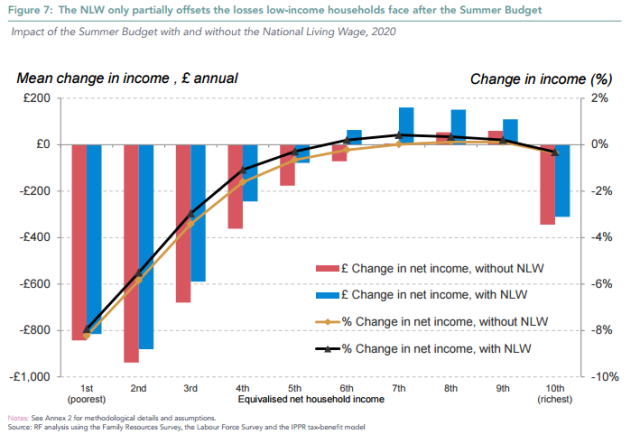 The NLW might also lead to some job losses or reduce the rate of job creation. The OBR puts the figure at 60,000 fewer jobs but others believe it will be much higher. Recruitment agency Manpower says that companies are already scaling back recruitment. If employers know they will have to pay higher wages but can’t be sure they will generate the revenue to pay for it, they might be tempted to increase the use of zero hours contracts or outsource more work to the self-employed.

Worse still, as Michael has shown, the cuts to tax credits fall disproportionately on those in-work. It might be that the work incentive, brought about by in-work benefits over the past two decades, goes into reverse. For the government, there is no point in reducing the in-work benefit bill only for the cost of unemployment benefits to rise.

If the government succeeds in taking £12 billion out of the welfare budget it is likely to lead to serious distress for many people and possibly social unrest, even with the rise in the minimum wage. If it fails to do so, it must either take more cost out of public services, increase taxes or abandon it’s deficit target. All these options will be politically damaging.

Having said all that, no-one can be sure about the impact of the NLW because the government has never pushed up the minimum wage by so much over such a short-time. Neither, for that matter, has any other country, although a few are now trying something similar. As the Economist says, what might happen when the UK, France, Germany and the US push up their minimum wage is anybody’s guess:

By moving towards sharply higher minimum wages, policymakers are accelerating into a fog. Little is known about the long-run effects of modest minimum wages. And nobody knows what big rises will do, at any time horizon. It is reckless to assume that because low minimum wages have seemed harmless, much larger ones must be, too.

If nothing else, the government is in tune with the zeitgeist and if the NLW fails, Britain will be in good company.

But there were blood-curdling warnings about job losses in many countries when minimum wages were introduced. Most of them came to nought. Economic theory might say that such a wage hike will lead to job losses but we can’t be sure.

First, paying workers more than the bare minimum discourages them from shirking. They give more effort during their working day. And firms don’t need to employ so many managers to supervise their shirking workers, thus saving money.

Second, higher wages mean workers are keener to hold on to the job in question. They don’t hand in their notice so often and that reduces the firms’ turnover costs. It’s expensive and time-consuming to advertise for new employees, to interview them, to process their paperwork and to train them up.

Finally, decent wages relative to the rest of the market can mean workers are more loyal. They feel more valued and are prepared to work harder as a result. Most of us can probably relate to those explanations.

There is evidence from low-paying sectors to back this up. An LSE study in the care home sector found that higher wages reduced the level of shirking and the amount of supervision needed for care assistants. This, concluded the authors, is “indirect evidence of productivity enhancing effects of higher wages”. A NIESR paper earlier this year found:

But, as with the labour cost increases, there is a concern that these effects capture an element of mean reversion (the tendency for low-productivity firms to catch up to the industry average).

In other words, it could be that a hike in the minimum wage might increase efficiency in that long-tail of poorly managed low productivity firms.

If people cost more, it might also encourage firms to invest more. At an ACAS discussion I went to earlier this week, John Lewis chairman Charlie Mayfield gave an example of this from his sector. In many French supermarkets, the prices are updated with digital displays on the shelves. There is no point, he said, in doing this in the UK as it is cheaper to pay people to go round and update the prices. In France, however, with labour costs being much higher, the investment in the computerised system pays for itself. There is some evidence that the UK’s low wage economy is encouraging low-tech low productivity businesses. Increased labour costs might help to reverse that trend.

More expensive workers might also be an incentive for employers to invest more in them. If you have to pay more for your people, it makes sense to get the most you can out of them. Training them and training people to manage them more effectively becomes more cost-effective if labour costs are higher. Increasing the minimum wage might stop the decline in training which has pretty much tracked the fall in wages since the mid-2000s.

If the NLW were to kick-start a productivity boost it would be good news for George Osborne. As Adam Corlett said, if productivity were to grow at the rate it did in the 1970s and 80s for the next five years, we wouldn’t need any spending cuts at all. That’s unlikely to happen but any productivity growth above the forecast would be a welcome bonus for the chancellor.

Even so, an unexpected productivity boost and higher pay rises probably wouldn’t be enough to offset the benefit cuts. As Paul Johnson said:

[T]he increase in the minimum wage simply cannot provide full compensation for the majority of losses that will be experienced by tax credit recipients. That is just arithmetically impossible. The gross increase in employment income from the higher minimum wage is about £4 billion. Welfare spending as a whole is due to fall by £12 billion and, even excluding the effects of the four year freeze tax credit spending is due to be cut by getting on for £6 billion.

But then again, it doesn’t need to. At least, not completely.

Now, before you tell me I have taken leave of my senses, I think that even this is unlikely. The numbers the chancellor needs to make up are so big I still reckon he will end up shifting his deficit target or quietly raising taxes.

And yet, I still can’t help thinking what if, what if….?

I can’t quite banish from my mind the possibility that George might pull this one off, that he might just stagger across the deficit finishing line, battered and bruised but having avoided a major political catastrophe. If he does, surely the Tory leadership and the 202o election will be in the bag.

12 Responses to Osborne’s National Living Wage: Why it won’t work and why it just might