The gig economy: don’t give up your day job

Everybody seems to be talking about the gig economy at the moment. It’s an ill-defined term but basically it means more people making their living by picking up bits of freelance work through online marketplaces.

Every so often, a survey, usually by an agency or a freelancers’ organisation, tells us that a large proportion of the US workforce (usually somewhere between 30 and 40 percent) is now self-employed and that the number will inevitably rise, possibly to 50 percent, by the end of the next decade. This has perplexed many American economists and business writers who point out that there is no evidence behind these claims and quite a lot to suggest the opposite. As Bloomberg’s Justin Fox points out, the surveys with these big numbers include anyone who has done some freelance work over a given period and would include “an 18-year-old who lives with his parents and plays video games all day but occasionally mows neighbors’ lawns or walks their dogs”.

Josh Zumbrun, in the Wall St Journal, says the US economy is actually getting less giggy, with the proportion of self-employed people falling in recent years. 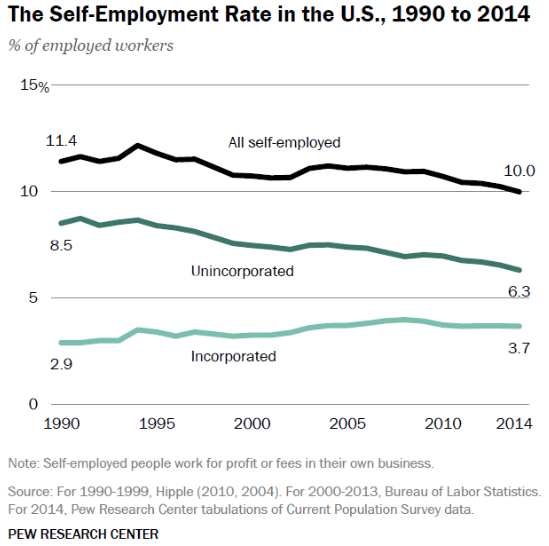 In the UK there is at least has some data to support the notion of the gig economy. The proportion of self-employed workers rose to a record high last year and, though it has eased off slightly since, it is still high by historical standards.

Even so, says Laura Gardiner, it is not clear whether this represents a new economic model or just the lack of employment opportunities after the recession. The data give mixed messages:

Maybe there are signs of the gig economy in the jobs self-employed people are doing? Here, the picture is mixed – the three biggest growth sectors for self-employed workers since 2009 have been hairdressing, cleaning and management consultancy. Granted, these services could be traded in the gig economy, but they’re also jobs with a history of growing self-employment incidence that pre-dates the birth of the online marketplaces we’re talking about. The next biggest riser is ‘renting and operating real estate’, which – promisingly – could reflect people offering their homes and driveways online. On the other hand, taxi operation is the biggest faller, perhaps quelling the suggestion that Uber is taking over.

That said, it is possible that some of the gig economy doesn’t get picked up in employment stats. It could be that people in employment are doing bits and pieces of freelance work, using online marketplaces. The standard figures on who is employed or self-employed, full-time or part-time and permanent or temporary might be hiding a lot of freelance activity.

My hunch is that some of the rise in self-employment reflects a longer term change in the nature of work. As the Economist said a couple of weeks ago, if the jump in self-employment had been caused by the recession it would have fallen more quickly once employment started to recover. All the same, the idea that, five years or so from now, many people will earn their main living from picking up bits of freelance work is fanciful.

The astonishing collapse in self-employment income over the last decade or so shows just how difficult it is to make a living from freelancing. There may be a record number of self-employed people but their share of the UK’s turnover and the overall cash amount they earn between them have fallen. It’s rather like one of those nature documentaries where, as the drought sets in, more and more animals arrive to drink from an ever-shrinking water hole. As Paul Nightingale and Alex Coad point out, the typical British startup just adds to the churn by putting another small firm out of business. It’s likely to be the same with giggers. The more of them there are, the less each one will earn.

That’s the trouble with gigging. A few big bands make good money from but most play in small venues for beer money, or sometimes just for fun. The gig economy might be good for supplementing income but it is no substitute for proper paid work. As the old showbiz saying goes, don’t give up your day job.

4 Responses to The gig economy: don’t give up your day job