Whatever happened to The Debt?

Remember The Debt? The Debt was a really Bad Thing ten years ago. The sheer hugeness of it was going to drag the country down, cripple the economy, turn us into a pariah on the international markets and bankrupt the country.

The Conservatives managed to weaponise The Debt so successfully that it was able to beat Labour in two elections. Despite the evidence being pretty flimsy, the Labour Party never managed to kill the story that it was to blame for The Debt. It also helped to cajole the Liberal Democrats into coalition. After all, it was a national emergency. Time to pull together. Stop all the party infighting or The Debt will get you.

Nobody talks about The Debt any more. Even the chancellor barely mentions it and the threat of a downgrade by Moody’s, which would have seen panic headlines ten years ago, hardly made the news. It hasn’t gone away though. In real terms it’s bigger than it has ever been and as a percentage of GDP it has only recently started to fall. It’s certainly a lot bigger than it was in 2010. Ten years ago a debt-to-GDP ratio of 60 percent was going to cripple us. Nowadays, it seems, 80 percent is nothing to worry about. Politicians in both the main parties are now so relaxed about it that they are happy to see it grow again. 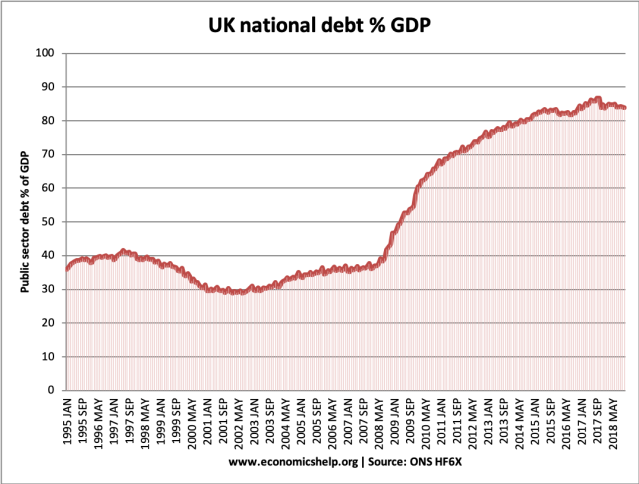 The Resolution Foundation and the Institute for Fiscal Studies have both attempted to calculate what the main parties’ manifesto commitments would mean for the public finances. Both the Conservatives and Labour are promising to increase spending. The Resolution Foundation noted that the word ‘Invest’ appeared more often in both manifestos than ‘Brexit’, ‘NHS’ or ‘Environment’. The trouble is, neither party is keen on increasing taxes to pay for it.

As Chris Giles pointed out, while the Conservatives plans are a lot more modest in terms of spending than Labour’s, there is a big expensive promise in their manifesto:

3. The Tories have no costing for social care

The Conservative manifesto contains one expensive pledge on future financing of social care, by saying that “nobody needing care should be forced to sell their home to pay for it”. The party does not cost this pledge. Labour’s proposal of free personal care — help with daily living but not accommodation costs — was costed at £10.8bn a year, indicating that this is a large omission by the Tories. The Conservatives therefore have a large hole in their manifesto costings, which implies additional tax increases, more borrowing, or public spending cuts elsewhere.

Then there is Brexit. On Page 5 of the Tory manifesto, in bold, it says:

“We will not extend the implementation period beyond December 2020.”

Almost nobody with any experience or knowledge of trade deals believes that it would be possible to agree one with the EU in such a short time. Former trade negotiators have warned that the UK is likely to be in another Brexit crisis this time next year as the deadline looms and a trade deal still hasn’t been negotiated.

The Conservative commitment, then, is almost a guarantee that there will be a severely disruptive hit to the economy at the end of next year. Once you factor the lower economic growth into the manifesto costings, says the IFS, the public debt level under the Conservatives is likely to be even higher than under Labour. 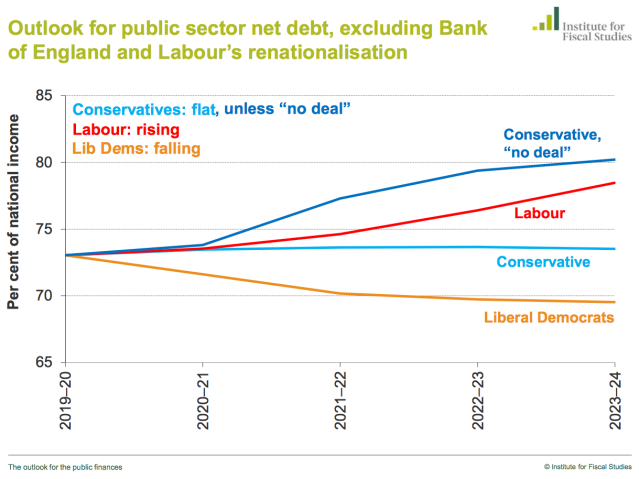 A party that spent the best part of ten years banging on about The Debt is, apparently, now happy to see it rise. Everything, it seems, must be sacrificed on the alter of Brexit. The Debt is yesterday’s news.

12 Responses to Whatever happened to The Debt?