The 2019 deficit target is still a big ask

Despite the usual post budget hullabaloo, the only thing remarkable about Wednesday’s announcements was just how little the overall picture has changed. As Gemma Tetlow of the IFS commented, when it comes to tax and spending the giveaways are mostly matched by the takeaways.

It’s a similar story for the wider economy. Here’s the OBR’s opening statement:

In the relatively short period since our last forecast in December, there have been a number of developments affecting prospects for the UK economy and public finances both positively and negatively. These include a further big fall in oil prices, an unexpectedly large increase in net inward migration, further falls in market interest rates, another disappointing quarter for productivity growth, downward revisions to estimates of economic growth in 2014 and downward revisions to the outlook for the world economy. These have had a relatively modest net effect on our forecasts for real GDP growth and the public finances.

Some good stuff happened and some bad stuff happened to cancel it out. Like the chancellor, the economy giveth and it taketh away. The underlying position of the public finances is pretty much unchanged.

The only major difference between this budget and the last autumn statement is the Chancellor’s decision not to go for a £23 billion surplus in the last year of the decade. Given that he only sprang that idea on us in December, reversing it doesn’t change what we already knew from this time last year. (See yesterday’s post.)

Although the government’s spending plans imply an easing off in the last year of the next parliament, the cuts needed to eliminate the deficit in 2019 are still as severe as ever. We are still looking at a reduction in public service spending of nearly £40 billion after this year and even more for those departments outside the ring-fence. 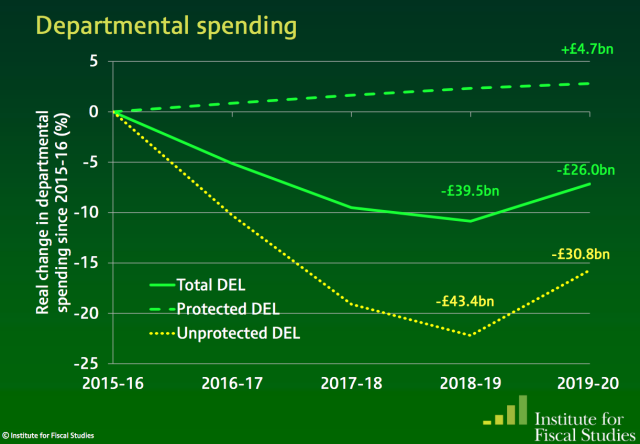 The squeeze would come in the middle years of the next parliament and would, says the OBR, require bigger cuts to day-to-day public service spending (Resource DEL) than anything we have seen so far.

When it comes to spending cuts, then, nothing has changed. The chancellor hasn’t eased up on austerity, he has just eased up on the additional austerity he announced in December. Eliminating the deficit by 2019 is still as big a task as it ever was. Even before the additional targets announced in December, hitting the deficit target just by cutting public services looked unlikely. As Giles said, after leaving his job with Vince Cable:

For my last few months I asked every friendly expert I could meet: do you think the figures in the latest OBR report that suggest there will be less than £300bn of RDEL spending in 2018 are credible and achievable? I never met anyone who would say yes. Mostly they looked on me as some sort of naif. I remain slightly confused at why the OBR itself doesn’t say this.

And as IFS Director Paul Johnson remarked after the 2014 budget:

It is…a Budget which leaves us with as little sense as we had before of quite how the very large public spending cuts still in the pipeline will actually be delivered.

The “rollercoaster” promise to increase spending again in the last year of the next parliament is neither here nor there. With the cuts that would be needed in the previous years, some public services would simply cease to exist by 2020. The extra spending would ease the pressure on those left standing but by then the damage will have been done.

The numbers may change slightly but the dilemma remains the same. No government will be able to eliminate the deficit without cutting public service spending or raising taxes. Either taxes go up, or government borrowing continues into the next decade, or some public services disappear. To pretend otherwise is still as much the politics of La La Land as it was last year.