Brexit as a bad career move

Among those shouting loudest about EU bullying and punishment are people who also claim to be advocates of the free market. This strikes me as slightly odd because Brexit is, effectively, the UK market-testing its power and prestige in the world. Those who took us down this road assured us that the UK was such a powerful player that leaving the world’s largest trade bloc would actually make us better off. We would get the exact same benefits, other countries would be desperate for trade deals with us and the EU, terrified by the loss of one of its biggest members, would fall over itself to conclude the easiest trade deal in history.

Two years later, things are looking a little different. As a series of reports out this week show, all the Brexit options are likely to leave the UK worse off than if it had stayed in the EU. The most revealing part of the Treasury’s Brexit analysis is how little difference new trade agreements are likely to make to the UK’s GDP after Brexit. Even with generous assumptions about who we will do trade deals with (see footnotes on Page 22.) the impact is a tiny 0.2 precent of GDP, nowhere near enough to offset the losses from increase trade friction with the EU. 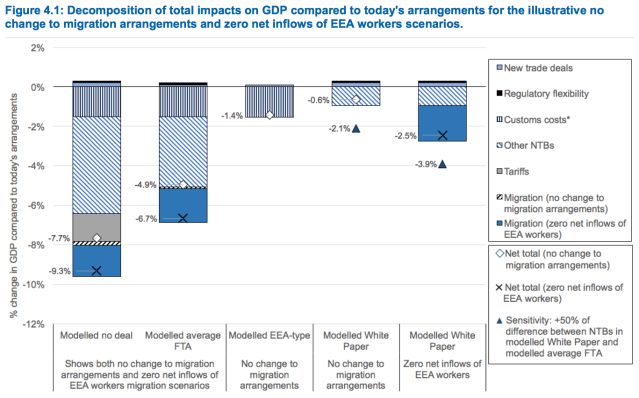 All Brexit scenarios are bad and the further away we move from the single market and customs union the worse they get. It looks like the world out there is tougher than the Brexiters led us to believe.

All this talk of it not being fair or the EU acting like the Nazis and punishing us for leaving reminds me is the kind of petulance you hear from the bloke who walks out of his job and then fails to get the better one to which he had assumed he was entitled.

I have known a few such people over the years. Very occasionally they are right but most of the time they get a huge shock. What they fail to realise is that a proportion of their salary is a function of their place in the corporate system. If they have worked in the same company for a while, their progression is based, in part, on their knowledge of that company and their ability to work within it. Likewise, the way they are treated by others is based on their employment status. The fact that they get appointments, sit in the fist class lounge and everybody wants to talk to them at conferences isn’t because they are ‘just bloody good’ it’s because of who they work for. This often comes as a shock to those who go freelance. As a senior executive in PoshBigCo plc, everyone wants to know you. As MD of MeAndAFewMates Ltd, it’s a lot more difficult.

So, more often than not, our overconfident executive finds it more difficult to get higher-paying work in the outside world than he imagined. Not that he is discouraged. You’ll hear him sounding off in the pub about all the ‘idiots’ who are making ‘silly offers’. “I’m worth much more than that,” he rants. “I know what I’m worth and I’m holding out for it.”

The UK’s exercise in testing the market has revealed that our worth, too, is a lot more tied up with the organisation we were part of than we cared to admit. Other trading partners prioritise deals with the EU. Even the commonwealth countries are more interested in building trade relationships with the EU than with the UK. They would, of course. It’s much bigger. To be fair, they did warn us that we would lose influence if we left the EU but we chose to ignore them. It is true that the UK is still one of the major economies in the world but much of its prestige and influence now rests on the fact that it sits at the intersection between the western military alliance, the anglophone world and the EU. Jettisoning one of those key components makes us less interesting to people.

To stretch the jobseeker analogy, all the offers so far have turned out to be worse than his old job. All pay less and have less security and benefits than the one he has just walked out of. The best offer so far is to go back to his old employer as a contractor, only on slightly less money than he was on before and without a seat on the executive team. Worse still, there’s a serious risk he might end up having to take orders from people he once considered to be junior.

It’s been some time now since he handed in his notice and he really needs to get something sorted out soon. Curiously enough, his old company have kept his job open. He can go back any time, with all his pay and benefits and his seat at the top table. But he won’t because that would make him look a bit silly. He’s still there at the bar, insisting that all he needs is a bit of self-belief and some tougher negotiation and that elusive great deal will soon come his way. His friends roll their eyes, shrug their shoulders and walk away.

23 Responses to Brexit as a bad career move