Immigration and the ‘left behind’

Statsmeister Michael O’Connor produced this gem of a chart a few weeks ago, breaking down the post-recession employment recovery by region, type of employment and country of birth. It shows how much of the job growth outside London has come from self-employment, especially for those born in the UK. Even now, there are still fewer people in employee jobs in Yorkshire and Humberside than there were before the recession. Among the UK-born, there are fewer people in employee jobs in Yorkshire, the Midlands, Scotland and, most surprisingly, the South-East. 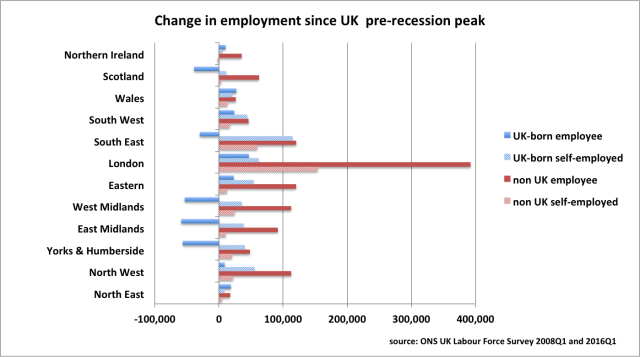 Some of this might be due to demographic change. The population of working age UK-born has fallen in some areas. But that wouldn’t explain why there has also been a growth in self-employment among the UK-born. If it were simply a case of there being fewer of them, surely the number of self-employed would fall too.

Mobility, and the lack of it, provides some explanation for these patterns. In any society, people in their twenties and early thirties, without children, tend to be the most mobile. They are free to travel for work and happy to live in relatively basic accommodation. After all, it won’t be for long and the money and experience will set them up for a (hopefully) more stable future.

The effect of free movement of labour throughout the EU has been to gather all these people, across Europe, into a single labour pool. It is a pool in which British employers have found it easy to fish. With English being the most popular second language in Europe and wages in the UK being relatively high, it was inevitable that a lot of these people would be attracted to the UK. As a Centre for Population Change report published earlier this year showed, the proportion of people in their twenties and thirties is much higher among EU migrants than among the UK-born population 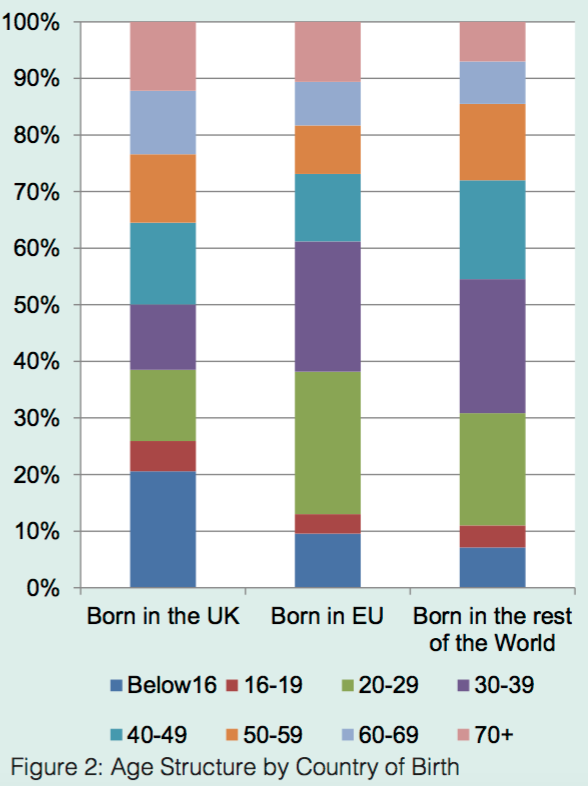 These are the people who can move most freely across the continent, making them highly responsive to the demand for labour. (More on this in last week’s post.)

Many of the UK-born population find it difficult to do some of the jobs current filled by migrants. It’s not because they are lazy it is simply that the sort of flexibility the migrants provide, and employers have come to expect, is hard to maintain when you have a home and a family. As Sarah O’Connor said:

When people say “migrants are doing the jobs that Brits are too lazy to do”, they are missing the point. These jobs may be palatable if you are a single person who has come to the UK to earn money as a stepping stone to a better future. But if you live here permanently, have children here, claim benefits here, they are not jobs on which you can easily build a life.

James Gleeson produced an interesting chart earlier this week showing how the geographical centre of gravity for jobs has shifted further south over the past decade or so, while the people and, especially, the housing have lagged behind. (He explains the methodology behind it here.) 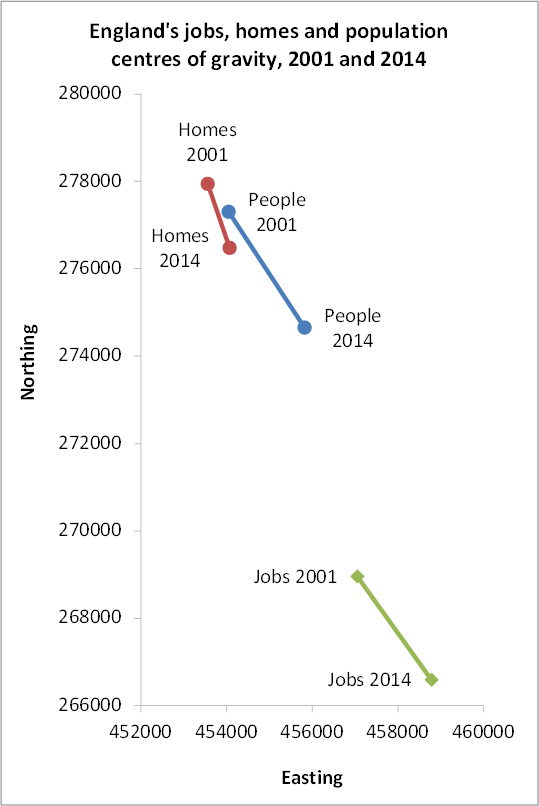 To a certain extent, then, people are following the work but many are, for obvious reasons, staying where their families and accommodation are.

Recent research by the Joseph Rowntree Foundation suggests that there is a similar problem in microcosm in many of the large cities. The prosperity of the shiny new city centres in Manchester, Leeds and Birmingham does not flow to the areas round about. This doughnut problem sees unemployment and underemployment in the periphery of major cities existing alongside unfilled jobs in the city centres. A mixture of skills mismatches and poor transport disconnects suburbs and small towns from the employment opportunities in the cities close by.

Perhaps this explains some of the rise in self-employment among the UK born in the Midlands and North. In the absence of new local jobs, people have set up their own businesses. The trouble is, as Paul Nightingale and Alex Coad point out, a lot of these businesses are likely to be marginal, lacking the capacity even to provide a minimum wage income for their owners. The vast majority of businesses set up in recent years have turnover below the VAT threshold and the incomes of the self-employed have collapsed since the recession. Even so, subsistence-level self-employment is preferable to no employment at all.

This raises another question though. If we hadn’t had free movement of labour and a young mobile workforce on tap, would the labour shortage have forced employers to train more people and to move to areas where they could find workers? Might they have had to put a bit more effort into using the workers we already had available in the UK? Or might it simply be that, without the ready supply of migrant labour, a lot of the jobs and a lot of the companies that have appeared since the recession would simply not exist?

The end of free movement of labour probably won’t make us any the wiser. The effects will be dwarfed by the economic downturn. As Jonathan Portes notes, there are already signs that the weakening UK economy is making the country look less attractive to migrants. The Resolution Foundation points out that, even if annual migration is cut to below 100,000, any increase in wages brought about by the resulting labour shortage is likely to be cancelled out. The pay squeeze caused by the economic shock of Brexit will obliterate any gains.

Their report showed that, while immigration does create some downward pressure on pay, it is nothing compared to the effects of an economic slowdown. Recessions hit people’s pay packets much harder than migrants do.

The next recovery will be different from the last one. Recessions and recoveries always are. Whether the absence of free movement of labour from the EU will make much difference to the overall pattern of job growth is difficult to say. Without concerted effort from government and employers on infrastructure, training and technology, it looks unlikely that much will change. Without that, Brexit or otherwise, the workless, the underemployed and those in precarious jobs probably won’t see much improvement.

22 Responses to Immigration and the ‘left behind’