The Oxford Mail has published an exchange of letters between David Cameron and the Conservative leader of his local council, Ian Hudspeth, in which the prime minister expresses his concern about cuts to local services. In reply, the council leader politely explains that he is simply implementing the prime minister’s policies and that the amount he needs to save means that frontline services will inevitably be hit.

David Cameron tells the council chief that he is “disappointed” by the scale of the proposed cuts and asks him why he can’t make savings to back office services instead.

There is sense of deja vu about all this. David Cameron was banging on about back office savings five years ago. The problem is, councils have already made most of the back office savings they can safely get away with. As the council leader explains, Oxfordshire has done all the things the government recommended. It has set up back office service centres, cut its top two tiers of management by 40 percent, shared services with Hampshire and frozen pay. There isn’t much more left to squeeze out.

It is, as George Monbiot says, as though he’s talking to a slow learner. The prime minister is still talking about things were being discussed years ago. It’s like the kid who hasn’t been paying attention asking a daft question in class. No, Dave, we did King Alfred last term. We’re on the Normans now.

As the IFS reported just before the election, local authority budgets were cut by around a fifth during the last parliament, more if you exclude health, education and emergency services.

Councils coped with this by digging into reserves and by making some of the biggest cuts in percentage terms to services that are not very visible, such as planning and regulatory activities.

Cuts to planning and building control will go largely unnoticed until, at some point, someone asks why so many sub-standard houses were built, so many flood plains developed or so many nightclubs and betting shops opened in a given area. The reduction in safety and environmental health inspections will only come to light when people get injured or there is an outbreak of food poisoning.

The National Audit Office calculated the real-terms reduction in local government income to be 25 percent between 2010-11 and 2015-16. It broke down the impact on services in a slightly different way.

The only service to get an increase in spending was children’s social care which is, of course, one of the most visible and high-risk of all council services. Mess that up and you are in serious trouble.

None of this is going to get any easier. Earlier this week the Resolution Foundation published a report on the future shape of the state. Rising debt payments and a social security bill kept high by pensioner benefits means that the only way to eliminate the deficit is to cut public service spending. 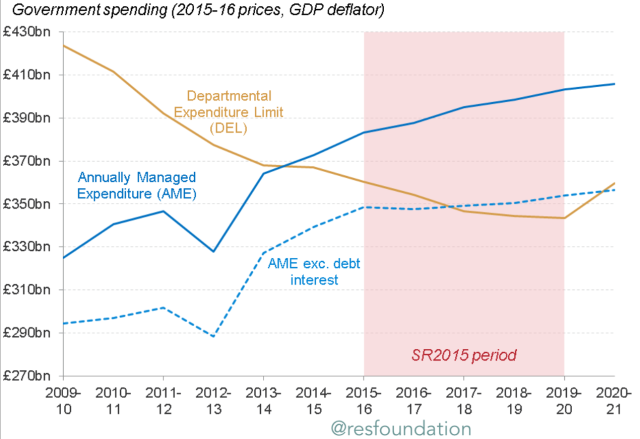 As the overall public service pot gets smaller, protected services take up an ever greater proportion of spending which squeezes everything else. Local government funding is part of that shrinking pink bit at the end. 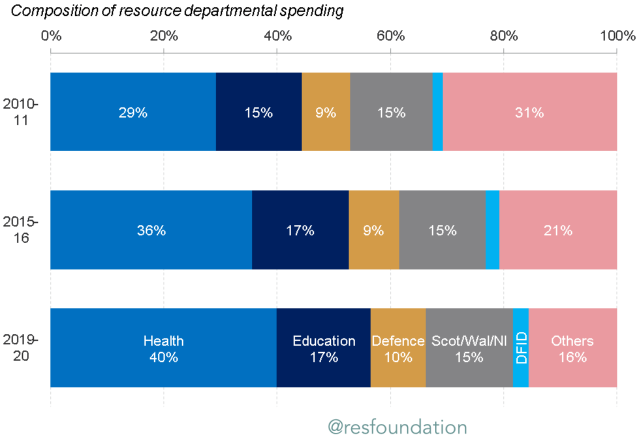 This time last year the National Audit Office raised doubts about the financial sustainability of more than half of the country’s local authorities during the 2015-20 parliament.

It also remarked that the Department for Communities and Local Government was not monitoring the impact of the cuts, that “its knowledge of service sustainability is limited” and that it “risks becoming aware of serious problems with the financial sustainability of local authorities only after they have occurred”. In other words, it really has no idea what effect the spending cuts have had so far.

Neither, it seems, does the prime minister. If you fail to understand what local councils have done over the past half decade, you can have no idea whether or not they will be able to cope during the next one. As Giles says, if you take a pint of blood from someone once they will probably be fine. Take another one a couple of days later and they might feel a bit sick. Take a third pint a few days later and they will probably fall over. It’s much the same with organisations. There is only so much you can take. A lot of local authorities are getting close to the falling over stage. Homilies from a prime minister, five years out-of-date, are not really going to help.