Rachel Reeves caused a bit of a stir at the weekend when she said that people earning £60,000 don’t feel rich and should not pay extra tax.

The focus should be on a privileged few right at the top, and that’s not people earning £50,000 or £60,000 a year. If you’re a single-earner family in the South East on [that income], you don’t feel particularly rich, and you’d be aggrieved that people earning between £150,000 and £1 million are getting a tax cut. We don’t have any plans or desire to increase tax on people in that band of income.

She didn’t actually say, ‘£60k isn’t rich’ but that was the headline that appeared soon afterwards. 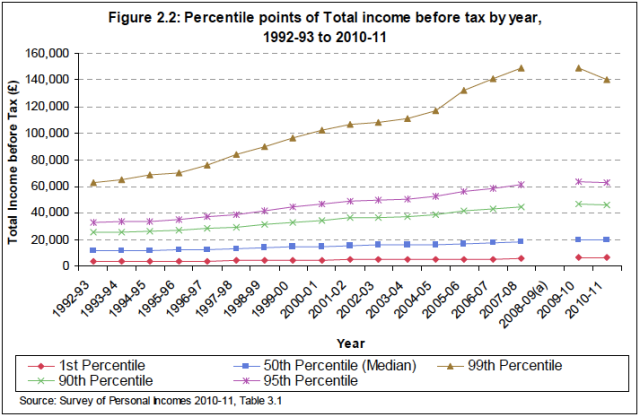 If you want to check out the exact percentile in which your income falls (and I’m sure you do), you can download the full table here.

If you earn £60,000 a year, then, you are earning more than 95 percent of the population and almost twice as much as the highest earners in the bottom three-quarters. To most people, £60,000 will make you look comfortably off, at the very least.

But Rachel Reeves doesn’t want to increase taxes on those earning £60,000. She hints, although she doesn’t actually say, that the top 1 percent should pay more.

Both the main parties are playing a little game with the voters. They would have us believe that ‘ordinary people’ won’t have to pay for the hole in the public finances that the next government will have to tackle. The left say that will tax ‘the rich’, the right say that the gap will be closed by cutting payments to dole scroungers and  sacking a few more useless public servants. The soothing message from both sides is that someone else will cover the costs. You, Mr and Mrs Ordinary Voter, will not see any tax increases or any degradation in the public services on which you have come to rely.

Whoever wins the next election will have to find another £25 billion a year, either from taxation or from cuts to public services and social security – cuts on top of the ones implemented during the current parliament. IFS Director Paul Johnson reckons that trying to plug this gap with spending cuts alone will lead to a complete collapse of some public services. According to calculations by Murray Rothbard, based on HMRC figures, the top 1 percent would need to be taxed at 65 percent to raise an extra £25 billion. It is unlikely that even a Labour government would go this far.

The most likely outcome is further spending cuts and tax increases during the next parliament, with the balance being more towards cuts under a Tory-led government and more towards tax under a Labour-led one. What is absolutely certain, though, is that ‘ordinary people’ will feel the pain. They will see cuts to public services or they will have to pay higher taxes. If Labour wants to avoid further cuts and implement some of its new ideas, it will have to increase taxes for all but the poorest. Even if they manage further spending cuts, the Conservatives will still have to raise taxes by at least the equivalent of 1p on income tax.

I’ve got some news for people on £60,000 a year. You might not feel rich but, before the decade is out, you will be paying more tax. Don’t let politicians from either side kid you otherwise.