The witch-hunt against freelancers goes on. (See here, here and here.) If the Daily Mail is to be believed, (I know, I know) George Osborne is about to ban the use of interim managers in the public sector.

But, while even the so-called quality newspapers have been blathering on about Moira Stuart’s private company, a far more significant story about the self-employed received much less coverage. The CIPD’s John Phillpot has been doing some research into the self-employed population, which is now at record levels. He found that the 8 percent net rise in self employment since 2008 “has offset around 40% of the loss of employee jobs, helping to dampen the rise in unemployment during and since the recession”. So opting for self employment is keeping people off the unemployment register and off benefits. He also found that 89 percent of these newly self-employed people work less than 30 hours per week.

So who are the new self-employed?

Almost a quarter of the UK’s self-employed people work in construction, but the number of self-employed construction workers is currently lower than in 2008 (Table 5). By contrast, sectors with relatively small shares of self-employment – notably education, information and communications, financial and insurance services and public administration, defence and social security – are among those which have seen the biggest proportional increases in self-employment in recent years. 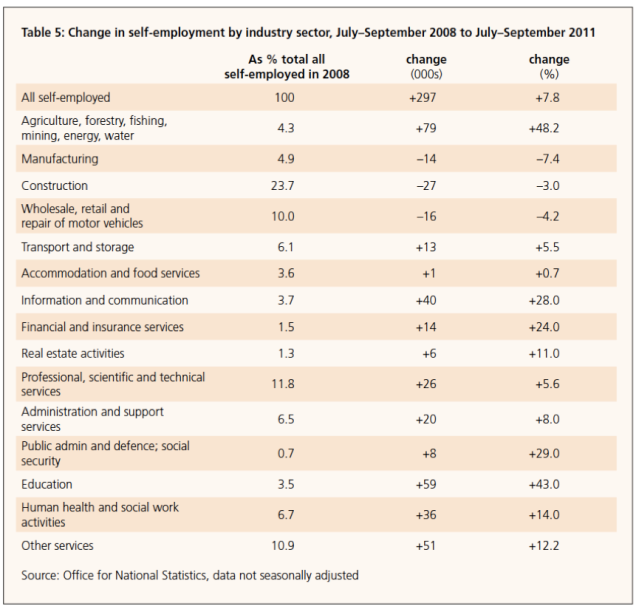 Self-employed public administration professionals up by 29 percent. That will be where some of these public sector freelancers are coming from then.

It’s not difficult to see what is going on here. Rather than sign on as unemployed, a lot of people made redundant from professional, managerial and technical roles have decided to try their hands at going freelance. Many of them are not getting a lot of work but seem to have decided, for the time being at least, that underemployment is preferable to unemployment. As Dr Philpott said:

It’s good that these self-employed ‘odd jobbers’ are helping to keep the lid on unemployment in a very weak labour market but their emergence hardly suggests a surge in genuine entrepreneurial zeal.

This is not a story of tax-dodging fat-cats but a story of casualisation in sectors where self-employment was once relatively uncommon, and of under-employed people with one-man companies scratching around for work.

As I said when I wrote about this last month, the rise in self-employment is no cause for celebration. For many of the new freelancers, life will be much less secure and nowhere near as well paid as their corporate or public sector roles were. David Blanchflower said, “For most people, becoming self-employed is a bad idea.” Sadly, that may turn out to be true for many of the new freelancers.

An OECD paper published at the end of last year noted that high levels of self-employment are a feature of less affluent economies:

As a percentage of total employment

So Luxembourg, Norway and the USA have low levels of self-employment while those of Mexico, Greece and Turkey are much higher. Outside the OECD the levels are higher still with over 30 percent on average in Latin America. It comes as a surprise, especially to Americans, to learn that America is not a small business country, but it shouldn’t. Most rich countries aren’t.

The OECD cites the rise in self-employment as a significant factor contributing to the UK’s increased level of inequality over the past three decades:

About one-half of the increase in individual earnings inequality is explained by changes in self-employment income as on the whole the self-employed earn less than full-time workers. Their share in total earnings increased by one fifth since the mid-1980s and among the self- employed, the gap between high and low earners has risen.

The findings from John Philpott’s report give a similar picture. Many of those who have become self-employed since the recession are under employed and almost certainly earning less, and therefore paying less tax, than they did when they had permanent jobs.

The post-recession increase in self-employment is a symptom of a weak economy and the creeping casualisation of work in sectors, like government, which were once seen as stable and secure. That tells us far more about our economy and our society than the hysterical stories about tax-dodging freelancers.

8 Responses to The Odd Job Society