The arguments about high executive pay rumble on. I have been reading around the subject, which is complex, and I will post something on it in due course. In the meantime, though, here is an interesting discussion I came across when looking at the causes of household income inequality.

Christine Schwartz of the University of Wisconsin—Madison reckons that some 25-30 percent of the increase in household inequality in the USA, over the 40 years between the mid 1960s and mid 2000s, can be accounted for by the association between spouses earnings. In other words, richer men marry richer women and poorer men marry poorer women. More households now have both partners working so the income disparity between households has been magnified.

In many ways, husbands and wives have become more equal over the past several decades. Husbands and wives increasingly share the same educational background, are more similar to one another with respect to their wages and hours worked, and share a more equal division of housework and child care (Cancian, Danziger, and Gottschalk 1993; Schwartz and Mare 2005; Bianchi, Robinson, and Milkie 2006). Increases in the resemblance of spouses, however, may have unanticipated consequences, namely, increasing inequality across families. As spouses become more economically similar, inequality among married couples may rise as marriages are increasingly likely to consist of two high- or two low-earning partners.

Or, as the OECD more bluntly puts it, these days, doctors marry doctors not nurses. This is, of course, because there are more female doctors now than there were 20 or 30 years ago. Indeed, some of those women who might once have become nurses are now qualifying as doctors. The same pattern is true in a number of professions. Women in their twenties are now likely to be earning as much as their male counterparts.

High earners are therefore increasingly marrying other high earners in a process known as Assortative Mating:

Shifts in the economic foundations of marriage and increasingly egalitarian gender norms may have changed men’s and women’s preferences for mates. As women’s labor force participation has grown, men may have begun to compete for high-earning women just as women have traditionally competed for high-earning men (England and Farkas 1986, p. 182; Oppenheimer 1994, pp. 332–34). Increasing symmetry in men’s and women’s preferences for mates implies greater resemblance between spouses’ earnings and greater inequality across couples as marriages increasingly consist of partners with similar earnings.

Empirical research supports the notion that mate selection has become more symmetric. A recent study of marriage patterns among two cohorts of women shows that high-wage women are more likely to marry men with high occupational status and high earnings potential than women with lower wages and that this association has increased over time (Sweeney and Cancian 2004). Information on men’s and women’s stated preferences for mates also supports this hypothesis. Using data collected at six time points between 1939 and 1996, Buss et al. (2001) show that the importance that men place on women’s financial prospects has increased and that, overall, men’s and women’s preferences for mates have become more alike.

Schwartz also notes that, whereas in the 1960s, the higher a husband’s income the less likely the wife was to work, in the 2000s, the wives of high earners are more likely to work and their participation in the workforce has increased at a higher rate:

So both the pay levels and the employment levels among women married to high earning men have increased, which amplifies the inequality between household incomes. 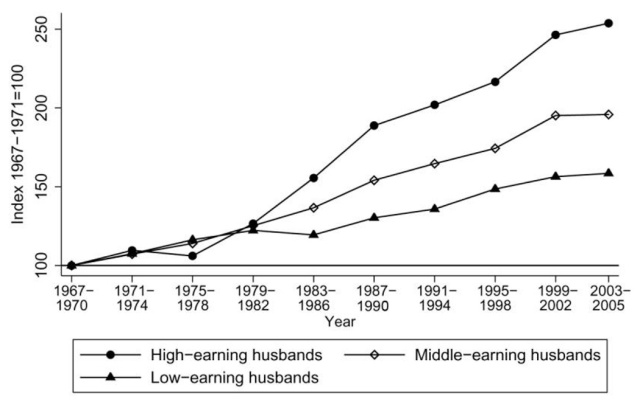 As this graph shows, the earnings of the wives of high-earning husbands increased the most, as more women went into jobs that paid as much, if not more, than those of their husbands.

Has something similar happened in other countries? The OECD says it has:

In couple households, the wives of top earners were those whose employment rates increased the most. There was also in all countries a rise in the phenomenon known as “assortative mating”, that is to say people with higher earnings having their spouses in the same earnings bracket – e.g. doctors marrying doctors rather than nurses. Today, 40% of couples where both partners work belong to the same or neighbouring earnings deciles compared with 33% some 20 years ago.

However, the OECD is less convinced about the overall contribution of assortative mating to inequality levels. Only 11 percent of the rise in household inequality over the past 20 years, it says, can be attributed to the greater concentration of wealthy dual-income couples.

Intuitively this sounds right. As the OECD says, labour market changes, rapidly rising top-level incomes and less distributive tax-benefit systems account for most of the increase in household inequality over the last two decades. A cohort of high-earning professional women entering the labour market and the tendency of wealthy professionals to marry each other only amplified levels of inequality caused by other factors.

People have always tended to marry within their own social groups. Class differences have thus been reinforced by the combined effects of parents’ education levels and social contacts. To that we can now add dual incomes that are pulling away from each other, especially at the upper end. As women start to maintain their earnings parity with men into their 30s, some children will find themselves with a rich dad and a rich mum. That will give them a very good start in life. The contribution of associative mating to household inequality may be relatively small at the moment but who knows what its effects across the next generations might be?

6 Responses to How far has gender equality increased class inequality?