Carillion: a one-off or a symptom of a wider malaise?

Last week’s House of Commons report on Carillion is damning. Frances has an excellent summary of it here but the key points are these.

In the words of the report, the company was borrowing without investing. Its debt increased but the value of its assets remained the same and, as its revenue declined, Carillion found it ever more difficult to service the debt. 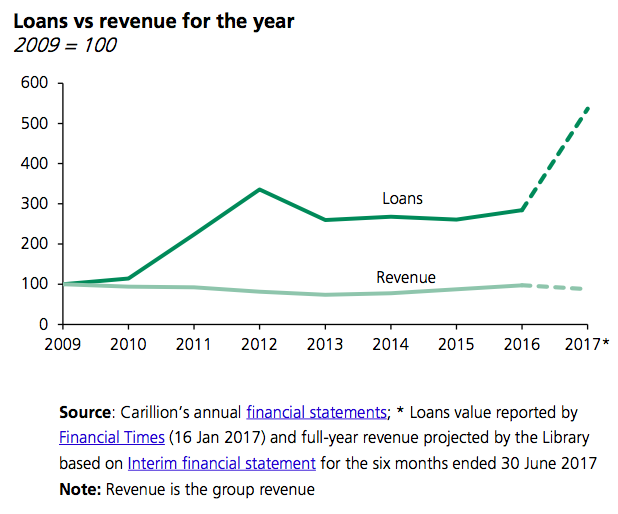 Carillion was also ‘aggressively accounting’, which is a way of making a corporate conjuring trick sound macho:

‘Aggressive accounting’ is the practice of declaring revenue and profits based on optimistic forecasts, before the money has actually been made. All is well if the forecasts are correct. But if costs rise and revenues fall (say, because of delays and defects), expected profits turn into actual losses.

If you then pay dividends on those expected profits but the profits don’t come in, you run up even more debt.

Over the eight years from December 2009 to January 2018, the total owed by Carillion in loans increased from £242 million to an estimated £1.3 billion – more than five times the value at the beginning of the decade.

When times were good, Carillion was paying as much in dividends as it could, when things went bad, it carried on paying dividends with money it didn’t have. 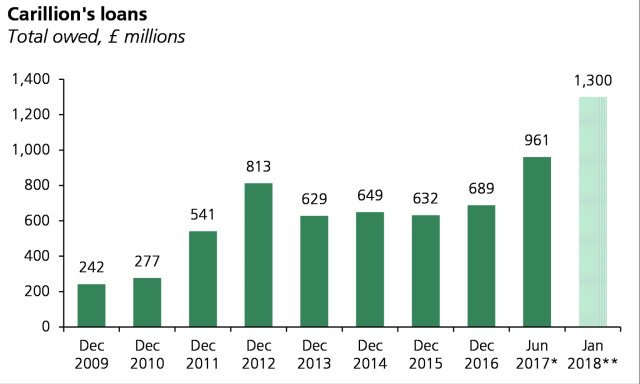 And when you’re in that sort of fix, all it takes is for two or three projects to fail and you’ve had it. Which is what happened in 2017. Its debt nearly doubled in 2 years and, by the time it collapsed, it held just £29 million in cash.

As it turns out, quite a lot of people saw this coming, or at least had enough of an inkling that something was wrong to start betting against the company. In April 2017, the FT reported that Carillion had been the most shorted UK stock for 18 months. As Frances says, the rot set in some time ago:

The researchers seem to have gone back through the reports & accounts to about 2009. And they conclude that Carillion was a basket case not just in the last year of its life, but from about 2011 onwards. I’ve now done the same exercise, and I agree with them. Carillion’s cupboards were virtually bare, and the little that was in them stank.

Yet, while all this was going on, Carillion was winning accolades for building public trust, ethical business practices and corporate governance. Its chairman was advising David Cameron on corporate social responsibility. As the FT’s Kate Burgess said, the Carillion board ticked all the good governance boxes:

On paper, the directors looked well qualified to steer the outsourcer. As chairman, Philip Green was a former chairman of United Utilities, the UK’s largest listed water company. Not only had he run a large contracting company, he was also a fully paid-up member of the great and good as a former adviser to then prime minister David Cameron on corporate responsibility.

The directors did not lack experience, sitting on boards from Royal Dutch Shell to Premier Farnell.

Alison Horner, head of the remuneration committee, was formerly operations director at Tesco and a non-executive director of Tesco Bank. The head of the audit committee was an accountant, as were three other directors.

In 2016, the directors approved a change to the conditions under which executive bonuses could be clawed back. As the Institute of Directors remarked, this is not a good look. The FT’s city editor Jonathan Ford managed to work the term ‘looting’ into his article while stopping short of any accusations that might get the paper sued:

Carillion’s board may not have looted, but it does seem to have practised what one might call “reckless abstraction”. It sucked out cash to placate stock market investors even as executives wrote the mountain of under-priced contracts that ultimately buried the business, triggering a £1.2bn writedown in the second half of last year.

In the five years to 2016, the directors recommended paying £357m of dividends to shareholders, despite generating just £159m of cash from operations. Over the same period, the bonuses for the two top executives climbed from nothing to more than £1m a year in 2016.

Inevitably, people are asking questions about corporate governance. It is 25 years since the Cadbury Review, set up after the collapse of BCCI and Polly Peck, led to the creation of the UK’s corporate governance framework. Since then, there have been numerous reports and the code has been amended every few years. Yet, every so often, someone trousers a large amount of money from a massively indebted company, leaving shareholders, employees, pensioners and creditors to take the hit. After a quarter of a century’s corporate governance reform, the scandalous company failures are still happening. Would the recent proposed reforms to the corporate governance code have saved Carillion? It’s difficult to say, writes corporate lawyer Sophie Brookes:

[W]hether the new corporate governance code would have prevented the collapse is unclear. Ultimately, the new requirements will only bite if shareholders and investors are prepared to step in and hold boards to account.

As ever, the system is only as good as the people operating it.

Perhaps it is unfair to expect the corporate governance framework to prevent the occasional corporate collapse. It could be that it is like the drains; most of the time it works well and we only notice when it fails somewhere and a foul stink erupts. It may be that most non-exec directors and active shareholders are doing a good job holding their executives to account and we would be worse off without them.

Or could it be that there are a lot more firms like Carillion which are only getting away with similar practices because no-one has twigged yet. As Kate Burgess says:

It is worrying to think the construction company’s board was such a model of good governance. If the line up had been different, would another cast of characters have done any better?

And how many other supposedly well-run boards are presiding over impending corporate disasters elsewhere?

There will, no doubt, be more of this to come over the next few weeks and months.

A peculiarly badly managed one-off, sunk by a perfect storm of unfortunate circumstances? Or a symptom of something deeply wrong with the way UK companies are governed?  Whatever happens, Carillion will probably provide the impetus for further corporate governance reform. Whether that will stop something similar happening in future is anyone’s guess.

23 Responses to Carillion: a one-off or a symptom of a wider malaise?