Have we fallen out of love with private sector contractors?

Is the collapse of Carillion a watershed moment? Robert Peston thinks so:

Carillion’s collapse marks the end of a 25-year love affair between Tory and New Labour governments on the one hand and private-sector service providers on the other.

Could this be the point at which political opinion turns against the private sector provision of public services? And, if so, is it simply catching up with where the voters have been for some time?

In the mid-1990s, I went to see Tony Blair speak at Brenford Fountain Leisure Centre. The first question from the floor was about renationalising the railways and utilities. Labour’s new leader dismissed the idea, essentially saying that it was never going to happen and that there were far more important things on which a new Labour government would need to focus its energy and resources.With that the conversation moved on.

And that was pretty much how things went for the next two decades. In his dismissal of denationalisation, Tony Blair was simply reflecting the prevailing political orthodoxy which arose during the Thatcher years. The government was to do less and the private sector was to do more. That was the way the world was going. Light-touch regulation and the privatisation of public services would be the order of the day whoever was in power.

Recent years, though, there seem to be signs that the voters are not altogether happy with this state of affairs. The Guardian’s Andy Beckett declared last summer that Britain had fallen out of love with the free market. Here he quotes IEA director Mark Littlewood:

Amid all the current political turmoil in Britain and the wider world, the shift against free markets has yet to register fully with much of the media or many voters. But the most ardent neoliberals have noticed. “Free marketeers have been gobsmacked,” says Mark Littlewood, director of the Institute of Economic Affairs, which has supplied British politicians with pro-capitalist arguments for 62 years. “Things we thought of as like the laws of gravity are now up for grabs.”

Equally gobsmacked was the Legatum Institute. “The capitalism ‘brand’ is in crisis,” it said after its joint research with Populus found significant support for stronger business regulation and the re-nationalisation of utilities and railway companies. Nor can this be dismissed as the idealism of young people who can’t remember how bad things were in the 1970s. These views are fairly evenly spread. (The full list is on pages 15-18 of the report.) 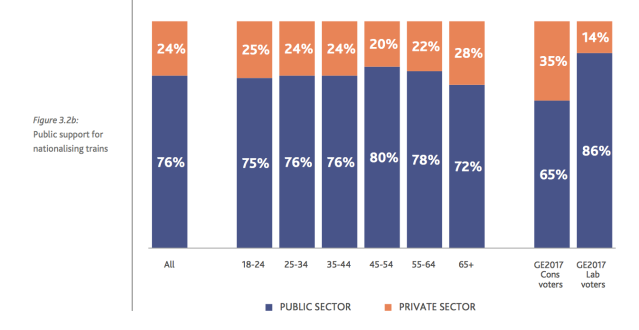 These views also cross the traditional left-right divide. A YouGov survey found that the proportion of UKIP voters supporting re-nationalisation was around 75 percent. There was even a narrow majority among Tory voters.

There is also evidence to suggest that voters have a negative view of big business. Research by the Edelman Trust and IpsosMORI reported low levels of trust in large corporations and the people who run them. However, this “unprecedented crisis of trust” seems to apply across western economies and to most institutions and authority figures. According to Edelman’s recent figures, business hasn’t fared much worse than anyone else. 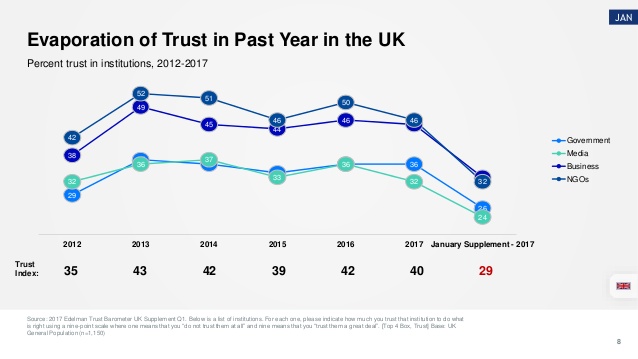 Ipsos MORI data records a sharp fall in the proportion of people who think company profits make things better for their customers but this decline goes back to the 1980s and has held fairly steady ever since.

YouGov data also shows the level of trust in people who run large companies to be consistently low (around 20-25 percent) since 2003. Contrast that with journalists whose reputation has collapsed over the past 15 years.

There are a couple of questions on the British Social Attitudes survey which go back to the 1980s and enable us to track broad anti-corporatist sentiments. (Thanks to Harry Carr at Sky News for these charts.) 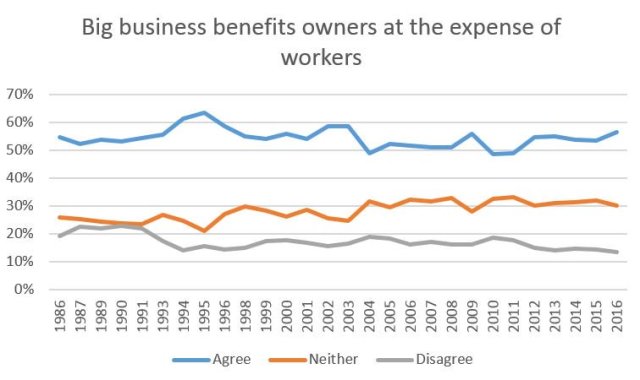 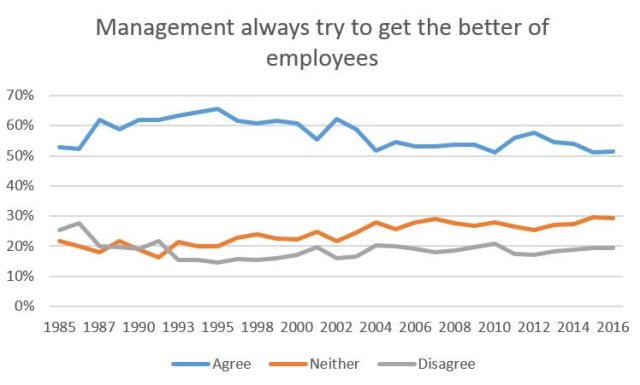 This suggests that a majority of people have a negative view of corporate behaviour and have done for some time. With some fluctuations, these numbers have held fairly steady since the 1980s.

The BSA also has some data on attitudes to nationalisation although, for some reason, it stopped asking the question in 2009.

This shows a balance of opinion in favour of state ownership but nowhere near as high as that found in the more recent surveys.

Which raises a broader question, is this a shift in public opinion about private sector public service provision or does it reflect a deeper and more long-term anti-corporate sentiment that has only recently found its political expression? Is the collapse of Carillion really a pivotal event or has it just come at a time when political opposition to privatisation was finding its voice? Was it the last straw it did it just confirm the beliefs of many voters that a lot of things shouldn’t have been privatised in the fist place?

Whatever happens next it is likely that governments will find a lot more public attention on the private provision of public services. Further privatisations will almost certainly meet stiff resistance, as the plans to privatise the Land Registry and Ordnance Survey already have. My guess is that this would probably have happened anyway regardless of whether or not Carilllion had crashed. Where I think Robert Peston is probably right is that private sector service provision has peaked. Whatever the rights and wrongs of privatisation, governments will be faced with a lot more public hostility to it than they have seen for the past few decades.

14 Responses to Have we fallen out of love with private sector contractors?