The Conservative manifesto has reiterated the party’s promise to cut net migration to below 100,000. That implies a reduction of over 60 percent and, although the manifesto doesn’t give a timeframe, even achieving the target by the next general election would be a colossal task.

So how will it be implemented? Who is going to deliver this massive reduction in immigration? Employers, of course.

There was much talk during the Brexit referendum about taking control of our borders and  Theresa May repeated the phrase at the manifesto launch. It is very unlikely, though, that the UK will introduce restrictions on the entry of EU citizens at the borders. Any constraints the UK places on travel from the EU are likely to be reciprocated. Therefore, if we require visas from EU citizens, then we will need visas to visit European countries. If we start interrogating Romanians and Bulgarians when they arrive at Gatwick about the purpose of their visit to the UK, we can expect the same treatment when we go on business to Frankfurt or on holiday to Greece. Brexit will do enough damage to UK trade as it is. Making it more difficult for people to travel around Europe would aggravate the problem.

Furthermore, it would clearly be absurd to require visas from the rest of Europe when we don’t ask for them from visitors from countries much further away. Why would we demand visas from Austrians and Belgians but not from Argentinians and Brazilians?

In all likelihood, after Brexit, travel from the EU will be like it is from any other non-visa country. People will turn up at ports, airports and stations, have their passports checked and be waved through. All that will be different is that the EU fast-track lane will probably disappear.

Much of the UK’s immigration control has nothing to do with borders. If someone arrives from a visa-free country they can stay for 6 months provided they can support themselves. It’s that last bit that’s important. Most are not rich enough to do that, so, effectively, we control immigration through access to the labour market. As Jonathan Portes explained to the House of Commons Exiting the European Union Committee:

As he said in a NIESR paper he wrote in November, talk of border controls is a red herring:

Immigration control (of EEA nationals) does not (mostly) mean border control. It does not seem likely that we would restrict EEA nationals’ right to enter the UK without a visa. A fully fledged visa regime for EEA nationals would be hugely disruptive to trade, travel and tourism – even leaving aside the obvious point that this would mean UK nationals would require visas to travel to continental Europe. And it would mean that they were treated worse than, for example, Americans or Australians, who do not need a visa to enter the UK.

The EU accounts for about half of all migration and the majority of migration for work. Any significant reduction in migration therefore means that it will have to become a lot harder, and a lot more expensive, to recruit people from the EU. The Conservatives are already proposing to double the levy on non-EU workers. Whether similar measures would be implemented for non-EU workers depends on what is agreed with the EU but for the government make its migration number it will have to make employers jump through a lot more hoops. A cap of 100,000 doesn’t leave much room for manoeuvre. Last year the UK admitted 60,000 workers and their dependents on intra-company transfers alone.

This is likely to be especially difficult for employers in London. Earlier this year, Demos looked at the combined risks from loss of labour supply and loss of trade after Brexit. Their report drew similar conclusions to the one published in Regional Studies earlier this year (see previous post for a discussion of the findings). London is at less risk from loss of exports than other parts of the country. It is, however, a lot more dependent on EU labour. 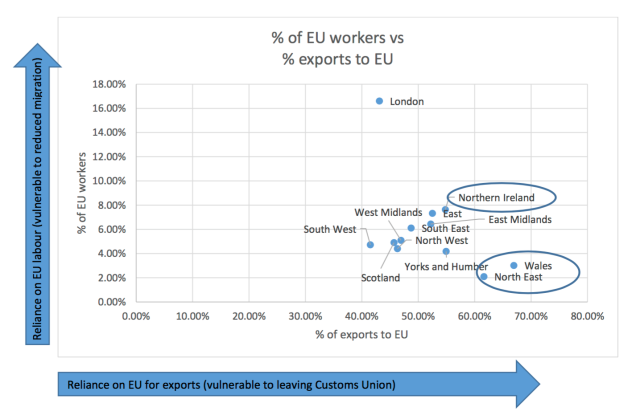 A cap in immigration is also likely to hit particular sectors very hard. Food manufacturing, hotels, restaurants, distribution and care homes are particularly vulnerable. An immigration cap of 100,000 would create not only a skill shortage but an overall labour shortage. There just wouldn’t be enough people to do all the jobs. The employment rate among the UK-born is already at a record high and even allowing for some underemployment, there isn’t much spare capacity there. As Torsten Bell says, the only significant pocket of unemployment is among the disabled. 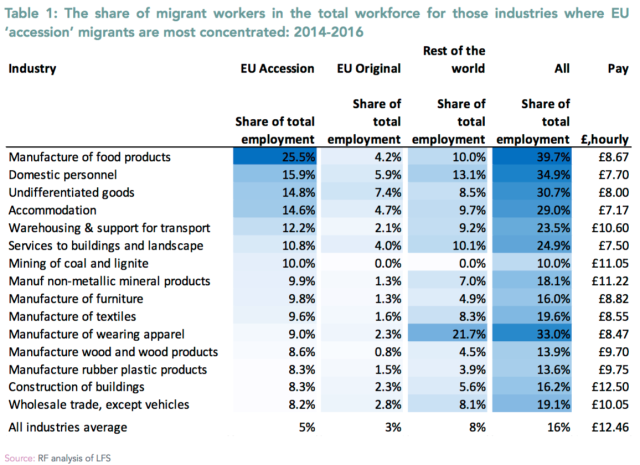 The burden of implementing the 100,000 net migration target, then, would fall on employers, in the form of additional migration-related cost and administrative workload but also in frantically re-organising workplaces and trying to work out how the hell to manage as the labour supply gets choked off. All of this will involve a significant amount of work and expense.

Will net migration ever really get down to 100,000? Who knows? Theresa May had the opportunity to quietly ditch the pledge at this election. The Conservatives are so far ahead in the polls that they could have dumped the policy without too much risk. George Osborne, in his new role as editor of the Evening Standard, described it as economically illiterate and claimed that no senior ministers support it. But Theresa May  is a woman on a mission, to change both the Conservative Party and the country. Might this be one of the things which she is determined to see through?

But even if the 100,000 figure is unachievable there will surely be pressure to significantly reduce migration over the next few years. Even a reduction by 100,000 would be difficult enough. It will be the job of employers to make that happen. UK immigration is controlled at the workplace, not at the borders. The rapid reduction in immigration will be implemented not by immigration officers but by HR departments. Cutting migration by more than half is a huge task but it will be employers who do most of the work.