The speech by Bank of England chief economist Andy Haldane last month was another valiant attempt to get to the bottom of the productivity puzzle. Why did productivity decline after the recession and why has that decline been particularly sharp in the UK?

While it might, he says, be convenient to blame a financial services sector for over inflating UK productivity before the recession and knocking the stuffing out of it afterwards, this is only part of the story:

Perhaps, then, something is going on at firm level. His analysis of the productivity of thousands of UK organisations shows that, while some firms in the UK are as productive as any in the world, this country has a long tail of low productivity businesses.

Might that simply be because some industries are less productive than others?

Up to a point, says Mr Haldane, but there are greater productivity differences between firms within the same industry than there are between sectors. Within each industry, a few firms are improving their productivity while others are being left behind.  Furthermore, that gap has been getting wider over the last decade or so. 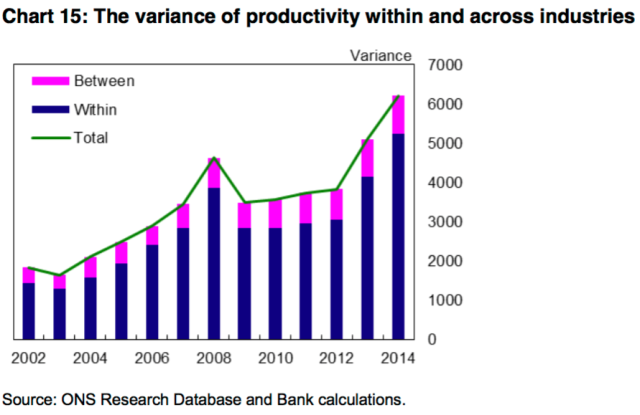 Furthermore, this difference between the most and least productive, known as productivity dispersion, is much greater in the UK than it is in many other countries. And again, that difference has widened over the last decade.

The paper then goes on to look at other factors, like ownership. Foreign owned firms have less of a long tail of low productivity firms than UK owned ones.

Every so often, some politician or journalist comes out with the Lazy British Workers hypothesis. But somehow, foreigners seem to get better productivity out of British workers than domestically owned firms do. Our car factories, for example, once a laughingstock, are now reckoned to be among the most productive in the world.

Size is also a factor. Among small firms, those with fewer than 50 employees, the long tail of low productivity is particularly pronounced.

John Van Reenen and the World Management Survey identified a similar distribution when they looked at management practices. (For more on this see previous post.)

Cross-country differences account for less than 10% of the diverging management scores: the biggest management differences occur across firms within the same country. The distribution of scores highlights the fact that much of what drags certain countries down is a persistent ‘tail’ of underperforming firms, those that score less than a two on our five point scale. While this tail is largely absent in the United States, it is evident in the UK and especially pronounced in developing countries such as Brazil and India.

Our research shows that large and persistent gaps in management quality remain across countries, mainly driven by the tail of underperforming firms. The UK clearly has a deficit in management quality, and this deficit is likely to be a key factor explaining the persistent productivity gap with other countries such as the United States and Germany.

Could at least some of the UK’s poor productivity be down to poor management? There is strong evidence to suggest so, says Mr Haldane.

But it is also quite likely, he says, that many firms don’t even know that their productivity is poor:

The policy question is how to effect those improvements. One idea which offers real potential comes from the Productivity Commission chaired by Sir Charlie Mayfield. This starts from the assumption that not only is there a long tail of companies, but that many are unaware of that fact. For the same reason most car-owners believe they are above-average drivers, most companies might well believe they have above-average levels of productivity.

In fact, we know most companies have below-average levels of productivity and a large fraction of them have seen no productivity improvement for several decades. The Mayfield Commission aims to create an app which enables companies to measure their productivity and benchmark themselves against other companies operating in similar sectors and regions.

By shining a light on companies’ relative performance, the aim is that this would serve as a catalyst for remedial action by company management. Indeed, the aim is to provide firms not only with a means of benchmarking themselves, but with tools to improve performance along identified areas. These online tools would be a mechanism for speeding-up the process of technological diffusion to the long tail.

At the risk of sounding cynical, though, I wonder how many firms care about productivity. Gross Value Add per worker is of interest to economists and ultimately determines how far living standards increase and how much tax revenue the country gets. But whether it is of interest to people running businesses is another matter. If you can make more profit simply by throwing more poorly paid people at something then why worry?

There is some evidence to suggest that this is what has been happening in recent years. The UK has experienced the opposite of creative destruction. High productivity firms have disappeared and low productivity ones have started up. As Albert Bravo–Biosca and Stian Westlake found, the allocative efficiency of the UK economy fell during to 2000s. The net effect of new firms coming into the market was to reduce productivity. A Bank of England paper covering a slightly later period, produced similar results. (For a discussion of both see previous post.) As Mike Haynes said, the UK is suffering from unproductive entrepreneurship, the hand car wash enjoying a revival while the more efficient machines stand idle.

At an ACAS event just over a year ago, Charlie Mayfield gave an example from his own sector of how cheap labour discourages productivity investment. In many French supermarkets the prices are updated with digital displays on the shelves. There is no point, he said, in doing this in the UK as it is cheaper to pay people to go round and update the prices. In France, however, with labour costs being much higher, the investment in the computerised system pays for itself.

Don’t get me wrong, I’m not knocking the initiative. Encouraging businesses to understand productivity and to measure things like value added per worker can only be a good thing. But measuring stuff and changing the way you manage people is hard. If you are making a reasonable profit, why bother? Sure, you might make a bit more if you could do the same with fewer people, or more with the same people but getting to that point requires a bit of thought and investment. If you can solve your problem by taking on a few more people it might take less effort.

Andy Haldane’s speech and the evidence he presented is further proof that some of the cause of Britain’s chronic productivity problem lies in workplaces and the way people are managed. Whether there is enough incentive to make enough bosses change their ways is another matter.

46 Responses to Productivity and bad bosses