Bad on top of bad

The self-employment NI increase grabbed most of the headlines last week, so the general state of the economy didn’t get much of a look in. It was very similar this time last year when all the headlines were about the sugar tax and no-one noticed that, as the FT’s Chris Giles put it, the OBR had forecast lower growth forevuuuh! The OBR had effectively called time on the recovery and said that our economy would bump along at 2 percent growth for the rest of the decade.

It is a sign of how far our expectations have fallen that last week’s budget was accompanied by headlines about improved GDP forecasts. It is true that the OBR’s outlook for this year is better than their forecast in November but that’s about it. They now expect growth to be well below 2 percent for the rest of the decade. In one year, the forecast has gone from mediocre to rubbish. This helpful chart by the Resolution Foundation shows the deterioration.

One rather remarkable comment from the OBR is that:

“Cumulative growth over the forecast as a whole is slightly weaker than in November, as we now believe the economy was running slightly above potential at the end of last year”

That’s an economy, recall, in which GDP per capita is still barely 2% above its 2008 level. That’s nine years to grow as much as it would normally grow in one. What the OBR is saying is that despite that truly dismal record all of the productivity – and with it earnings growth – we would normally expect has been lost forever. This remains the big story of the last decade – a decade without growth, a decade without precedent in the UK in modern times.

And on the outlook for pay he was almost lost for words:

Of course in all this what really matters to people is what is happening to their incomes. Income and earnings growth over the next few years still look like being weak. On current forecasts average earnings will be no higher in 2022 than they were in 2007. Fifteen years without a pay rise. I’m rather lost for superlatives. This is completely unprecedented.

Or, at least, unprecedented in modern times. As the Resolution Foundation noted, you have to go back to 1810 to find a time when average pay across a decade was lower than it was in the previous one.

The problem here is that Brexit has piled bad on top of bad.

As the Resolution Foundation’s Matt Whittaker showed in a report last month, while the recession was worse than any of the downturns we have seen since the Second World War, the recovery has been much weaker and slower. Usually we expect a bounce back after a crash but this time it hasn’t happened. In the past, smaller crashes followed by bigger booms meant that we pretty much made up for lost ground. This time we’ve had a big crash followed by a much smaller recovery, leaving a hole in our economy.

To compensate for a crash like this we would have needed much stronger GDP growth.

So the catch-up didn’t happen. 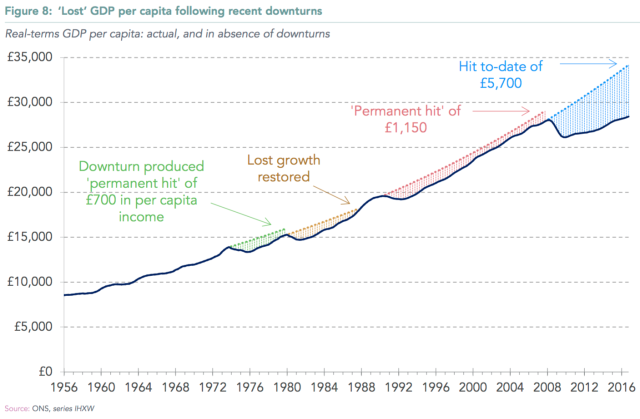 Still, this time last year things were beginning to look up. Per capita GDP was, at last, back to its pre-recession level and wages were rising again. We even thought that average earnings might get back to their pre-recession levels by the end of the decade. Now that looks hopelessly optimistic.

It could be worse still. Earlier this year, the EY Item Club produced a report based on the assumption that the UK would leave the EU without a trade deal, a scenario that is looking ever more likely by the day. It forecast growth of 1.3 percent, 1 percent and 1.4 percent for the next three years, making the OBR figures look rosy in comparison.

Whatever happens, leaving the EU will slow the recovery down. We don’t know by how much and for how long, only that it will. You can’t change the assumptions on which businesses have been built for the past forty years without damaging the economy. Just as we were beginning to claw our way out of the stinking pit that was the Great Recession, we have decided to embark on an economic experiment that will impede our escape and might even drag us down again. To quote Ozzy Osborne, ‘Crazy, but that’s how it goes!’

8 Responses to Bad on top of bad