Even after Brexit, the Singapore of Europe will remain a fantasy

Singapore is like a porn star for the free-market right. They project all sorts of lurid fantasies onto it and get very excited. Every so often, an article appears breathlessly proclaiming the virtues of the island state and its rapid GDP growth. If only the stodgy old UK were a bit more like deregulated Singapore, we could have a bit of that too. You could make similar arguments for Luxembourg, another filthy rich state which has experienced relatively high per capita GDP growth, but no-one ever seems to suggest that joining the Euro and adopting Luxembourg’s stricter labour laws would be the answer to our economic woes.

That’s because it wouldn’t, of course, but neither would trying to become Europe’s Singapore. Both countries are small city states with large financial services sectors and without the inconvenience of a wider hinterland. When PwC looked at the economies of various major cities, Singapore’s per capita GDP was below that of London and New York. Cities with large financial centres tend to be rich but you can’t build an entire country on the same basis.

Many of those who think the UK should be more like Singapore might be in for a shock if it really happened, for their fantasy star has another side. Forget the Nanny State, Singapore is more like Victorian Governess State. You do as you are damn well told or you get a good thrashing. Most housing is state-owned, either rented or on long leases, and when the Singapore government decided it wanted to integrate its multi-ethnic population it simply introduced quotas. It was a policy of forced integration. Different ethnic groups would live alongside each other whether they liked it or not. As the country’s long-serving prime minister Lee Kuan Yew said:

Imagine the uproar if we did something like that here.

All this would have been just an amusing debate if it were not for the suggestion by the government that it might make the UK some kind of low tax, low regulation haven after Brexit. There are lost of good reasons why this Singapore Threat is unlikely to come to much but, as John Major said earlier this week, the most important one is that the voters wouldn’t stand for it:

Such a direction of policy, once understood by the public, would never command support. It would make all previous rows over social policy seem a minor distraction.

Since the recession, Britain has struggled to raise enough tax revenue to plug its deficit. The main reason George Osborne fell short of his target was not because the cuts to public service spending didn’t happen (they did, and more) but because revenues constantly fell short. An ageing population is increasing the pressure on public spending. Even if the government achieves further reductions in public spending there will be little room for any significant tax cuts. There just isn’t the scope to attract business to the UK through low taxes. To do so would, as Sir John says, require a complete dismantling of welfare and public service provision. Even George Osborne was never really up for that kind of state shrinkage, for the simple reason that the public wouldn’t wear it. The small state rhetoric pumped out over the last few decades by newspapers, MPs and think tanks has had remarkably little effect. Those favouring tax and spending cuts have always been a small though noisy minority. 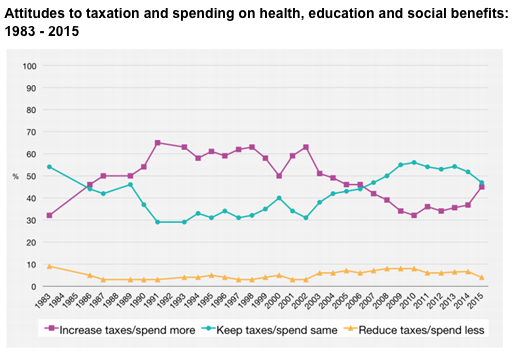 It’s a similar story with regulation. Despite the UK’s EU membership, it is one of the least regulated countries in the developed world. There is no evidence to suggest that reducing regulation even further would have any effect on the country’s economic performance. It might even make things worse. There is no clamour from employers to scrap employment laws which are, by and large, popular with the public. The second biggest item on the Leave campaign’s list of savings from regulation was the internationally agreed Basel III rules forcing banks to hold more capital. This is the most effective bulwark against another banking crisis. Abolishing that is unlikely to go down well with the public.

Theresa May understands this, even if some in her party don’t. She has hinted at more business regulation, on high executive pay, on the gender pay gap and at one point even talked about putting employees on boards. She knows she won’t win the votes of the just about managing with talk of deregulation.

John Major is right. There are some who see Brexit as an opportunity to turn the UK into something like a Singapore of Europe, a low-tax low business regulation state. But this is a fantasy that is unlikely to be shared by most of the electorate. If there is one good thing to come out of Brexit it is the revival of the idea that, if enough people vote for something, they can make it happen, despite what pundits, politicians and the plutocrats of Davos say.  After we leave the EU, some will, no doubt, push for radical tax cuts and deregulation. They probably won’t get very far. They will find their efforts frustrated by the Will of the People.

23 Responses to Even after Brexit, the Singapore of Europe will remain a fantasy