Setting fire to the safety net

Is inequality getting worse, better or staying pretty much the same? It’s one of those questions that comes up over and over again.

Jeremy Corbyn couldn’t have picked a worse time to claim that inequality is getting worse, just before an ONS report appeared which showed that it was at a 30 year low.

As ever, though, it’s a bit more complicated than that. If you look purely at hourly pay, the rates people are paid for the work they do, then Jeremy Corbyn is right. The UK is the most unequal country in the EU and more unequal than it was a decade ago. The European Foundation for the Improvement of Living and Working Conditions (Eurofound) commented:

The UK is remarkable for its polarisation: it accounts for a very significant portion (nearly half) of the top 1% of wage earners in the EU, and yet it also has a substantial presence in the bottom two quintiles.

But incomes are affected by factors other than hourly rates. This horrid but useful chart from the Eurofound report shows how, once you compare annual incomes and household incomes after tax, the UK falls to somewhere near the average in comparison to other EU countries. 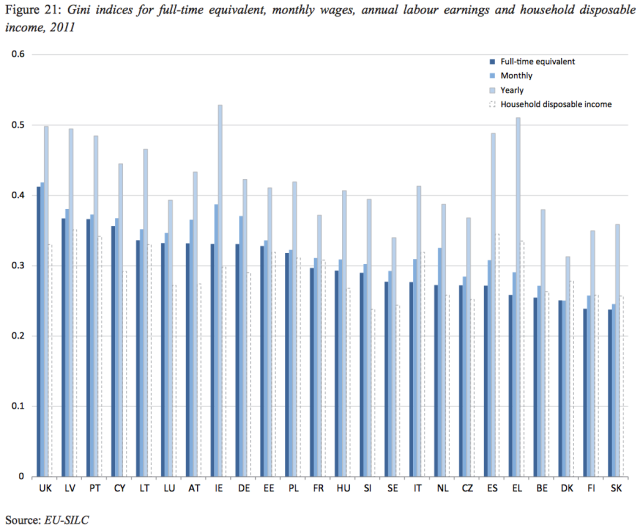 There are two reasons for this. Firstly, with the 3rd highest employment rate in the EU, the UK distributes its employment more evenly than some other countries. A smaller proportion of households suffer from unemployment and long-term poverty. Secondly, the UK’s tax and benefits system is highly redistributive.

As this chart from a recent report by the IFS shows, the difference between the male hourly wage at the 90th and 10th percentiles of the income distribution has risen while that for household incomes after tax has fallen. 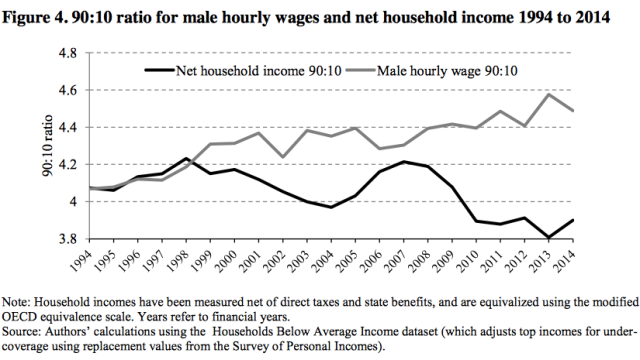 Different aspects of inequality can rise and fall at the same time.

As this chart from the IFS report shows, the tax and benefit system prevented a huge rise in inequality among working households over the past 2o years. (Post-tax income here includes the effects of taxes and benefits.)

Pay rose much faster for those on higher incomes but redistribution through taxes and benefits evened out the rise in household incomes until it was almost uniform.

Over the same period, as the Resolution Foundation showed, the proportion of people receiving out-of-work benefits fell and the employment rates of those in the lowest income deciles increased. 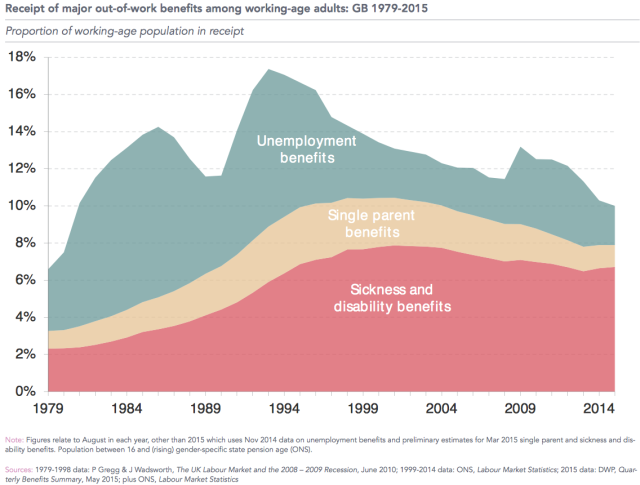 It would be churlish not to acknowledge this as a tremendous achievement. Holding household income inequality steady at the same time as pay inequality was rising demonstrates the effectiveness the government’s tax, benefits and employment policies. A deindustrialising country with huge international financial centre in its bottom right hand corner was always going to be at risk of rocketing income disparity. What could have been a rapid and divisive rise in inequality was tempered by government policy. It’s unfashionable to say anything nice about him these days but Horrid Tony Blair must take at least some of the credit for this. As Polly Toynbee often said, he was more Labour than he liked to admit.

Looked at another way, though, this simply means that, as Chris Dillow says, we have grown used to a much higher level of inequality than we had in the 1980s. Cheering about it having fallen a little misses the point:

Even if inequality is now falling, the damage done by the previous rise in it still lingers. To paraphrase Joseph Schumpeter, if a man has been hit by a lorry you don’t restore him to health by reversing the lorry.

Furthermore, all that is standing between us and severe inequality is our finely balanced tax and benefits system. Start cutting in-work benefits, as the government is planning to do, while the wage squeeze continues, as it probably will, and the level of inequality is likely to rise sharply.

In its recent report on living standards, over the rest of this decade the Resolution Foundation forecasts a jump in inequality similar to that of the 1980s. 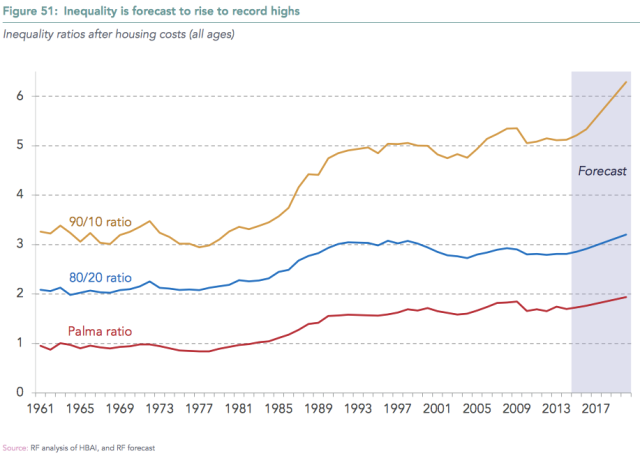 Ken Clarke remarked last week that politicians have no idea how to tackle inequality:

I think everybody who believes in liberal economic policies – which is the great bulk of politicians of the last few years – have never quite solved the problem of how to distribute the benefits better so that the whole country can be seen to benefit. We’ve been trying for years.

Might it be a good idea to come up with some new ideas before removing the safety net that, for all its faults, has kept inequality at bay for the past quarter century?

7 Responses to Setting fire to the safety net