The Employment Tribunal judgment on the Uber case is one of the most amusing I have read. The tribunal ruled that Uber’s drivers are not running their own businesses, as the company claimed, but are workers and therefore entitled to the minimum wage, sick pay and holiday pay. Contrary to some reports it did not rule that they are employees.

Darren Newman explains the case here. Both he and Michael O’Connor also eloquently dispose of the rather silly suggestion that working for Uber is no different from renting a room on Airbnb or selling stuff on ebay.

The tribunal was scathing about Uber’s attempts to portray itself merely as a facilitator of thousands of small businesses.

Any organisation … resorting in its documentation to fictions, twisted language and even brand new terminology, merits, we think, a degree of scepticism. Reflecting on the Respondents’ case, and on the grimly loyal evidence of Ms Bertram in particular, we cannot help being reminded of Queen Gertrude’s most celebrated line: ‘The lady doth protest too much, methinks’.

The notion that Uber in London is a mosaic of 30,000 small businesses linked by a common ‘platform’ is to our minds faintly ridiculous.

The crux of the case was about how much control the drivers really have over their own work. The tribunal found that the company has a high degree of control and that, far from being operators of their own businesses, the drivers are essentially dancing to Uber’s tune.

The relevant paragraph from the judgment is here: 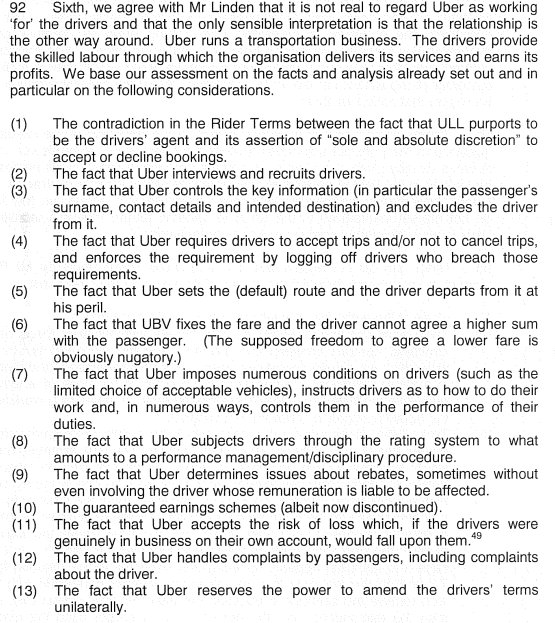 Uber drivers are recruited like employees, told what sort of car to drive, don’t know the names of their customers, don’t set their own fares and don’t see the customers’ money. They are paid by Uber and they even have a performance management system.

As Darren says, the tribunal’s response to Uber’s assertion that the drivers are running their own businesses amounted to “Oh come off it!”

A couple of weeks ago, Sarah O’Connor wrote about the echoes of the past in the gig economy:

We forget history. Go back to the 18th century and you would find a place like London was one big gig economy. Few people had jobs as we know them now; most were hired intermittently and were paid by the “piece” or task. There was an eclectic mix of payment arrangements depending on the nature of the work. The carpenters who maintained the timber starlings on London Bridge were paid per tide, according to Judy Stephenson, an economic historian.

She might also have mentioned the practice of putting out work where manufacturers would subcontract parts of a process to people in domestic workshops for piece rates.

Manufacturers replaced putting out with the factory system to control and standardise processes thereby ensuring quality control and driving down costs. The only problem was that when workers were together they tended to do awkward things like take collective action and demand employment rights, a process which eventually saw most piecework being replaced with regular wages . The factory system can therefore be said to have created employment in the way that we now understand the term, complete with its legal obligations.

New technology, though, enables companies to control their processes without their workers being in the same place. You can therefore combine factory discipline with the piece rates and reduced obligations of the putting out system. An army of people doing pretty much as you tell them but taking on much more of the risk themselves.

Of course, not only does this put more risk onto the worker, there is also a risk for the taxpayer. The low pay, lack of employer’s NI, missing pension contributions and poor benefits that characterise self-employment will eventually rebound on the general public. As in the eighteenth century, the burden of social protection and welfare provision falls on the parish.

Technology means an employer can combine a 21st century control of its processes with a 18th century lack of obligation. Last week, a tribunal dismissed this attempt by a company to have its cake and eat it as “absurd”, “faintly ridiculous” and “pure fiction”. Whether or not it stays that way has far-reaching implications for the nature of work and employment. As Torsten Bell said, technology has moved on and, as so often before, the law needs to catch up.

6 Responses to Uber: control without obligation