There was a new twist on the Brexit and immigration question last week. The Leave campaign came up with the Save British Curry slogan. Priti Patel blamed the EU for the tougher restrictions on non-EU workers. This, she claimed, was preventing restauranteurs from bringing workers over from the Indian subcontinent.  Of course, as an employment minister she well knows that the EU has nothing to do with these restrictions but the point she was trying to make (I think) was that tougher rules on immigration from outside the EU have been brought in because of the easier access for EU workers. A government under pressure to reduce immigration had to balance looser restrictions on EU migration with tighter restrictions for everyone else. If we were to leave the EU, so the logic goes, the tougher restrictions on workers from India would not be necessary.*

This sentiment was echoed during Channel 4’s EU referendum debate, which drew its audience from ethnic minorities. Most of the pro Brexit members of the audience gave immigration as their main reason for wanting to leave the EU. Not all of them wanted to reduce immigration, though. Many were opposed to free movement of people from the EU because they felt it had made it more difficult for those from elsewhere in the world to come to the UK. A number of people argued that the increase in immigration restrictions was an indirect result of EU membership because the increase in migration from Europe had led to pressure on the government to curb it elsewhere. But, rather than wanting to restrict immigration, some of the Brexiters wanted to level down the barriers and make it as easy for people from elsewhere to come to the UK as it is for those from the EU. Trevor Phillips remarked that it was the first time he had heard an open borders argument from the Brexit side.

This all sounds a bit confusing but there might be a grain of truth in it. It is certainly true that the number of immigrants from elsewhere in the world began to fall at around the same time that the eastern European countries joined the EU.

This may well be due to the relative ease of employing people from the EU compared to those from elsewhere. As Migration Observatory noted, the number of non-EU people coming to the UK to work fell sharply from the middle of the last decade. It could be that EU migrants met some of the extra demand for labour which might otherwise have been met by people from Commonwealth countries.

What difference leaving the EU would make to this is difficult to say. Some people think that, if we applied strict immigration criteria to all countries, the resulting labour shortage it would force businesses to invest more in training and technology, thereby employing more British people and raising productivity.

But, as Jonathan Portes says, even if this were achievable, which is by no means certain, it would take some time and, in the meantime, businesses would kick up a fuss:

[W]ould we really ban unskilled migration for economic reasons entirely? At least in theory, it is possible to make a plausible economic rationale for doing so; while this would cut growth in the short term, it might over time incentivise firms into productivity-enhancing investment or training.

But these effects are lengthy and uncertain (and not obvious in previous periods of low migration). Meanwhile, business would suffer and would be vocal in saying so. And the incentives for irregular migration would increase significantly.

Governments have limited capacities to exclude, identify and remove immigrants, and when limited legal entry routes come up against labour market demand on the one hand, and supply of migrant workers on the other, the result is usually irregular migration. Would replacing EU free movers with European irregular migrants represent an improvement? Irregular migrants are more readily exploited, which makes it easier for unscrupulous employers to undercut local wages, and they do not contribute to income tax receipts.

Thus there is a huge gap between the simplistic claims of the Leave campaign, and the complex reality of governing the world’s fifth largest economy, further inconvenienced by the rule of law. In the event of Brexit, the government would come under tremendous pressure from employers and businesses to either admit those (now controllable) European nurses, lawyers, and students as immigrants, or else replace them with people from elsewhere.

Research by Migration Observatory for the Financial Times found that 75 percent of EU citizens working in the UK would not meet the visa requirements applied to non-EU workers.  Even if the EU workers already here were allowed to stay, the restrictions would soon lead to a labour shortage.

Employers who have been used to having a plentiful supply of well qualified labour on tap and who have been running down their training investment for some time, would be unlikely to change their policies overnight. There is also evidence to suggest that some firms’ entire business model is based on the availability of relatively cheap on-demand labour. Businesses would not want to see this supply of labour cut off and would soon put pressure on the government to ease immigration restrictions.

If the UK were to stay in the EEA after Brexit, the rules on free movement would be more or less the same. For many Leave voters, this would defeat the whole object of leaving the EU. Immigration is still the most important issue among people stating their intention to vote Leave. If the Brexit settlement didn’t include the free movement rules, the most likely immigration policy would be a standard set of work-related criteria for a wider group of countries. To avoid a sudden labour shortage, these criteria would have to be much less stringent than they are now. This would probably shift the balance of migration back towards non-EU citizens. There would still be lots of migrants from Europe simply because it is closer but the mix of immigration would probably tilt back towards those from the Indian subcontinent who make up the majority of non-EU migrants and who made up the majority of all migrants before the A8 accession in 2004.

With the exception of Japan, immigration is a significant factor in the labour markets of all developed economies, whether inside or ousted the EU. As this OECD chart shows, relative to the size of our population, immigration to the UK in 2013 was considerably lower than in some other advanced economies. 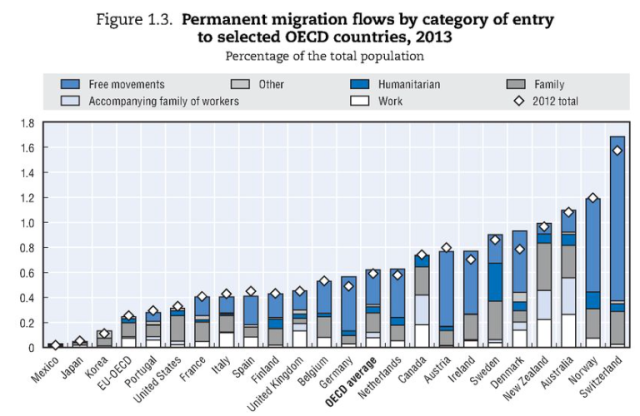 It is therefore reasonable to assume that an economy such as Britain’s will require a certain level of immigration regardless of how well we train our people of how much we invest to improve productivity.

In the event of Britain leaving the EU, the Brexiters at the Channel 4 debate might therefore get what they want. Tighter restrictions on EU migration probably would lead to looser restrictions on migration from elsewhere. In this scenario, it is likely that the overall number of immigrants wouldn’t change by much, it’s just that the mix would be different. Fewer people from Poland and more from Pakistan. Somehow, though, I don’t think that’s what most of the immigration focused Brexit voters have in mind.

*Update 1: This might not solve the curry crisis. As this FT article says, the problems faced by Britain’s Indian restaurants are more complex and long-term than just a shortage of staff.

Update 2: A NIESR paper published earlier this month concluded that a sudden tightening of immigration restrictions could have a significant negative impact on per capita GDP and on public finances. People might be willing to pay higher taxes in return for lower immigration but I wouldn’t want to bet on it.

7 Responses to After Brexit: Fewer immigrants or just different immigrants?