Are we prepared for a low growth world?

Duncan Weldon declared himself a productivity pessimist earlier this week:

Productivity – the amount of output produced for each hour worked – rose at a fairly steady annual rate of about 2.2% in the UK for decades before the recession. Since the crisis though, that annual growth rate has collapsed to under 0.5%. The OBR has decided to revise down its future assumption on productivity from that pre-crisis 2.2% to a lower 2%. That small revision was enough to give the chancellor a large fiscal headache in his latest budget, but it still assumes a big rebound in productivity growth from its current level. What if that rebound doesn’t come?

It’s still perfectly possible to argue that productivity pessimism is overdone, that we are still suffering the lingering after-effects of the financial crisis that will eventually end. But with each passing year that becomes more difficult. A good strategy is to hope for the best but prepare for the worst. And the worst is pretty bad.

Why is it so bad?

Productivity is one of two key factors determining the trend growth rate of an economy; the speed limit at which a country can expand without pushing up prices. The other is population. Falling birth rates across the advanced economies created a demographic “sweet spot” that lasted from the late 70s until fairly recently. Fewer children meant a rising share of the population was of working age. But fewer children in the past means fewer workers today and rising longevity means a rising share of the population who are retired. Across the west, the amount of workers for each retired person is heading in the wrong direction. Increasing the retirement age and more immigration are both theoretical fixes, but the scale of both required to fundamentally change the picture is almost certainly politically impossible.

That demographic sweet spot, a rising working age population and fewer dependents, was one of the factors that caused the spurt of growth after the Second World War. Historians and economists will be debating the causes of the postwar economic boom for years to come but, when compared to previous fifty-year periods,  the last half of the twentieth century saw unusually high GDP growth. It is starting to look as though we have seen the last of it.

Duncan produced this graph a few weeks ago, form the Bank of England’s Three centuries of macroeconomic data. He notes that, although it is early days, the early 21st century is looking more like the late 19th than the late 20th. 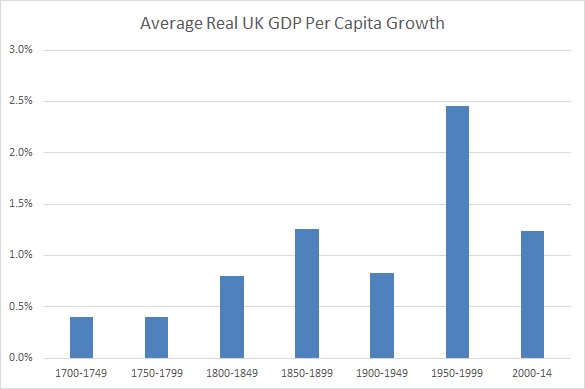 [T]he long history of growth looks rather different than the short. Secularly rising living standards have become the social and economic norm. No-one can recall a time when the growth escalator has moved anything other than upwards.

Yet viewed through a long lens telescope, ‘twas not ever thus. Chart 2 plots estimates of global GDP per capita back to 1000 BC. This suggests a very different growth story. For three millennia prior to the Industrial Revolution, growth per head averaged only 0.01% per year. Global living standards were essentially flat. Since 1750, it has taken around 50 years for living standards to double. Prior to 1750, it would have taken 6000 years.

It wasn’t until the start of the 19th century that most people’s living standards began to improve. It is, as Andy Haldane said, as though someone flicked a switch somewhere around 1750 and the technological take-off then fed through into a massive jump in per capita GDP.

Per capita GDP increased gradually during the 19th and early 20th centuries but steepest rise came after the Second World War. The period between the end of the war and the crash of 2007 saw unprecedented economic growth.

And, to illustrate Duncan’s point, productivity followed a similar pattern.

If, over the next decade, we are to achieve the same increase in per capita GDP that we saw in the last half of the 20th century, the economy would have to grow by between 3 and 3.5 percent every year. Even the most optimistic forecasts are nowhere near that. As Duncan says, even the government’s revised projections might be a bit optimistic.

In the UK, policymakers once thought trend growth was 2.75% and have now cut that to 2.2%. Without a productivity bounce that could fall to closer to 1-1.5% in the coming years.

It might be early days but the chances are that Duncan’s bar chart won’t look that much different in 2025. Unless there is a sudden productivity spurt, which looks very unlikely at the moment, real per capita GDP growth will probably average something like 1.3 percent for the 25-year period.

It looks like this productivity slow down will be set in for some time. The recent improvement which might have indicated that we had turned a corner came to a halt at the end of last year. That most other western economies are also seeing something similar suggests that the causes run deep, although the UK seems to have particularly severe symptoms. The IMF has urged governments to invest to prevent a slide into what Christine Lagard called the “new mediocrity” but, even if governments rise to this challenge, they may find themselves trying to jump-start a dead battery. We have no idea what the multiplier effect of such a stimulus would be. It might be disappointingly small. What level of investment it would take to return the UK to 3 percent growth is anybody’s guess but it is likely to be a very big number.

This gives us a huge problem. Most of us grew up and formed our opinions and expectations during that extraordinary post-war period. We thought that the growth we enjoyed during that lucky half-century was normal. We assumed that living standards would improve and that each generation would always be better off than the last one. Furthermore, we built a state based on the assumptions of late 20th century growth.

The trouble is, the pressure on state spending will almost certainly increase. The ageing population will cost more even if we all work longer and stay healthier. We have no idea what the effect of climate change will be but it is likely to put extra demands on local authority budgets.

This is bad news both for anti-austerians and for state-shrinkers. Governments will have their work cut out just to keep public services running at their current level. The brutal arithmetic of public spending means that even a real-terms freeze means significant service cuts.  A return to 2010 levels of staffing and provision looks unlikely unless people suddenly develop an appetite for much higher taxation. For the same reason, significant tax cuts also look improbable. Governments will be scratching around for every penny they can get.

A lower-growth world means that we will have to adjust the assumptions that we built up in the higher growth world. We will find our views about work, pay, living standards, property ownership, health and retirement challenged but none more so than our assumptions about what the state is there for and what it can and should provide.

1. Apologies for the strange disappearance of this post last week. I was away, tried to update it using my phone and lost the post. I really shouldn’t use a touch screen for anything complicated or fiddly.

2. I have changed the scale on the 4th chart to a log scale showing the rate of change. HT to Mark.

3. Interesting piece by Toby Nangle at FT Alphaville on why demographic changes might end the productivity slump.

[W]orkers in countries that allow child labour, have looser environmental regulations, and don’t care about safety, are cheaper than workers elsewhere, even after accounting for the worse infrastructure and lower skill levels.

[M]anufacturing wages having risen nine-fold in China since 2000 and the IMF estimates the country will soon switch, if it hasn’t already, from labour abundance to labour shortages as the working-age population shrinks and the rural-to-urban migration draws to a close.

Combine this with the impending retirement of the baby-boom generation in rich countries and the scene appears to be set for the return of some structural labour bargaining power and upward wage pressures.

4. Three theories on why productivity is so weak, by Neil Irwin in the New York Times. “The possible answers range from utterly depressing to downright optimistic.”

11 Responses to Are we prepared for a low growth world?