Graduates and the finishing school effect

“Kiss that graduate pay rise goodbye,” says the Times’s financial editor Patrick Hosking. He was commenting on a recent Bank of England report on the composition of the UK workforce which noted that, while the proportion of graduates has gone up over the last two decades, their pay premium has gone down. 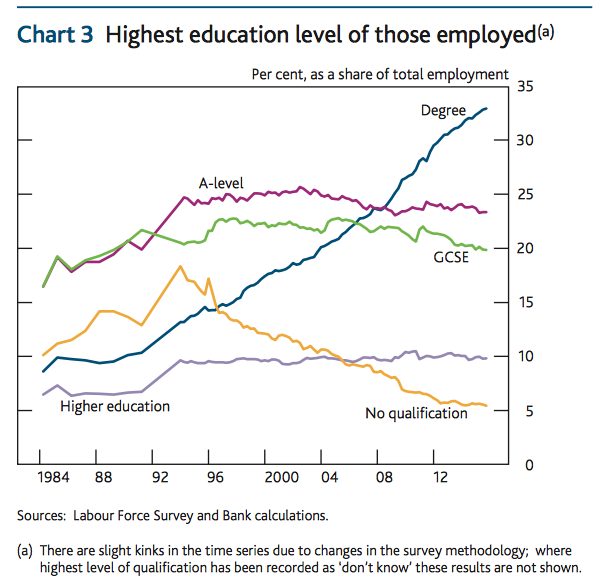 There are a number of possible explanations which would be consistent with this finding. For example, if demand for highly skilled workers has not kept pace with an increase in supply, an increasing number of graduates would also lead to a decrease in the wage premium for those with degrees. Alternatively it is possible that the large increase in individuals studying for a degree in the United Kingdom has led to a fall in its signalling value (the ability of degrees to correctly identify more talented individuals) and thus the amount of pay which those with degrees can command.

There is something in both of these explanations. As the number of graduates has risen, a lot more of them have gone into occupations that, at one time, we would not have described as graduate jobs. CIPD research published last summer found that the percentage of graduates had increased in all occupational groups since the early 1990s.

We would expect the graduate share of professional and managerial jobs to increase but their colonisation of the administrative, skilled and personal service occupations is perhaps more surprising.

At a Resolution Foundation event last year, Andrea Salvatori presented some findings from his work on job polarisation. He found that here are more graduates doing middle skill jobs now than there were 30 years ago while “non-graduates have also seen a major shift in the distribution of their employment from middling to bottom occupations.” Not only are there fewer mid-level jobs but a lot of those that used to be done by non-graduates are now filled by people with degrees. 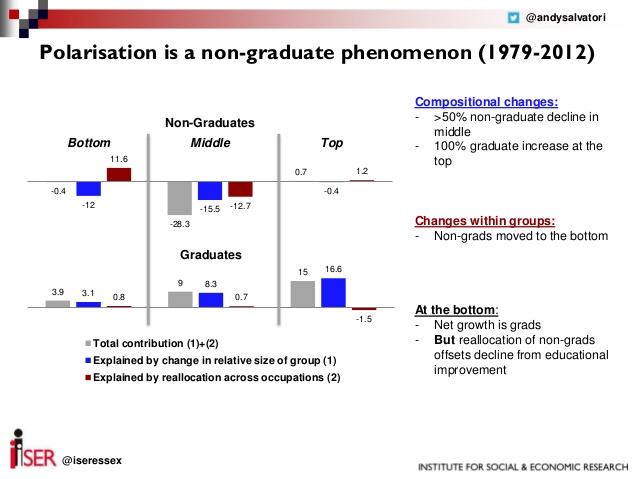 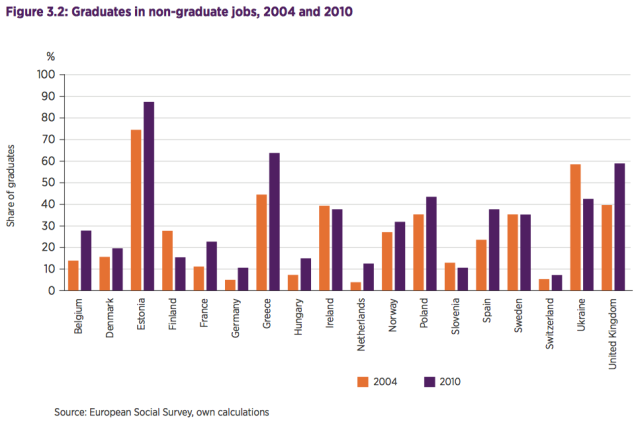 Does this mean that the UK has produced too many graduates? Perhaps, although there are other good reasons for getting degree aside from landing a higher paying job. I wonder, though, whether some of this is due to the number of graduates from elsewhere in the EU coming to the UK and doing non-graduate jobs.

Some of this is due to the difference in pay levels. Graduates can earn more in the UK doing a middle skill job than they can get at home doing a graduate job. But there is also something going on that I call the finishing school effect.

My data for this is largely anecdotal but bear with me. A number of European graduates I have spoken to recently explained that having worked in London means they get better jobs when they return home. One even told me that employers are now looking askance at people who haven’t left the country for a stint abroad. Graduates will, she told me, take any job in London. They are not bothered whether it is a graduate level job and, for the most part, neither are their employers. If you take a job on reception, in finance support or course administration for a big firm it might lead to bigger things but, even if it doesn’t, the mere fact of having worked in the City, West End or Canary Wharf adds cache to your CV.

McKinsey’s recent globalisation report concluded that the world only has eight truly global cities. Only one of them is in Europe and that city is London. It’s no surprise that young people are drawn to it from elsewhere in Europe.

A UCL CReAM report found that the UK has become a magnet for well educated EU migrants.

Even more remarkable is the immigrant population’s educational achievement, which has been consistently higher than that of the native population since 1995, with an increasing gap ever since. Whereas in 1995, about 13% of the UK born and 14% of the EEA immigrant population (excluding those still in full-time education) held a university degree, such was the case for 15% of the non-EEA population. By 2011, the percentage of natives with a degree had nearly doubled, to 24%, while the percentage of EEA and non-EEA immigrants had increased even further, to 35% and 41% respectively.

So the proportion of migrants with degrees is higher than that of the UK born population. As the CIPD found, in a 2014 study, a lot of those EU graduates are working in low- to middle-skill jobs. 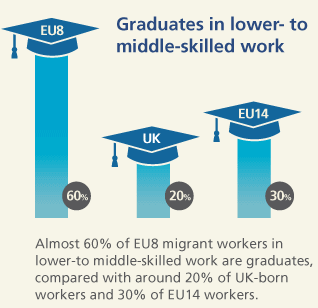 The report also found that EU migrants are concentrated in mid-twenties to early thirties age band. In other words, most come to the UK when they already have some work experience. A job in London can then be a stepping stone to a future career here or a gold star on the CV making a graduate more marketable back home or anywhere else.

OK, my data for this is anecdotal and circumstantial but surely some of the UK’s relatively high graduate over-qualification must be due to the attraction it holds for foreign graduates who are prepared to do all sorts of jobs. It is true that some UK born graduates are also finding themselves having to take lower-skilled and lower-paid jobs but that isn’t the only reason for the graduate colonisation of lower skill occupations. It’s yet another symptom of the UK’s, and especially London’s, idiosyncratic labour market.

9 Responses to Graduates and the finishing school effect