Osborne not the Dick Dastardly of state-shrinkage after all

A year or so ago, some of us got into a discussion about whether or not George Osborne is an ideologically driven state-shrinker. Some people think he is, others, including Chris Dillow and me, think he isn’t. Wednesday’s Autumn Statement must surely have settled that argument.

Firstly there is the extra £27 billion in tax receipts the OBR found down the back of the sofa. What would a small state ideologue have done with an extra £27 billion? Not what the chancellor did, that’s for sure. He spent most of it on public services and welfare.

As Chris Giles points out, the chancellor is also planning to increase taxes:

There are 31 policy measures outlined in the official documents. By 2020-21, all but two of these are the equivalent of tax increases to improve the public finances.
The most significant increases are the implementation of the apprenticeship levy, forcing companies rather than taxpayers to pay for training, at £3bn a year. Other significant revenue raisers are the higher stamp duty rates on additional properties and large rises in council tax bills earmarked to shore up the social care and police budgets. The OBR expects the Autumn Statement directly to increase council tax revenues by £2.2bn a year at the end of the forecast. 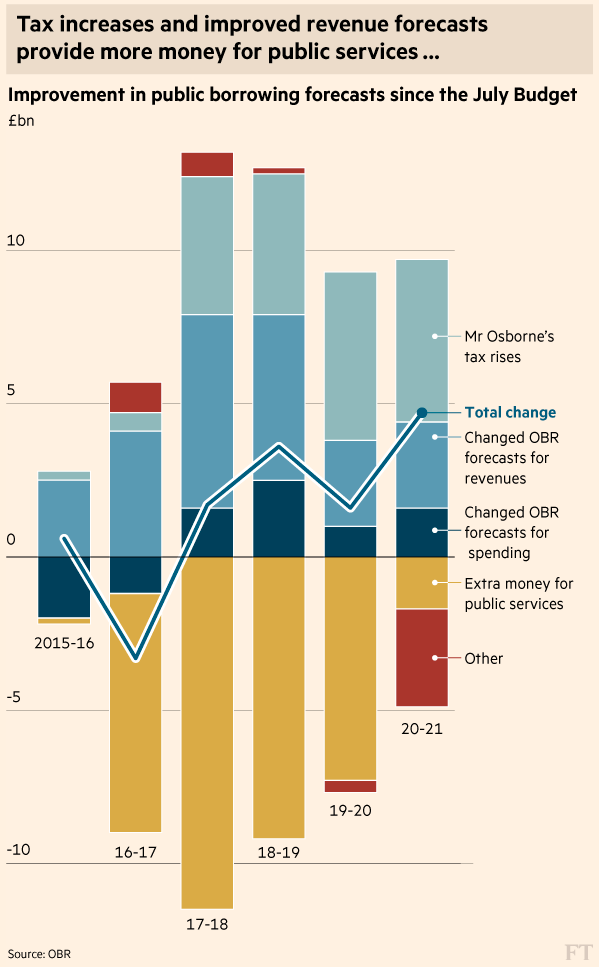 The result of this is that, while the last parliament could reasonably be described as one of state-shrinkage, with most of the deficit reduction load falling on public services, this one will be a lot less so, with tax contributing more to the reduction of the deficit. 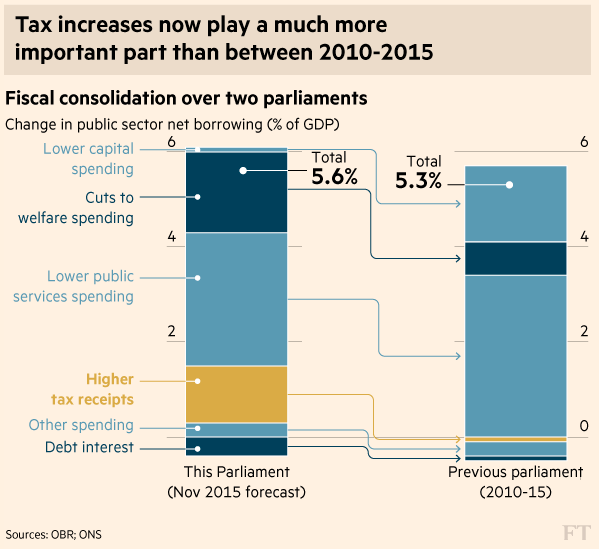 This is still austerity but it is pragmatic austerity. We no longer hear the blood-curdling war cry demanding even more cuts over the next five years than the last. In one year, George Osborne’s plan for public service spending has gone from utterly bonkers to might-just-be-doable.

As Gavin Kelly said yesterday, the chancellor is so pragmatic he will nick ideas from anyone:

Indeed the plans now look more like what we might have expected to see had Labour won power. Mr Osborne has confirmed in his Summer Budget and then Autumn Statement not just his political pragmatism but also his openness to ideas from a variety of sources: he’ll steal ideas from both Ed Miliband or Ed Balls.

To the surprise of many people, including me, the level of satisfaction with public services hasn’t changed much since 2010. Recent research by IpsosMori found that three-quarters of the population have barely noticed any difference. 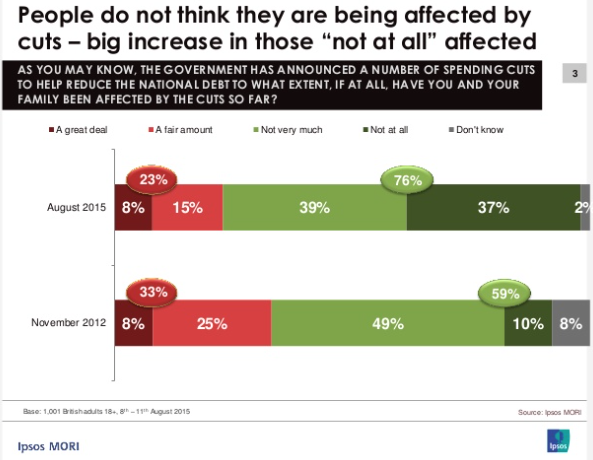 The Local Government Association’s survey found something similar. It noted a slight decline in satisfaction with council services but nowhere near what you might have expected given the level of funding cuts. 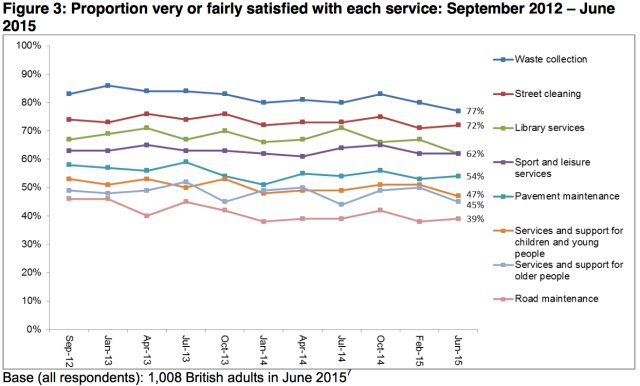 In other words, the government pretty much got away with it last time round. There are signs that people are beginning to get worried about further cuts though. The IpsosMori survey shows that people are less optimistic when asked about the future of specific services.

In general, the voters don’t share politicians’ and think-tankers’ enthusiasm for much smaller government. Opinions may fluctuate on whether spending should increase or stay the same but there has never been much enthusiasm for shrinking the state. 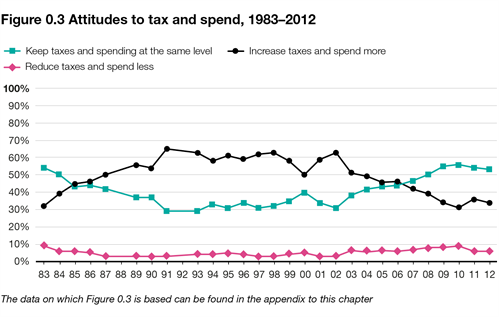 With local government and the NHS likely to struggle over the next five years we may be getting close to the point where the British decide they have had enough state-shrinkage for now. George Osborne, being an astute politician, has probably sensed that.

I’m not sure that the chancellor ever really wanted to shrink the state in the way that some of the people in his party would have liked. The measures in the Autumn Statement are hardly the actions of someone hell-bent on small government. The chancellor was boxed in by his promise to eliminate the deficit by 2019-20. The first chance he got to do so without chopping off parts of the state, he grabbed with both hands.

I suspect this has much to do with the Conservatives’ unexpected re-election and with it the very real prospect of George Osborne becoming prime minister. With Labour in such a mess, there is also a good chance that he might be prime minister until 2025. Destroying bits of the state doesn’t look like such a good idea when you are the one who is going to have to deal with the consequences.