Allister Heath reckons economists are complaining too much about Britain’s dismal productivity:

Too few economists seem prepared to accept that at least some of the UK’s productivity shortfall was a good thing. It happened because a large number of low productivity workers found work in the UK, dragging down the average. Similar workers have not been able to get jobs in other countries.

Productivity in countries like France, he says, is only higher because they have kept all their low productivity people from getting jobs:

To see why this matters, consider the following thought experiment: imagine two countries with identical economic characteristics and where the bottom 10pc of workers contribute 5pc of output. In the first country, a new law is passed banning them from working. They all lose their jobs, GDP drops by 5pc – but productivity shoots up by 5.5pc. Now imagine that all these workers move to the second country and immediately find work. That economy’s GDP goes up by 5pc, but because the number of workers rises even faster, average productivity falls by 4.5pc.

What country would you prefer to live in? The one being cheered by economists for its buoyant productivity and high-wage model, or the one with booming employment, where migrants, the young and labour market outsiders all find work?

So the UK, with its welfare reforms and flexible labour market, has encouraged the shirkers and the poorly skilled to get back into work. The downside is that productivity falls because a lot of these ‘labour market outsiders’ are not very good.

It sounds very plausible and it’s an argument that seems to have a lot of traction. I’ve seen a couple of TV discussions recently in which the productivity puzzle was framed as a problem of poor quality workers.

But, while it may sound plausible, it’s wrong.

Firstly, almost all the job growth since the point where productivity growth stalled has been in high skilled occupations.

Now it might be that some of this is due to people bigging themselves up in the Labour Force Survey but the numbers are so big that, even allowing for such an error, the pattern is clear. People in high skilled occupations make up a greater proportion of the workforce now than they did before the recession.

Over the same period, not only did the percentage of employees in high skilled roles increase, so did the proportion of workers with tertiary education. 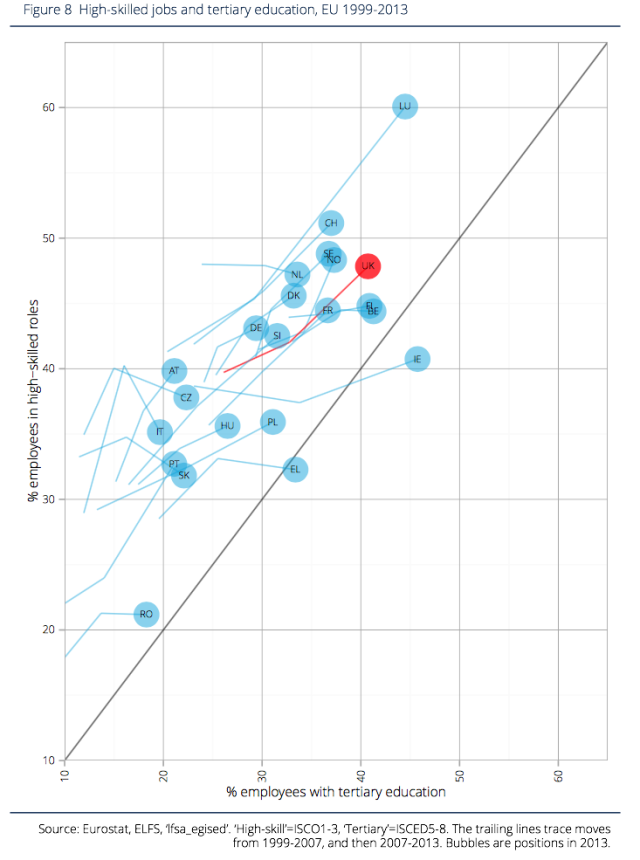 Compared with many other EU countries, a high proportion of the UK’s workforce is both highly qualified and in high skill occupations.

A recent paper by Peter Goodridge, Jonathan Haskel and Gavin Wallis concluded that the make up of the labour force could not have been the cause of low productivity.

[I]ncreased growth in labour composition is driven by (a) an increased employment share for the high-skilled, and (b) strong falls in hours worked of the low- skilled.

[T]he inclusion of labour quality (composition) deepens the productivity puzzle….. [I]t is not the case in the recession that, for example, there was a move to low skilled workers, either in terms of quantity or price, that lowered the composition of labour and so slowed productivity growth. Rather, the opposite occurred.

The ONS agrees (my emphasis):

Labour composition has made positive contributions to output growth in every year since 2000, but notably since 2008.

As noted in Franklin and Murphy (2014), the positive contributions since 2008 have exacerbated the ‘productivity puzzle’ as it implies labour input to production has been even stronger than implied by a non-weighted measure of hours worked. Alternatively, it also implies that the average productive potential of each hour worked has improved over this period, reflecting – on average- a shift towards labour market attributes that are associated with higher productivity such as educational attainment and experience. 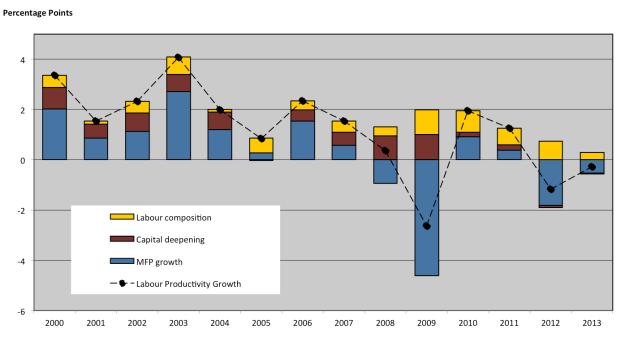 In short, then, productivity has fallen in spite of the quality of the labour force not because of it.

It may be that some new jobs have been created for the poorly skilled and that some long-term unemployed have been nudged back into work. This can’t be the reason for the fall in productivity, though, because such workers make up a smaller proportion of the labour force than they did before the recession.

Low productivity, and therefore low wages, can’t be explained as the price we pay for getting labour market outsiders back to work. The skills, qualifications and capabilities of our workforce are as good as they have ever been, if not better. Since 2007, we have seen a high skill, low productivity, low pay employment recovery. Whatever else is responsible for the UK’s fall in productivity, it’s not the quality of our workers.