David Cameron keeps promising to maintain the ring-fence on NHS spending. Not a penny of the NHS budget will be cut, he said again last month. The trouble is, even that doesn’t look like it will be enough. According to studies by the Kings Fund, health costs increase somewhere between 3 and 6 percent faster than inflation. Rising costs and demand mean that the NHS needs real-terms budget increases just to stand still. NHS England forecasts that the service will need another £30bn per year by 2020.

In its recent Green Budget, the Institute for Fiscal Studies looked at how productivity improvements might reduce the need for extra funding.

Relatively modest sounding productivity increases of 1.5 percent would halve the amount of extra funding needed. More ambitious ones might even reduce it by around three-quarters.

The trouble is, the NHS has never been able to make consistent year-on-year productivity improvements. According to figures released by the ONS on Friday, while there has been the odd jump in health service productivity, it has usually been followed by a slowdown or even a fall. The record 3.5 percent jump in 2011 was followed by 0.9 percent in 2012. 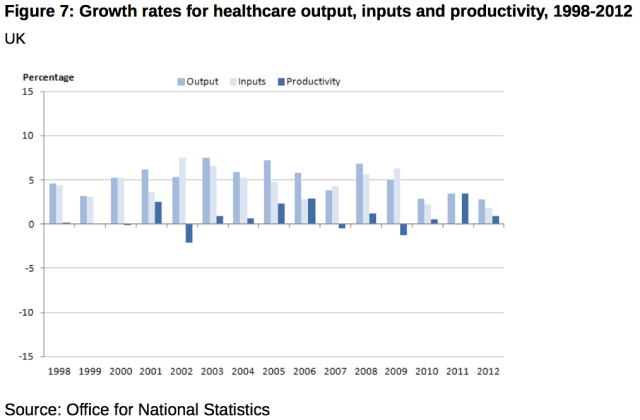 Steady productivity improvements are more difficult to achieve than one offs. A sudden cut in funding creates a sense of crisis and people respond well to crises. It’s much easier to manage people when there is an all-hands-to-the-pumps emergency than during the day-to-day slog of steady-state. The NHS handles emergencies well. That’s one of its main purposes and it attracts the sort of people who work well in situations of extreme urgency. I wasn’t at all surprised that the Royal Marsden re-opened less than a week after a fire and full evacuation. I’m also not surprised that the NHS is plagued by project failures. It does emergencies well and the humdrum less so. The NHS’s history of heroic productivity improvements followed by nothing the following year is entirely consistent with its culture.

As if the task of improving health service productivity wasn’t hard enough, the government’s reorganisation seems to have made things worse. A review of the reforms published last week by the King’s Fund was damning.

The first half of the 2010–15 parliament was taken up with debate on the Health and Social Care Bill, the biggest and most far-reaching legislation in the history of the NHS. The second half of the parliament was devoted to limiting the damage caused by the Bill and dealing with the effects of growing financial and service pressures in the NHS.

Arguments about privatisation distract from the much more important and damaging impacts of the reforms on how the NHS is organised and the ability of
its leaders to deal with rapidly growing financial and service pressures. By taking three years to dismantle the old structures and reassemble them into new ones,
the government took scarce time and expertise away from efforts to address these pressures.

In any organisation, restructures divert people’s energy away from other activities. Shortly after the proposals were published, the right-leaning think tank Civitas warned the government that a drop in performance was likely with a reorganisation of this scale. Eighteen months in, the Commons Health Committee found that the disruption and distraction caused by the restructure was hindering efficiency savings.

The organisation that emerged from this upheaval is, says the Kings Fund, more complicated than the one it replaced.

The complexity of the new structures that resulted from the 2012 Act has proved equally damaging. An unwieldy organisation has emerged from debates on the reforms and compromises made along the way in what can best be likened to
a Heath Robinson construct.

All of which makes increases in productivity even less likely.

In any case, productivity improvement in service organisations is no easy task. This Bank of England report showed that, in the decade before the recession, the UK private service sector improved productivity by 2.3 percent per year. That was unusually high by international standards and, along with the rest of the economy, its productivity has stalled since the recession. Given this, the recent history of NHS productivity gains and the damaging effects of the recent re-organisation, surely annual productivity growth of 2.4 percent for the next five years is on the outer edge of optimism.

And even under the 2.4 percent scenario, the NHS will still need more money in 2020. The health service faces a smaller scale version of general public spending dilemma. The upward pressure on costs is too great to be met from productivity improvements alone. It therefore needs more funding (which means more taxes or government borrowing) or it will have to stop doing much of what it currently does for free. Neither of these options is likely to be popular but things can’t go on as they are.

A pledge to give the NHS inflation linked budgets is a pledge that it will run out of money by the end of the decade. Sooner or later, something has got to give.