Yesterday, what was left of the government’s deficit reduction plan moved even further into the realms of fantasy.

In its latest Economic and fiscal outlook, the Office for Budget Responsibility reduced its forecast for tax receipts over the rest of the decade.

[T]his year has seen a sharp fall in the amount of tax raised for every pound of measured economic activity. As a result, despite strong economic growth, the budget deficit is expected to fall by only £6.3 billion this year to £91.3 billion, around half the decline we expected in March. That would be the second smallest year-on-year reduction since its peak in 2009-10, despite this being the strongest year for GDP growth.

The key reasons for the deterioration in the underlying forecast are:

The result is that the outlook for public finances has worsened. Add in the government’s plans to reduce public spending and things start to look very bad for public services.

The government has said it isn’t going to increase taxes and it will find it hard, if not impossible, to take significant amounts off social security spending. Spending on public services therefore has to bear the brunt of any cuts, including any fall in projected revenue.

As this chart shows, AME (mostly welfare and debt interest) falls only very slowly for the rest of the decade, so the spending reduction has to come from cuts to public service spending (DEL).

This, says the OBR, is a real-terms fall of around 25 percent and of 31 percent in per capita spending.

But spending on health, schools and overseas aid is to be protected. The OBR’s estimates for the revenue components of that spending are in this next table, with the impact of maintaining the protection in the column on the far right. 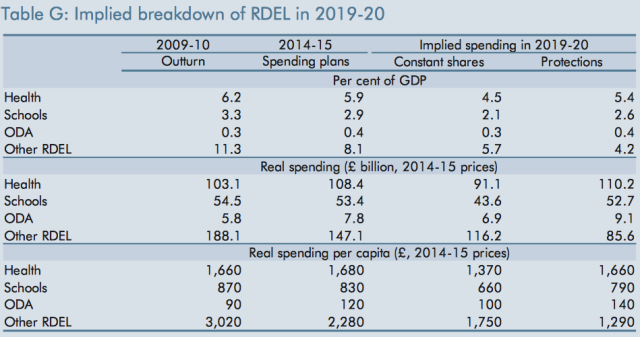 If health, education and aid are protected, then, we would be looking at a real-terms cut of 55 percent and a per capita cut of 57 percent for spending on everything else.

Let’s assume revenue spending on defence stays at this year’s 1.5 percent of GDP (if it falls much lower we’ll be in trouble with NATO). The OBR’s last Fiscal sustainability report estimated the cost of long-term care in 2019-20 at around 1.3 percent of GDP. Under these plans, then, that would leave about 1.4 percent of GDP for everything else.

All of which leaves local councils’ budgets looking very tight, even after they have raised extra cash from council tax. 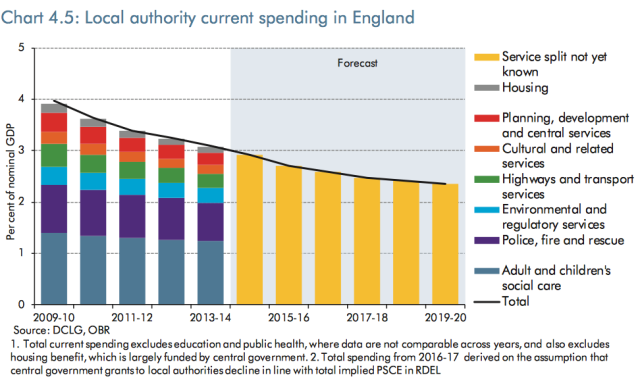 You don’t need to look at these charts for too long to see the problem. The share of GDP taken by the big blocks on the bottom, health, education, social care (which includes elderly care) and emergency services, is unlikely to change much. Therefore everything else gets squeezed to the point where some services disappear.

There is no strategy for closing down parts of the state. Outside fringe meetings and think tanks, it hasn’t been discussed and it certainly won’t feature in anyone’s manifesto. Any decisions would therefore be reactive, piecemeal and random. Some councils would simply start closing services as they ran out of money.

It is very unlikely that this will happen. Even Conservative voters, for the most part, don’t want it. Eventually, whoever is in power after 2015 will have to push out the deficit reduction timetable, probably to the end of the decade, and raise taxes.

The precarious labour market and has pushed the Chancellor’s deficit reduction plan even further into La La Land. What little credibility it had has vanished along with the tax receipts. It’s time for politicians in all parties to close the Candour Deficit and start talking about what’s really going to happen in the second half of this decade.