A report by the IFS earlier this week found that the government’s social security cuts had saved nowhere near the amount it expected. The £19bn it had hoped to save turned out to be only £2.5bn. While the cost of Job Seekers’ Allowance fell, spending on pensioner benefits, housing benefit and tax credits was much higher than the government anticipated. The IFS warned that rising housing benefit and tax credits “means that slow earnings growth now has the potential to push up spending too.”

The government may boast that its welfare reforms have nudged people into work but the impact on public spending (ostensibly the reason for the cuts) has been disappointing to say the least. People might have come off Job Seekers’ Allowance but many still rely on other benefits for support. Falling real wages and rising housing costs have squeezed household incomes to the point where more people need their incomes topped up with tax credits and their housing costs supported through housing benefit.

The Office for Budget Responsibility keeps having to revise up its projections for housing benefit spending. Its recent welfare trends report explained why. With the number of private renters rising and rents increasing faster than wages it’s not surprising that housing benefit costs have risen by so much.

The housing benefit forecasts of four years ago were based on assumptions that have turned out to be way too optimistic. 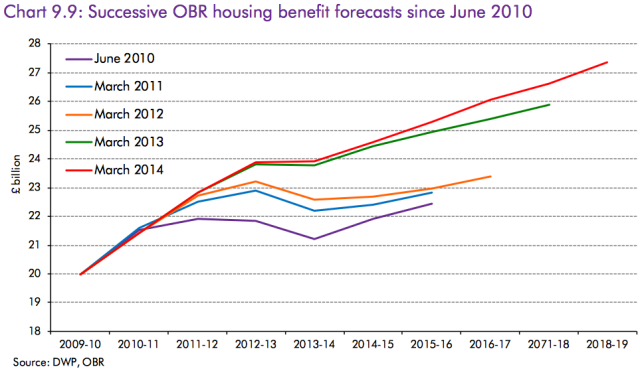 Given the falling level of home ownership, especially among younger people, rising rents are likely to eat into more and more people’s incomes.

An increase in wages should help but, despite the excitement over pay slightly outstripping inflation for the first time since 2009, growth is likely to be sluggish for the next year or so. As the Resolution Foundation’s Matthew Whittaker said yesterday, real median weekly pay has fallen to where it was in the early 2000s and the road back will be a long one. His colleague Laura Gardiner reminds us that official pay figures don’t include the self-employed, whose pay is, on average, lower than that of employees. Yesterday’s ASHE figures look dismal but even these are flattered by excluding the self-employed.

Rising benefit costs, then, are not just a fiscal problem. Cutting rates and entitlements in an attempt to force people back to work doesn’t necessarily lead to big reductions in benefit spending. As the IFS showed, while the cuts cause distress for those on the receiving end, the amount saved has been relatively small. That’s a lot of pain for not very much gain. To get people off benefits isn’t just a case of getting them back to work. They need to be in jobs that pay enough to cover their housing costs and feed their families. Otherwise, people simply shift from one benefit to another.Poor wage growth and rising rents mean that the number of people needing benefit support probably won’t fall by much over the next couple of years. Any further attempts to drastically reduce the cost of benefits will fall most heavily on those hardworking families the government keeps telling us about. All of which makes George Osborne’s “£12 billion of further welfare cuts in the first two years of next Parliament” look like a deluded fantasy.