This job polarisation thing, does it really look like an hourglass or is it more of a cocktail glass, or even a beer glass?

It’s a question I’ve been asked a lot recently. No, really…

Both images have been around for a while now. The hourglass shape suggests that the middle of the labour market is being squeezed while the top and bottom are growing. The cocktail glass shape implies that most of the increase is at the top end. Of course, this depends on how you define the top, the middle and the end.

If we use the ONS occupational classifications, we can see the cocktail glass effect quite clearly over the last two decades. The UK Commission for Employment and Skills (UKCES) Working Futures report contains projections to 2022 which show the trend continuing.

I’ve plotted their figures using the same horizontal axis on all three charts so we can see the extent of the changes and the overall size of the workforce more clearly. 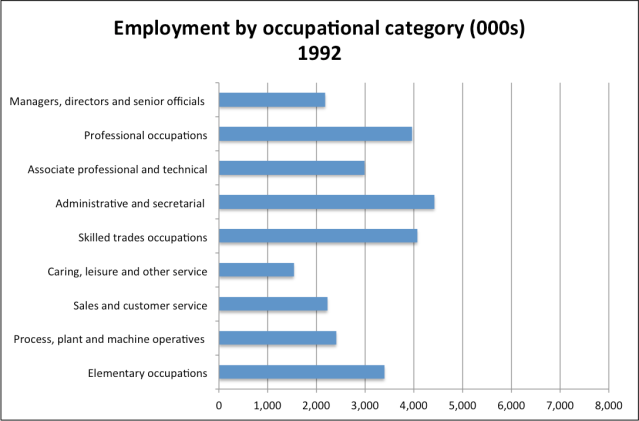 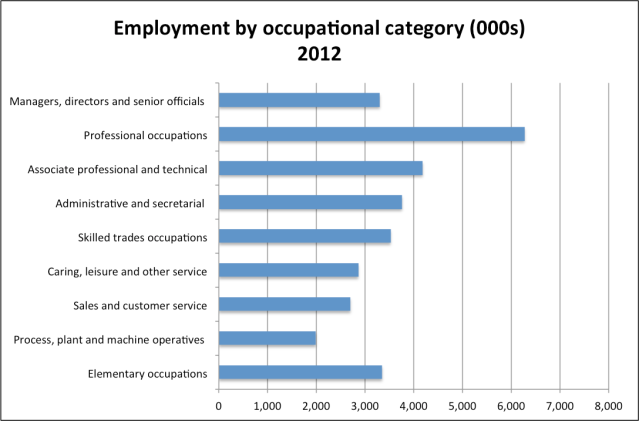 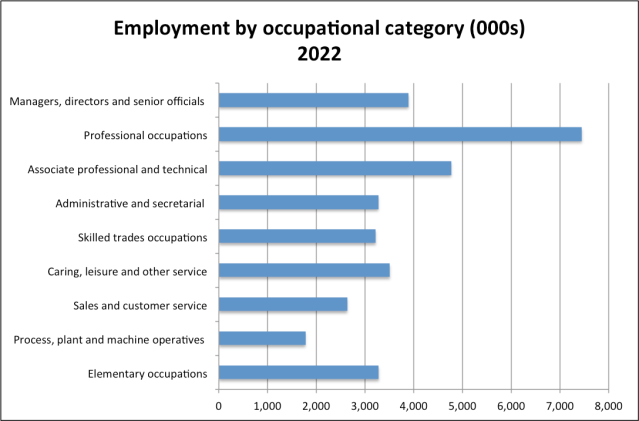 Based on the occupational classification, then, the current shape of the labour market does look something like a cocktail glass. The number of people in elementary occupations has stayed more or less the same, though falling as a proportion of the workforce. Big falls in the number of people in skilled trades, process and administrative jobs have been offset by big rises in the top three categories, notably the professional occupations. There has also been a big increase in caring and other service jobs. The UKCES forecast suggests that these trends will continue over the next decade.

The ONS categories don’t tell us the whole story though.

The Resolution Foundation’s report on job polarisation looked at the shift in jobs based on wage distribution. Rather than grouping jobs by a skill classification, they ranked them on the basis of mean hourly pay at the start of the period, then mapped the change over time.

This gives something that looks a bit more hourglassy, with growth at the bottom and the top. The change since the recession (on the second chart) is almost a perfect hourglass. 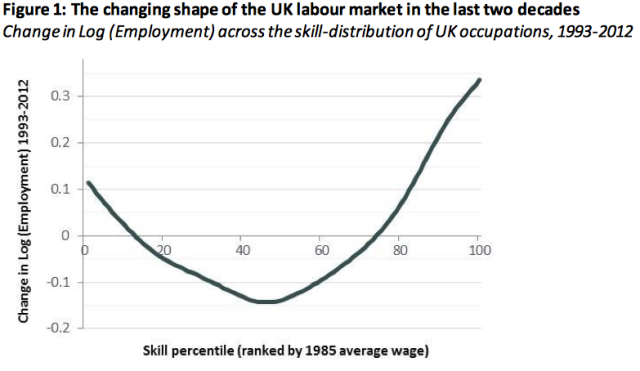 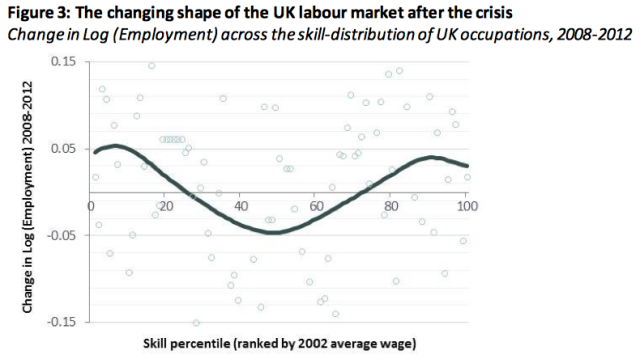 LSE’s Alan Manning, who came up with the term ‘job polarisation‘, noted this rise in the highest and lowest paid occupations, and the corresponding fall of those in the middle, in 2007.  This chart from his CentrePiece paper last year shows this trend continuing during the last decade. 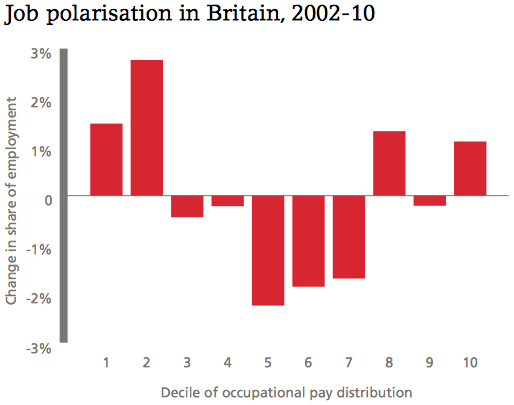 When we look at skill categories, then, the big increase has come at the top (the cocktail glass) but when we look at pay distribution, there are increases at both top and bottom and a fall in the middle (the hourglass).

At one time we might have assumed that an increase in the number of professional jobs would have meant an increase in pay levels but these findings suggest that isn’t necessarily so. As I noted recently, in recent years we have seen an increase in high skill jobs at the same time as real earnings have collapsed.

[M]any of these apparently good jobs continue to earn middle wages despite higher status job titles. We find evidence that there has been a growth in lower paid jobs within a category of jobs generally considered to be well-paid. For example, in the retail and wholesale sector, where managerial jobs increased between 2000 and 2008, the proportion of these jobs earning below £400 per week – adjusting for inflation – increased from 37 per cent to 58 per cent in this time period.

In other words, some of the new professional and managerial jobs don’t pay very well and certainly don’t pay as much, relatively, as jobs with those tags would have paid twenty years ago.

Furthermore, there is a polarisation taking place at the top as the very well paid pull away from everyone else.

The consequence of the highest paid moving away from the rest of workers earning above-average wages is that work in the upper half of the distribution has itself become more polarised. A number of relatively ‘good’ jobs begin to look a lot more like mid-wage jobs.

Within managerial and professional occupations, the largest change in wage differentials seems to be at the top of the distribution. One interpretation of this is that there is a widening of earnings within the good non-routine occupations, which suggests many of these apparently good jobs are less-well paying than has been previously suggested.

For example, as this pay distribution chart for retail managers shows, a greater proportion were in the low-to-middling pay bands in 2008 than in 1993. 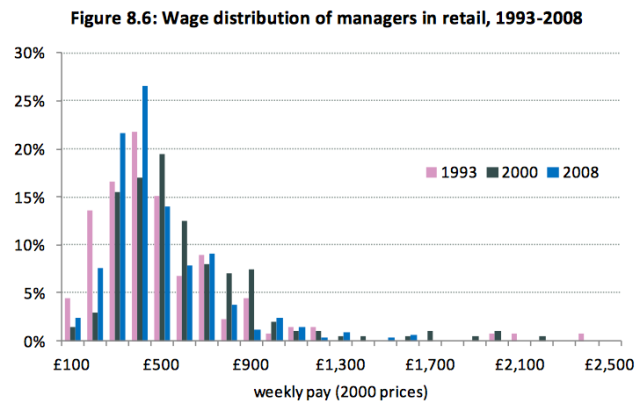 I suspect that something similar is happening in a lot of professional and managerial jobs. I’m reminded of Mark Easton’s story of the youth worker made redundant and going freelance, earning a third of her former salary.

While the change in the skills profile might suggest that a lot more of us are in posh jobs these days, the pay data suggest something different is going on. We can have both a high skill and a low wage recovery because a lot of the new jobs in the high skill categories are not particularly well paid. The labour market might look like a cocktail glass but, when it comes to pay, a lot of people are sliding slowly down the stem.