Lost decade? We used to dream of a lost decade!

Last week’s employment statistics showed that the UK has finally closed its jobs gap. There are now as many people in work, as a percentage of 16-64 year olds, as there were before the recession. As Laura Gardiner said, though, the headline obscures some regional differences. The recovery is still weak in the West Midlands, Wales and Northern Ireland and even the South East outside London still hasn’t recovered its pre-recession employment rate.

There are other differences between now and before the recession. Two thirds of the job increase has come from self-employment and there are still fewer full-time employees than there were in mid-2008. 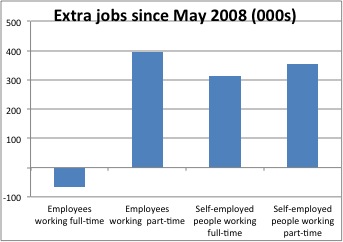 Chart via Thomas Brooks and Kayley Hignell at CAB.

Pay remains in the doldrums. E&Y predicted a lost decade last week, with real-terms wages failing to get back to pre-recession levels before 2017. Even this depends on how you measure it, as Gavin Kelly and Matthew Whittaker said earlier this year. Measure the mean wage against the Consumer Price Index and we get a recovery by 2018. If we look at the median wage, which is not pulled up by the high earners at the top, the recovery looks a lot weaker. Measure it against versions of the Retail Price Index, which includes housing costs, and it doesn’t recover at all. 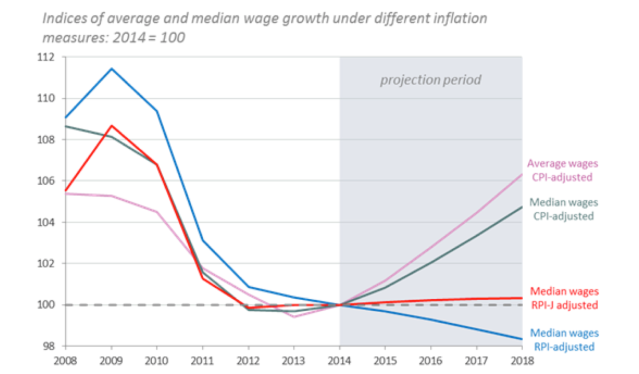 Lost decade? We used to dream of a lost decade!

In the Observer at the weekend, Tony Dolphin wrote of the relentless slide towards a low-pay Britain.

Clearly something very unusual is happening in the labour market and it is not just a post-recession phenomenon. The recession has merely exacerbated a trend that has been in place for the past three decades: a polarisation of the labour market.

Employment growth has been strongest in the high-skilled and low-skilled occupations, but the number of jobs requiring mid-skilled workers – skilled tradespeople, machine operatives and administrative and secretarial workers – is shrinking.

The Economist ran a series of articles a couple of weeks ago on the polarisation of the labour market. Ten years ago, they weren’t at all convinced about it. Now, they reckon it’s been happening, to varying degrees, across the developed economies. 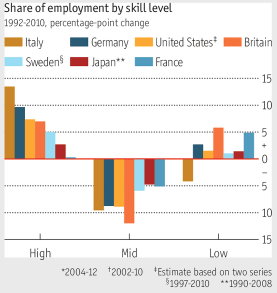 Until now, it’s the jobs of mid-skill manual workers that have been hardest hit but, as technology advances, it is starting to replace middle-class jobs too.

[T]he rise of machine intelligence means more workers will see their jobs threatened. The effects will be felt further up the skill ladder, as auditors, radiologists and researchers of all sorts begin competing with machines. Technology will enable some doctors or professors to be much more productive, leaving others redundant.

And so far, new technology does not seem to be replacing old jobs with that many new ones.

[W]ealth creation in the digital era has so far generated little employment. Entrepreneurs can turn their ideas into firms with huge valuations and hardly any staff. Oculus VR, a maker of virtual-reality headsets with 75 employees, was bought by Facebook earlier this year for $2 billion. With fewer than 50,000 workers each, the giants of the modern tech economy such as Google and Facebook are a small fraction of the size of the 20th century’s industrial behemoths.

It is possible to build a global behemoth now with a workforce not much larger than that of a county council, as Shane Granger shows on this chart. 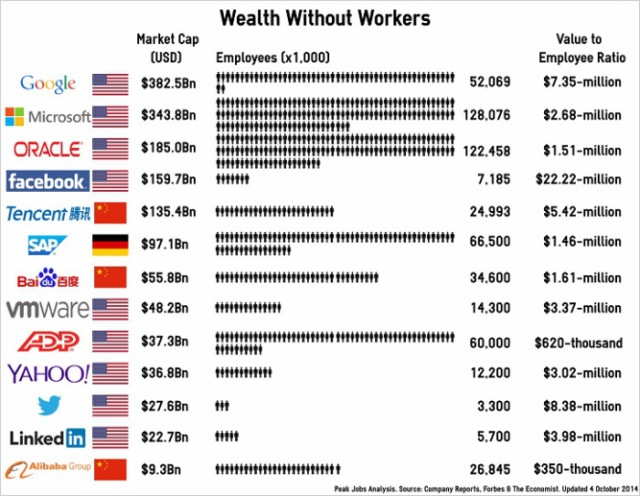 Shane spotted something else too.

The extraordinary data-point that I found from looking at the data is that the combined market capitalisation of the Wealth without Workers companies is $1.541-trillion but only employs 558-thousand people (a VtER of $2.76-million). Again to give those figures some context if this were a country they would be invited to the G20, have a GDP just $20-million under Australia (the 12th largest global economy in 2013 figures) yet the population would only equate to the Gold Coast (in Australia), less than Bristol (in the UK) or Albuquerque (in the USA).

That’s half-a-million people sharing a hell of a lot of money. Not equally, of course, but even the relatively junior ones are getting a big wedge compared to most of the rest of the world.

Between now and 2022, the UK Commission for education and Skills (UKCES) forecasts an increase in the number of high skilled jobs and in those service areas such as caring which, so far, have been relatively immune to automation. 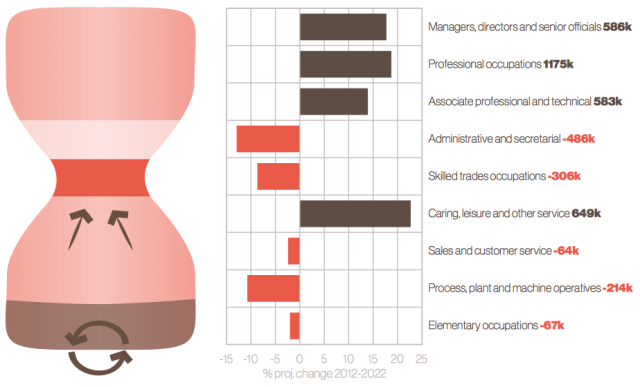 What will happen to the displaced mid-skill workers? Will they re-skill and move in to the higher skill jobs?

So far, not much of that seems to be happening. Here’s Tony Dolphin again.

Mid-skilled workers who lose their jobs initially try to find a comparable job that makes full use of their talents. Some succeed but, because of the shrinking number of mid-skilled jobs, many do not. They do not have the qualifications to move up the skills ladder, so eventually they are forced to move down it and compete for low-skilled jobs. Employers faced with many applicants for every low-skilled vacancy are therefore under no pressure to increase wages. At the same time, increasing numbers of people who cannot find the type of work they want are opting for self-employment, even though it means earning less than they formerly did.

So as the machines move up the skills ladder, most of the workers move down it.

As UKCES says, it’s fine if you get a good start but it’s becoming much more difficult to move up the ladder later in life.

The projected changes are likely to result in significant differences in the labour market profile, occupational structures and career routes available, as while some intermediate roles would emerge, their overall volume would be reduced. This could result in a labour market with great prospects for those able to demonstrate talent early, but with fewer pathways for those who need to progress to higher skilled occupations through career development in work.

You don’t need much imagination to see the implications for social mobility (or lack of it), the accumulation of advantage over the next generation and increased inequality. It also doesn’t bode well for the public finances. Wealth without workers has a habit of leaving the country for offshore tax havens.

It may be that some of these forecasts are unduly pessimistic. After all, the fear of machines putting people out of work is nothing new. Looking at the recent trends, though, there is a shift taking place in the demand for labour which, added to the effects of an almighty recession and government spending cuts, is hitting employment and wages for all but the most highly skilled. So far, economic growth hasn’t done much for wages, steady full-time employment or tax revenues. There’s not a lot to suggest this will change much over the next five years.

5 Responses to Lost decade? We used to dream of a lost decade!