The spirit of the age

The announcement by former boxing promoter Frank Maloney that he is undergoing gender reassignment was met with less hostility and more support than I (and probably he) expected. Boxing is, after all, a very macho world and transgender is probably the last frontier of sexual liberalism, the subject still causing the odd row even among liberal types. Even so, things seem to be moving in favour of social acceptance and equal rights. It took courage for someone in Maloney’s line of work to go public about a sex change but he probably got less rough treatment from the media than he would have had ten years ago.

I was reminded of this when I read Giles Wilkes’s comments on John Campbell’s biography of Roy Jenkins. More than any other politician, Jenkins symbolises the 1960s liberal attitudes which, eventually, prevailed in Britain in the subsequent decades.

[H]e achieved an astonishing amount in a short time in the Home Office In less than two years he helped end flogging in prisons, legalise homosexuality and abortion, end theatre censorship, and bring in a Race Relations bill. The latter is despite the fact that both the TUC and CBI opposed Jenkins’ measures to improve racial equality. The author explains the former simply with “there was still a lot of casual racism in the workplace”. I still don’t understand it.

I do but then, I’m nearly a decade older than Giles. In the 1960s and 70s, a lot of the trade union left wasn’t all that liberal. It fought for workers’ rights. It was ambivalent, or sometimes hostile, to claims for equality based on anything else. Casual racism didn’t only take the form of personal abuse; it was prevalent in the language people used. A sentence like, “I’ve been working like a black and now they’re trying to jew me out of my overtime pay” would have passed without comment in many 70s workplaces. People would have been bemused by the suggestion that someone might take offence.

The change in how people view sexism, sexuality and racism has been the biggest shift in attitudes I have seen in my lifetime. The decline in smoking and drink driving run them pretty close but they had the terror of cancer and driving bans to back them up.

Sure, the law has played its part. Nowadays, a manager couldn’t tell another to “get his typing done by the wog” and win the resulting tribunal case. He could get away with it in 1985 but he probably couldn’t now.

The law has criminalised the worst of racism and sexism but social disapproval has done its bit too. Much of what used to be common racist language has been banished to quiet pub corners and people’s front rooms. It’s not allowed out in public any more. Rather like persistent drink-driving, it’s something only diehards of a certain age do.

What makes attitudes change is a subject that has perplexed social scientists for years. A report by Institute for Social and Economic Research (ISER) in 2010 explained:

Changes in attitudes across time are considered to be the result of three general processes: generation (or cohort) replacement, life-cycle (or age), and period effects.

I’ve always thought the ‘one funeral at a time’ effect, where people holding the old views gradually die off, taking their attitudes and prejudices with them, was a little pessimistic. After all, I’ve changed my mind about stuff over the years so I’m sure other people must do too.

There’s some fascinating research from IpsosMORI on this. Looking back through the British Social Attitudes survey they have mapped the changing social attitudes of age cohorts over time. That people get more conservative as they get older is one of those things that ‘everyone knows’ – except that they don’t, at least, not where attitudes to things like gender and sexuality are concerned.

Among all generations, even those born before the Second World War, attitudes towards gender roles and sexuality have become more liberal. 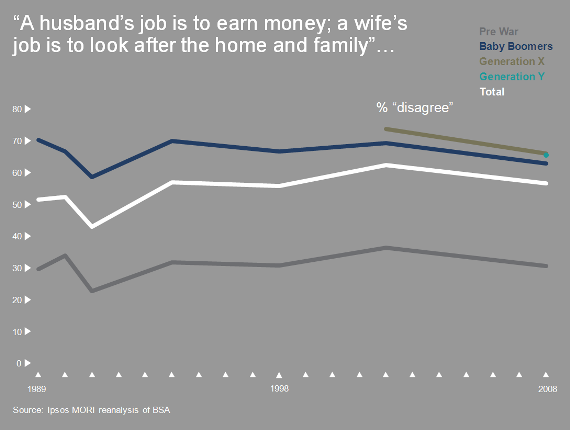 Attitudes to the death penalty, Roy Jenkins’s other signature policy, are also moving in the direction he would have liked. 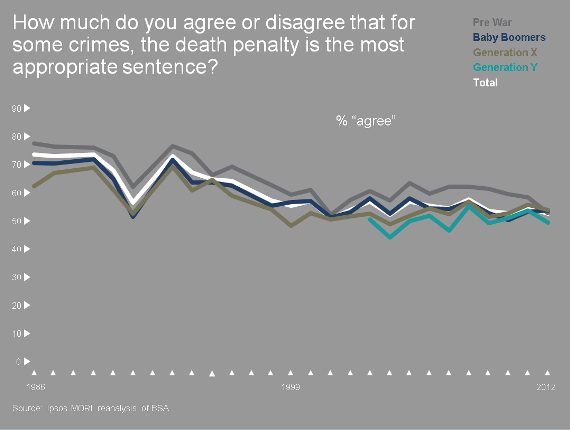 Of course, somewhere around fifty percent of the population still holds small c conservative views on these questions but, slowly, attitudes across the generations seem to be changing.

Some of the other charts, like support for the welfare state and monarchy, might provide less comfort for those on the liberal-left but almost all of them show similar patterns over time across the generations. So, for example, if support for the monarchy or NHS falls for a few years, it tends to do so among all generations. This suggests that politicians, commentators and the news may have more effect on people than they like to think. 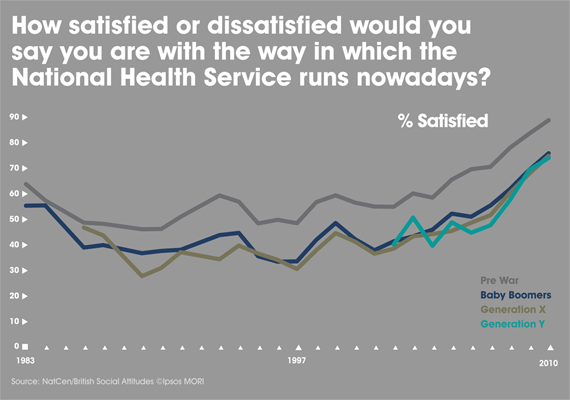 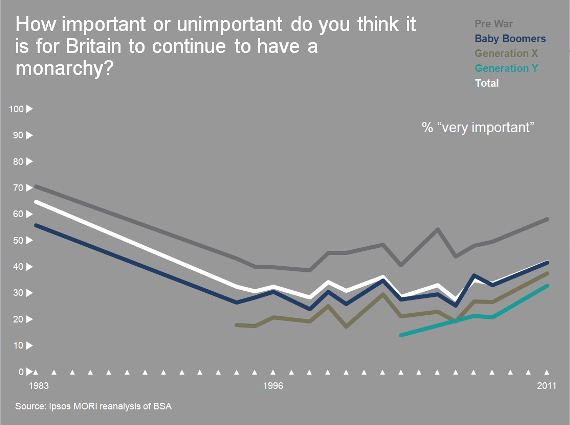 There is, then, an observable difference between generations but also evidence that the changes follow a similar pattern. The old are generally more conservative than the young but they get more liberal at the same rate. The most interesting thing about these charts is that the patterns track each other and show people changing their minds in similar patterns. So society is getting less homophobic not just because homophobes are dying off but because people who once thought being gay was wrong have changed their minds.

I’d be fascinated to see something similar for attitudes in the workplace. How have the attitudes of generational cohorts shifted over time? As I’ve said before, I’m sceptical about the attempt to categorise generational attitudes to work and I’ve yet to see any convincing evidence for it. We are constantly (to the point of tedium) being told that Generation Y want more freedom, more flexible working, less hierarchy and all that but I wonder if this is really a generational difference or just a symptom of wider changing attitudes. Just as Boomers and GenXers have become more liberal over the years, have they also decided that they too want a more autonomous and less deferential working environment?

A couple of years ago, I was at a conference where a Millennial told us oldies about all the things that Millennials want from work. I replied that I, as someone on the outer suburbs of GenX, I wanted those things too. I don’t think I’m unusual in that. I think many of us have changed what we want from the workplace. I know people who had a command and control approach 20 years ago who now have very different views about managing people. They are not trying to be down with GenY, daddio, they have just changed their minds about what works.

It’s not just funerals and retirements that change attitudes. The process by which whole societies change their minds about things is much more interesting than that. Generational attitudes waver and people move with the times. The word zeitgeist translates as spirit of the age. That spirit moves in mysterious ways.

5 Responses to The spirit of the age