Compared to previous years, there wasn’t much reaction to the OBR’s Fiscal Sustainability Report. OK, there was a hurrumph from Jeremy Warner, as you might expect, but that was about it. This may simply be because the OBR’s outlook was a little better than last time or, as Jeremy would have it, “not quite as unsustainable as it was a year ago”. But I wonder if something else is going on. Looking at the TV and newspapers recently, it’s almost as though austerity is yesterday’s news. The economy is growing, employment is up. OK, we’re still waiting for pay to rise but, on the whole, the recession is history.

Something else happened over the past year or so, though, which didn’t get much coverage. George Osborne eased off on austerity. Jonathan Portes noticed as did Simon Wren-Lewis and the IFS. 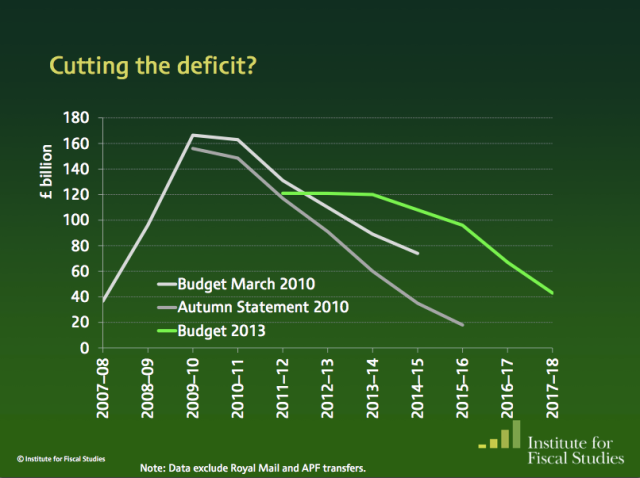 The government’s original plan to reduce public expenditure by 4 percent in real terms by 2015 (see page 44 of the 2010 budget) is now going to take another 4 years. But the aspiration hasn’t gone away, it’s just been kicked into the next parliament. What we will get, therefore, is back-loaded austerity. The pattern for public services funding is cuts, followed by an easing off, then another set of cuts.

The overall picture looks like this, DEL being spending on public services. (I went into the maths of all this a couple of months ago.) 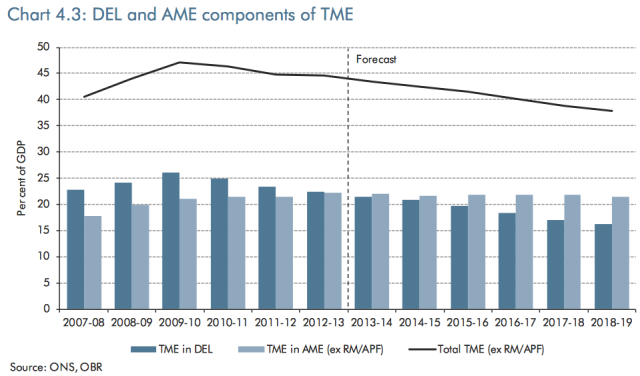 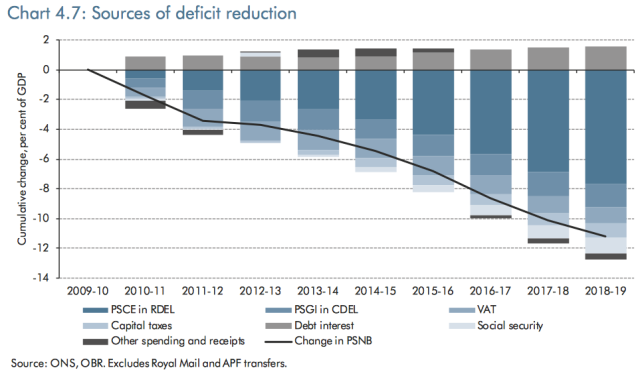 Which means this for the NHS. 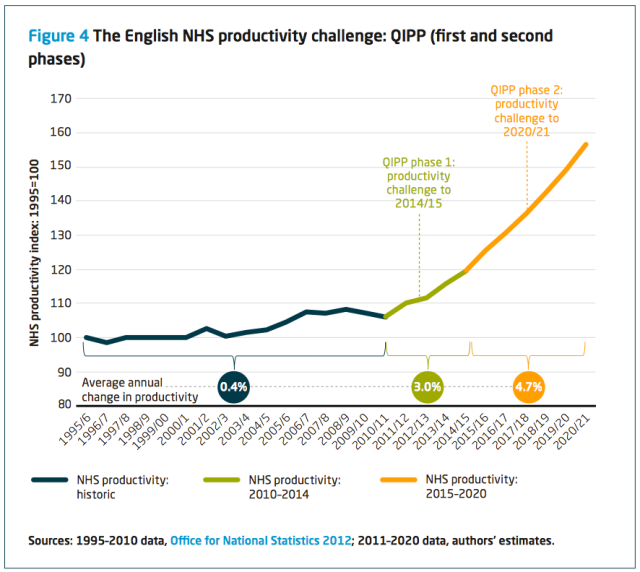 Charts via The King’s Fund.

And this for local government. 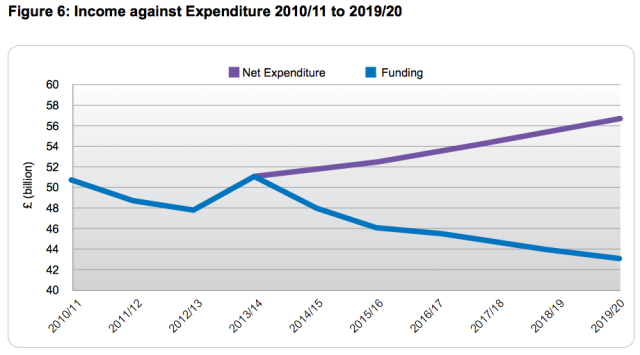 The funding problems in local government are like those for the overall public sector in microcosm. After taking out the nationally protected funding for health and schools, there are other services which local authorities are obliged, either by statute or by strong political pressure, to provide. This is, effectively, a further layer of protection. Inevitably, therefore, the cuts fall on those services without it.

So far, the largest reductions have been made in regulatory areas like planning and in sport and leisure. These are the areas where the fewest people are likely to notice and where the impact of cuts may not be seen for some years.

There’s worse, though. (Come on, you knew there would be.) The LGA’s funding projections on the graph above assume that councils will make efficiency gains of around 2 percent per year and introduce or increase charges for some services.

This level of efficiency gain should be just about do-able but, even with that, the LGA still reckons there will be a funding gap. It estimates that most councils’ reserves will be used by 2016/17 so, without an increase in funding, some services will simply disappear.

The overall picture, then, is one of back loaded austerity. Not only are the planned cuts over the next parliament bigger, they are likely to feel worse because the easy ones have already been made. To use Giles’s metaphor, if you give blood once, it seems easy. If you are then asked to give blood again and again over a short period, you will start to feel ill. Which is how a lot of public service providers will be feeling over the next few years.

At the moment, though, we seem to be in some kind of phoney war. The pressure has eased, the economy is on the up and no-one is mentioning the A-word. Or, fr that matter, the T-word. It’s as though the remaining deficit reduction has been taken as a done deal.

I know from Twitter that some organisations have been discussing the 2015 dilemma at length. I assume similar debates are taking place across the public sector. Among politicians and in much of the media, though, it really does feel as though austerity is yesterday’s news. It all feels a bit unreal when you look at how much of it is still to come.