We know there has been a collapse in self-employment earnings. The Resolution Foundation’s findings last week reinforced what the data from a variety of sources have been telling us for some time. The pay of the self-employed has fallen further and faster than that of employees.

One explanation often heard is that many of the the self-employed are on the fiddle. They declare their own earnings, so there is plenty of scope for them to declare less as times get hard.

There is some evidence to suggest that some profits and turnover may have been hidden by cash transactions in recent years. Estimates of the currency ratio by Morgan Stanley found that, after years of falling, the amount of cash in the economy began to rise after 2000 and has risen sharply since the recession, suggesting that a lot more cash transactions are taking place.

As they say in the report, “If this is not to be explained by a relatively sharp rise in the ‘grey economy’, then what else caused it?”

It is highly likely, then, that the amount of fiddling by the self-employed and others has increased since the recession.

But the collapse in self-employment incomes has been massive. There are 600,000 more of them but, in total, they managed to earn £8bn less than they did before the recession. (See previous post.) That’s a hell of a lot of fiddling!

The occupational profile of the newly self-employed also suggests that extensive fiddling of the books is unlikely.

Michael O’Connor’s chart, using data from the Labour Force Survey, shows that much of the increase in self-employment has come from those in professional and managerial occupations.

This is corroborated by data in the Resolution Foundation report on how the self-employed described themselves. Since the recession, there has been an increase in the number of people calling themselves freelancers, a term more commonly used by journalists and IT contractors than plumbers and market traders. 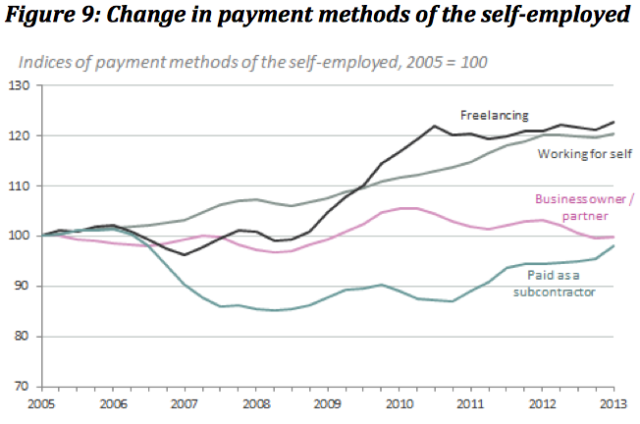 Now I’m not suggesting that those in professional occupations are any more honest than anyone else it’s just that fiddling is a lot more difficult to do. Many of those 200,000 or so professionals will be doing business with large organisations. I suspect a lot of them will be  doing at least some of their work for their previous employers. It’s very difficult to hide earnings when you are being paid electronically by large and regularly audited organisations. You can’t do “I’ll knock of the VAT for cash’ when you are dealing with a plc or a local authority, especially if it’s the one that used to employ you.

That so many of the newly self-employed are ‘professionals’ and ‘freelancers’ makes them less likely to be on the fiddle than those who were already self-employed, not because they are less inclined to fiddle but because there simply isn’t the scope. The Morgan Stanley figures suggest that thee has been an increase in hidden transactions but this can surely only account for a small amount of the fall in self-employed incomes.

The other explanation often heard is that new businesses take time to yield profit so, with all these new businesses, it’s no surprise that a lot of the are not making much money yet. That doesn’t explain the drop in incomes among the existing self-employed, though. They should be beyond such teething troubles.

Again, the nature of the newly self-employed also casts doubt on the ‘low income in early years’ hypothesis. I couldn’t find any research on the income patterns of freelancers so I’m relying on anecdotal information. That said, I do know a lot of contractors, interim managers and self-employed consultants.

In the olden days, the early to mid 2000s, their incomes often followed similar patterns. Typically, their earnings would reasonably good in their first years for reasons I discussed a while back. They would leave their employers with a certain amount of momentum carrying them forward. Lots of contacts, plenty of confidence and the prestige which comes from having been DirectorOfSomethingBig at WellKnownBrand Plc. Often, they would have storming first and second years. Then the people they knew would move on and their old employers would stop calling. Suddenly, they had to go out and develop business for themselves. Their earnings would therefore go in a U-shape, with a dip in the middle until they found new clients. For some, the upward bit of the U never came and they went back and got proper jobs.

That option is available to fewer people now though. What have seen happening since the recession is different. The sheer number of freelancers on the market is depressing both pay rates and the amount of work available. Where once, people might have had storming early years, they now have years of just getting by. Many are happy enough with this, glad to have left the corporate world but they are not seeing the sort of earnings they would have done ten years ago.

Whatever explanations people put forward for the decline in self-employment income, it’s difficult to avoid the conclusion that most of it is due to increased supply and reduced demand. A few startup teething troubles and fair amount of fiddling may have added to the problem but that’s not enough to cause the collapse in self-employed earnings seen over the past few years.

The primary cause of the decline in self-employment earnings is under-employment. If employment rates hold up even as the economy contracts, there is bound to be a fall in productivity and under-employment. This has hit the self-employed particularly hard since the recession. One reason for this, identified in the resolution Foundation report, is that the self-employed are more likely to hang on in there when larger firms would lay of labour. If there is no other choice apart from the dole, simply scaling back is one way of coping. The Resolution Foundation noted a slowdown in people leaving self-employment as well as an increase in those starting it. This slowdown in exit accounts for about a quarter of the increase in self-employment. Perhaps it’s not surprising given that there is nowhere else to go.

Pensioner spending is shoring up the economy in some parts of the country, many of which are also heavily dependent on self-employment. The replacement of over 65s on company pensions by the next generation of the impoverished self-employed could knock whatever stuffing is left out of these places.

The low earnings and the associated rise in fiddling won’t do much for the tax take either. Despite economic growth, tax receipts have fallen well short of what the government expected to collect.

Whatever else might be claimed about the rise in self-employment, the economics of it look dire. Self-employment has buoyed up the employment figures throughout the recession and given politicians something to crow about but the collapse in pay has left some in severe financial difficulty. The UK economy had a massive kicking from the financial crisis. The self-employed have absorbed a lot of the blows.

3 Responses to The self-employed earnings crash