The rise in self-employment: It’s different in London

Interesting morning at the Resolution Foundation on Tuesday for the release of its report on self-employment: Just the Job or a Working Compromise? Its overall conclusion is that some of the rise in self-employment is due to the weak economy but it also reflects a trend that was underway before the recession. A bit of cyclical and a bit of structural.

The trend on Figure 15 is too weak to conclude any clear relationship between unemployment and self- employment, and the international evidence for such a relationship, discussed in the previous chapter, is mixed. However, we can certainly conclude that self-employment growth is not correlated with strengthening labour markets at the regional level, and observe that self-employment has frequently held up or grown in places where employee jobs have fallen and unemployment has risen.

In some regions, self-employment has kept the overall employment figures up and there still has not been a net increase in the number of employees since the recession.

As luck would have it, the ONS Economic Review, published last week, also has some useful data on employment and self-employment by region. It breaks the post recession period into two so we can see what happened immediately after the recession and more recently.

In the three years after the recession, it was self-employment that mitigated the fall in employment almost everywhere. 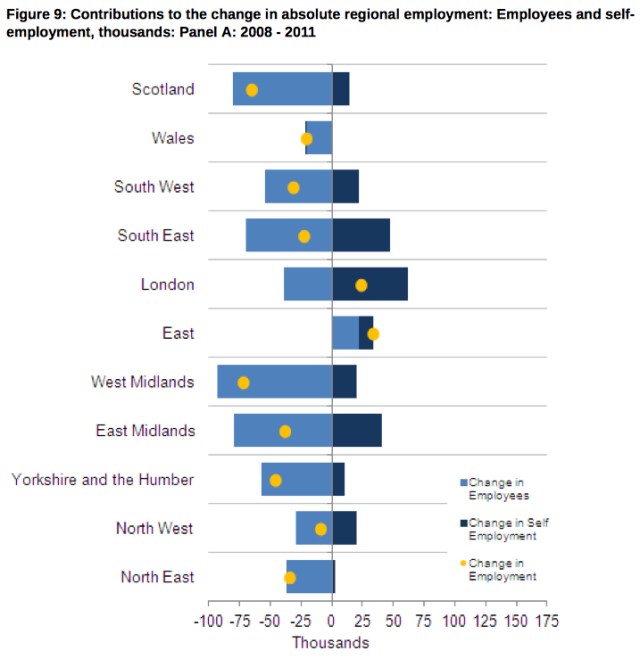 In the last two years, most of the rise in employment has been due to increases in the number of employees, apart from in the North West. At the same time, self-employment has continued to rise. In some regions, it rose by more between 2011 and 2013 than in the previous three years. 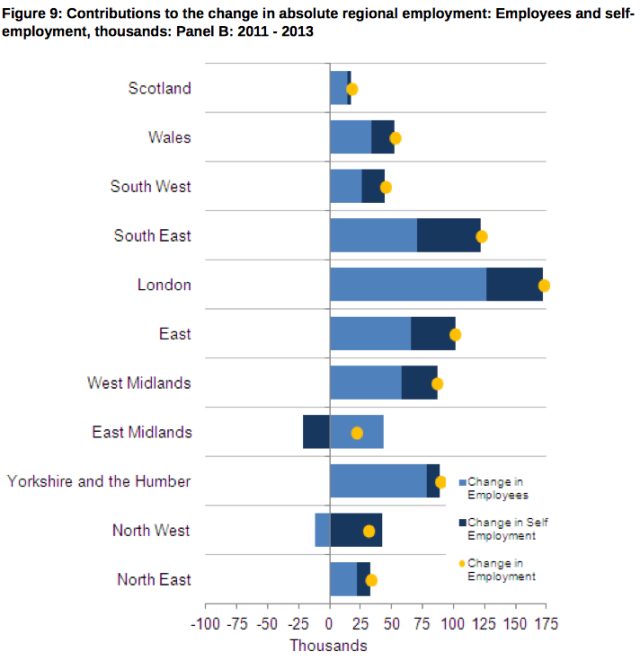 Many regions are still not back to pre-recession employment levels and, for those that are, at least half of this is due to self-employment. Only the Eastern region has seen more of an increase in the number of employees than those in self-employment.

Here is where it gets more interesting though. Workforce Jobs surveys employers and therefore holds data on where the jobs are located, rather than where people live. This chart, again from the Resolution Foundation, shows that most of the net increase in employed jobs has been in London. Much of the rise in the number employees in the East region must therefore be due to people living in that region but commuting into London. Beyond the M25, it seems, self-employment is still the main cause of the rise in employment levels.

It gets more interesting still, though. Yesterday, Michael O’Connor lobbed this chart, based on Labour Force Survey data, into the mix.

This shows rises and falls in more or less the same places as the other data but shows non-UK born taking the lion’s share of the increase in employed jobs almost everywhere. In London, they account for all the net increase in self-employment.

You might expect this in London, given that it has a high proportion of foreign-born residents anyway and it tends to be where people from overseas head when they are looking for work.

That said, the non UK-born have been a significant component of the increase in self-employment in some other regions too. Michael goes into this in more detail on his blog but, in summary, the LFS figures show non-UK born people accounting for around 40 percent of the net increase in working age self-employment across the country. 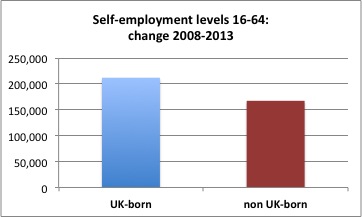 So now we have another question. Not just whether, and by how much, the rise in self-employment is cyclical or structural. It’s also why so much of it has been due to non UK-born people setting up businesses.

I must admit to being very surprised by Michael’s findings. I suspect some of the increase in the number of non UK-born self-employed  is due to the relative lack of regulation in the UK, making it that much easier to set up in business here. I discussed this in a post a couple of years ago and will do an update on it at some point.

In the meantime, though, it’s another one of those ‘damned if I know’ posts. Hypotheses, suggestions, and random thoughts in the usual place please.

4 Responses to The rise in self-employment: It’s different in London