I take a break for a week or so and lots of people publish stuff about self-employment. Even the Bank of England’s Monetary Policy Committee were discussing it earlier this month, describing it as a “striking feature” of the UK’s labour market while holding a “range of views” as to the possible reasons for it. As Ben Chu noted, this is a polite way of saying that they disagree, which is not surprising given the ambiguous and sometimes contradictory data on self-employment.

Of course, this didn’t stop the government putting its own spin on the MPC’s comments. Ian Duncan-Smith claimed that welfare reforms were reviving Britain’s entrepreneurial spirit, citing the Bank of England in support, even though there was no reference to entrepreneurialism anywhere in its report.

What the MPC did say, however, was that benefit reforms might have been one of the factors leading to higher rates of self-employment. There has been a steep increase in the number of self-employed people in recent months as these charts from the recent TUC report show. 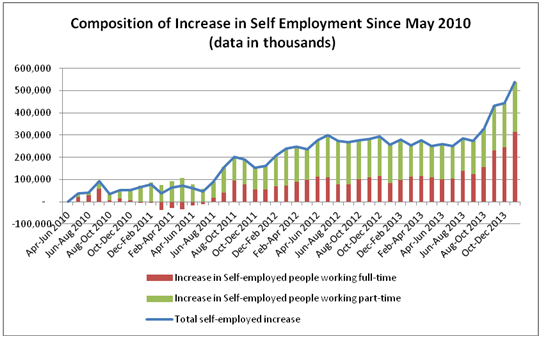 So what happened in the spring of 2013? Back on the 3rd of March, 2013, I blogged on a variety of evidence that more or less fictitious self-employment was an emerging survival plan for the unemployed and for badgered Jobcentre Plus staff alike, as well as being a way for chancers like A4e to juice their billings to the government. I called this the bogus hairdresser phenomenon for reasons set out in the post.

I also pointed to this fine post of Voidy’s on the Universal Credit regulations and their tendency to encourage the self-employed to declare more hours.

Basically, declaring self-employment permits you to stop the abuse, permits the Work Programme chancer to bill the government, permits the Jobcentre Plus caseworker to close the file and therefore happy their manager up, and lets you claim Working Tax Credit. If you have kids, you also get additional tax credits in respect of this, which means that you may actually be better off than on JSA. The regulations sort-of get this, giving the DWP the power to bother you to do more hours – therefore pushing you to declare full-time.

So when did the regulations come into force? The 29th of April, 2013. Give them a month to spread through the bureaucracy and for all parties to learn about the new setup, and I think we’ve got a suspect.

A report on the BBC last year alleged that advisers were nudging the jobless towards self-employment. For someone whose benefits are under threat, the option of becoming self-employed and claiming tax credits may look attractive. As Ben Chu puts it, benefits reforms may have “pushed more people into setting up shop on their own in order to protect their incomes”.

There is much argument about whether and by how much the surge in self-employment is a result of a weak economy and lack of job opportunities elsewhere. The data from the Labour Force Survey and the recent sharp rise after benefit changes suggest that at least some of the increase is due to the state of the labour market.

The pay data seem to point that way too. We already know that the earnings of the self-employed have crashed since the recession.

Source: ONS data via Richard Murphy who wrote on this in some detail last year. 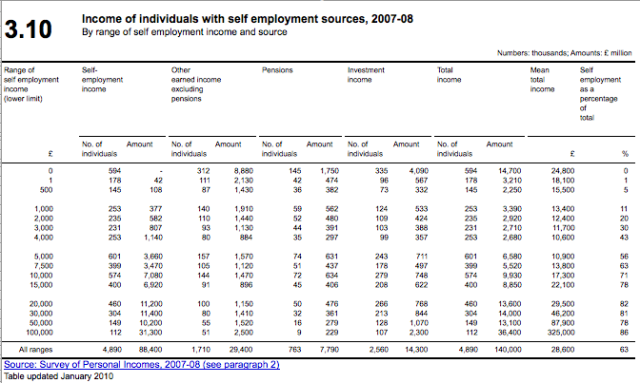 Frustratingly, the HMRC earnings figures are published almost 2 years after the relevant tax year. It will be January 2016 before we see the data on what has happened to self-employment earnings as a result of this recent upsurge. Looking at the other evidence, though, there is little to suggest there will be much of an improvement.

36 Responses to Self-employed – the nouveau pauvre