More freelancers than public employees: Is that really a Good Thing?

Ben Dellot started something when he suggested that there might be more self-employed workers than public sector employees by 2018.

Rob Grant pitched in, saying he reckons that London has already gone past the tipping point.

Some people seem to think this will be a very good thing. Luke Johnson, for example, writing in the FT:

Some commentators say the rise of flexible labour is not to be confused with a rise in entrepreneurialism. This is a counsel of perfection. Society needs the self-sufficient. An over-large welfare state breeds dependence and a deadly sense of entitlement, which only impoverishes us all. In any event such systems are unaffordable in the 21st century, as countries such as Greece, Italy and even France are discovering.

It’s interesting that he mentions Greece and Italy, both of which have among the highest levels of self-employment in the developed world.

It got me thinking, though, before we celebrate this tipping point, it might be interesting to compare the balance between public sector workers and the self-employed across the rest of the developed world.

I dug out the figures for government employment and self-employment for 2011 as that is the latest year for which I could find a full dataset. (There are one or two figures that look slightly odd here. In Germany and the Netherlands, public employment looks light because they outsource a relatively high proportion of their public service provision.)

I have also added productivity and per capita GDP figures for 2011 to the dataset for comparison.

Let’s see what that looks like on a graph. The countries with more public sector workers than self-employed are on the left.

Balance between public sector employment and self employment 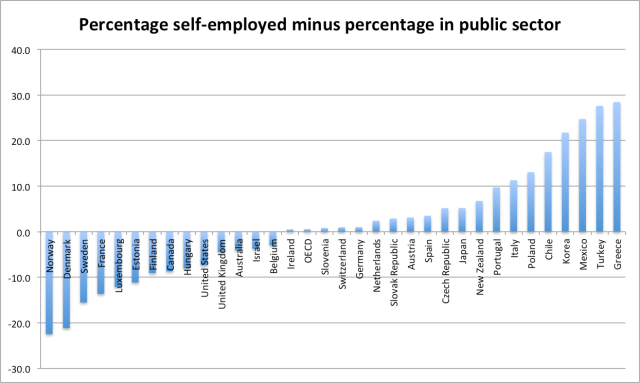 The first thing that strikes you is that the richer countries tend to be on the left and the poorer ones on the right. Even Germany and the Netherlands are further up the scale than they would be if less of their state activities were outsourced. Those economies where the labour force contains a high number of self-employed people tend to be poorer.

Let’s compare these figures with per capita GDP. 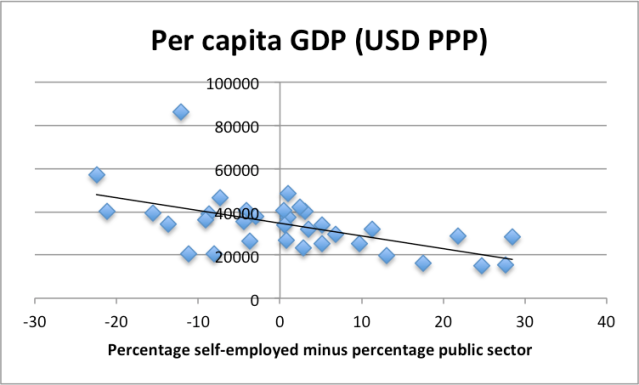 In general, then, the greater the balance tips towards self-employment and away from public sector employment, the poorer a country is likely to be.

Of course, that’s not to say that high levels of self-employment make a country poor. If anything, it’s the other way round. Countries have high levels of self-employment and because they are poor. What these figures also reflect is the size of the private corporate sectors. Take the US, for example. Although it has a relatively small public sector it is firmly on the left of the graph because it also has low self-employment. That is because much of its employment is provided by medium and large firms. It is not a small business country.

For countries on the right of the chart, like Greece and Italy, while their public employment is higher than that of the US, they also have high self-employment because their corporate sectors are weak. As the WSJ said, southern Europe’s problem is that it has too many small firms and not enough large ones. Southern Europe’s firms don’t create enough jobs so, as its public sectors retrench, self-employment takes up the slack.

A lack of large-scale employers, either in the public or corporate sectors, is reflected in productivity levels. Again, the countries on the right hand side of the graph have lower productivity levels than those on the left. Micro-businesses just don’t have the resources to invest either in technology or human capital. The consequences of having an economy dominated by the self-employed are therefore low productivity and low skills. 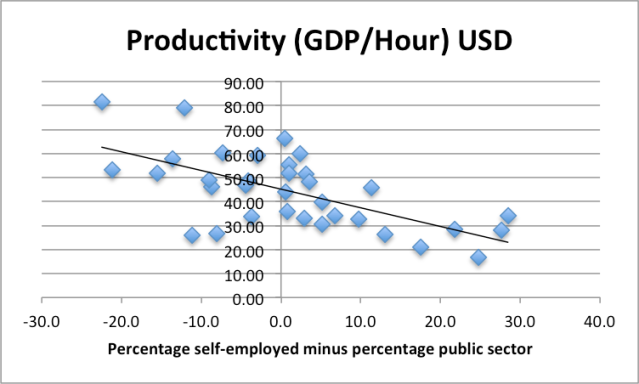 Since 2011, the UK has shifted to the right of this graph. According to research by Morgan Stanley, Britain’s increase in self-employment has been greater than that of most other OECD countries. 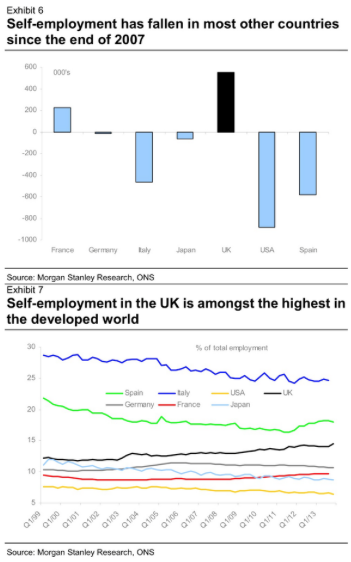 As this ONS chart shows, private and public sector jobs lost during the recession have not been replaced. The corporate sector has not created enough new jobs, so self-employment has filled the gap.

This fall in public and corporate employment and the corresponding rise in self-employment has the UK sliding down that sloping line on the scattergrams. It takes us to the right, getting further away from the rich countries and closer to the poor ones.

Every time I write something like this, some self-employed people seem to take it very personally, as though I’m criticising their decision to go self-employed. They are missing the point. It’s not my business to criticise anybody’s career choice but, more importantly, I’m not saying that any of this is the fault of self-employed people. The rise in self-employment is a symptom of a weak economy just as it is everywhere else in the world. People are starting businesses because there are so few jobs available, and who can blame them. The problem is, though, that this trend takes us very much towards what Peter Cheese called the low road, that of low per capita GDP, low productivity and low wages.

9 Responses to More freelancers than public employees: Is that really a Good Thing?