The working poor and the welfare cap

The details of the government’s planned cap on welfare budgets is published in the OBR’s Economic and fiscal outlook. It’s interesting to see what’s in and what’s out. 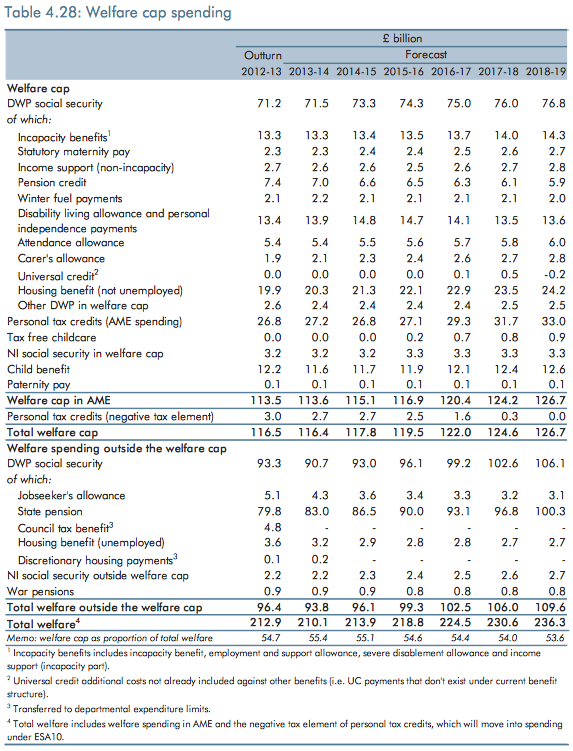 The main benefits for the unemployed and, of course, pensions, are outside the cap. The big lumps inside the cap are tax credits, housing benefit for those not unemployed and disability benefits. As I said in January, any attempt to cut the benefits bill will have to hit the working poor. Pensions are protected and, despite all the rhetoric about the work-shy, the unemployed don’t account for that much of the social security costs.

It’s all very well to say you are going to cap these benefits, though. The trouble is, the forces pushing up in-work benefits haven’t gone away. A recent paper by the Resolution Foundation forecasts that, after falling slightly, the cost of housing benefit and tax credits will rise again in real-terms towards the end of the decade.

If average pay is likely to stay low for some years yet, and it’s not just the lefties who are worried about this, then it is hardly surprising that the need for in-work benefits is likely to remain high.

As long as there are significant numbers of the hardworking poor, which it looks as though there will be for some time, pressure on the benefits bill won’t ease by much.

Gemma Tetlow of the IFS made an interesting comment on Thursday:

Which is a polite way of saying that, if the country can’t create enough well-paid jobs to get people off in-work benefits, the welfare cap might have to be quietly raised.

4 Responses to The working poor and the welfare cap