America: Not a small business country

[T]here are a small number of SMEs that are highly productive. If you want to ‘win the global race’, this is the place to look.  What is needed there is not the current policy vogue for lots of advice and state-sponsored finance, it is making sure these firms have the power to be creative free of any blocks.

One of the reasons the US is more productive than Europe is because of a dynamism which means sluggish uncreative whales are quickly replaced by hungry innovative piranhas who themselves get replaced once they run out of ideas.

In short, it is about an economy where those who exercise their creativity to the max get justly rewarded. Achieving this means stripping away the regulations, tax arrangements, public sector procurement and monetary policies which keep unproductive bigger businesses alive at the inevitable expense of new smaller players.

So one answer to our productivity problem is to encourage more new innovative firms to drive out the sluggish old ones.

Maybe so, but if America is producing hungry innovative piranhas, it isn’t producing very many.

Despite the popular myth of the American entrepreneur, America is not a small business country. As the Center for Economic and Policy Research noted in 2009:

Not much has changed since then. When compared to other advanced economies, the US doesn’t look that much more entrepreneurial than anywhere else.

America has a relatively low number of self-employed people and their numbers have fallen in recent years.

Source: OECD Factbook  and Entrepreneurship at a Glance

Compared to other developed countries, the US has relatively few people employed by small companies.

America’s business start-up rate is lower than that of many OECD countries and has also fallen in recent years.

Source for all the above charts: OECD Entrepreneurship at a Glance

Could it be that American firms are just better than those in other countries? Even though, relative to the size of the economy, there are fewer of them, are small firms in the US simply more innovative than those anywhere else?

Not according to the Global Entrepreneurship Monitor:

The percentage of American startups with innovative products is fair-to-middling.

Are US startups making products the rest of the world wants to buy? Again, not really. The internationally trading startups are more likely to come from Europe. 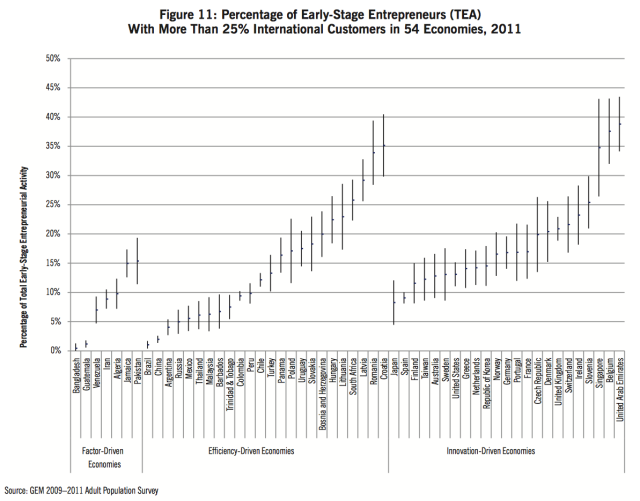 Whatever is behind the high productivity of the US economy, it doesn’t seem to be due to the quality or quantity of its small firms. There is almost no measure on which America’s small business sector stands out from those of other advanced countries.

In the end, as Jordan Weissman said in the Atlantic, it may simply be down to America’s sheer size and its funds available for investment.

Some of the most cutting-edge young companies in the world call Silicon Valley, New York, Boston, and Austin, Texas home, partly because we have the financial backers to support them. According to the OECD, the U.S. ranks second overall in venture capital invested as a percentage of GDP, which wedges us between Israel at No. 1 and Sweden at No. 3. In sheer dollars, we dwarf everyone.

Even the hungry innovative piranhas need feeding before they can get to the size where they can start eating the sluggish uncreative whales. The creative destruction in the US may simply be a function of having a huge continental single-market economy which generates a lot of investment capital. Perhaps America’s innovative piranhas grow because there are enough people around to feed them when they are too small to feed themselves.

3 Responses to America: Not a small business country