Can the NHS survive?

Hopson’s view is that, because the NHS is not changing fast enough, the health service could keel over in 2016 – the year after the general election.

His reasoning is simple and brutal: there is no money and, bar a few exceptions, not much evidence that anyone is doing anything different. The NHS, he warns, is supposed to find 4% a year in savings – a sum that is double what the UK economy has managed and something Hopson did not even witness in corporate life. In 2016, when the government takes out £3.8bn from NHS budgets for social care, the level of savings needed by the health service will rise to 7% a year. This, when demand from an ageing population, the cost of new drugs and patient expectations are rising.

NHS medical director Bruce Keogh said something similar a couple of weeks ago, although making a comparison between the NHS and PC World wasn’t the best way to get his message across:

If you go down to PC World or Dixons, each year you would expect to pay less for a PC and you would also expect the specifications to improve….I have all sorts of people [in the NHS] saying to me: ‘Give me £1,000, give me £200,000; I can improve our service’. My challenge is every other aspect of industry has to improve the quality they offer for less. So we need to change that mindset.

It’s a rotten analogy. The managers of PC World can’t take much of the credit for falling PC prices. That is down to the manufacturers. Alas, process improvement in manufacturing is a difficult model to translate to the public sector for reasons I have discussed before.

But the general point of these warnings from senior health service bosses is that the numbers don’t add up. If the NHS doesn’t reduce its running costs or receive a lot more government cash, it will fall apart.

The Office for Budget Responsibility agrees. According to its Fiscal Sustainability Report, if the health service can increase its productivity by 2.2 percent per year (the OBR’s Central projection), economic growth, and therefor tax revenues, should be able to keep pace with rising demand until the end of the next decade. On the other hand, should health productivity only rise by 1 percent per year, a deficit would start to open up sometime around 2025 which would take public debt to more than 200 percent of GDP over the next 50 years. 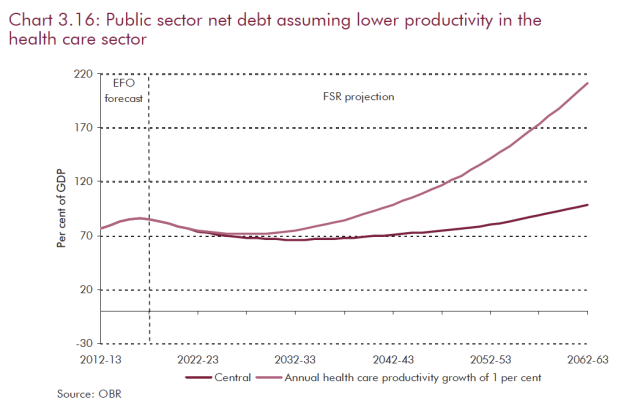 This projection is based on all other things being equal, so that if entitlement to care remains as it is now, the rising demands of an ageing population will add more each year to the cost of running the NHS. It will either need to improve its productivity or it will need equivalent annual increases in funding. If that funding is not met through taxes, the increased borrowing will push up the national debt to over 200 percent. There are a lot of ifs in there but the main point is that health costs are rising rapidly and they will continue to do so.

The OBR calculates that, without any productivity increases, health spending will increase from its current 8 percent of GDP to over 10 percent by the end of the next decade and close to a quarter of GDP by the middle of the century.

Trouble is, as the OBR goes on to say, it’s Central projection might prove to be optimistic. The NHS has rarely improved productivity at close to 2.2 percent in a year and, even when it has, it hasn’t been able to sustain it. If past behaviour is a predictor of future performance, 2.2 percent every year looks like a tall order.

The problem for the NHS is that demand for its services is likely to rise at such a rate that the productivity improvements it has been able to make in the past won’t be enough to keep pace with its rising costs. This is a problem for health services across the developed world. As this report from the Economist Intelligence Unit explains, life expectancy is rising but healthy life expectancy is not keeping pace with it, so more people will spend more years at the end of their lives needing medical care. It warns that the health systems in Europe are “facing financial ruin”.

The IMF’s Fiscal Monitor report, published in April, predicts increases in health spending relative to GDP for all the advanced economies over the next 15 years. It forecasts health spending in the UK rising by 3.3 percent of GDP between now and 2030. 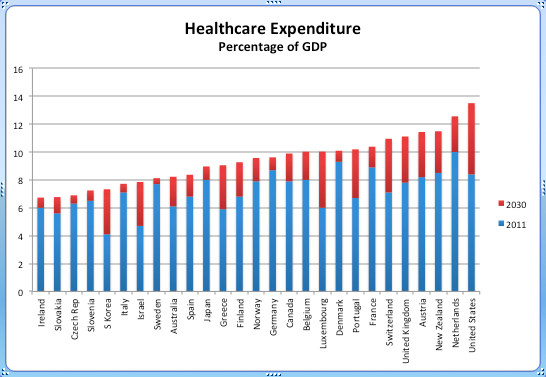 For reasons which are not clear from the report, the IMF believes health spending in the UK will rise by more than in most other advanced economies. This would take Britain from a middling 8 percent of GDP to around 11 percent, one of the highest levels of spending in the OECD. Projections for the US are even worse, rising from a level similar to ours to over 13 precent of GDP by the end of the next decade. Given that the demographic challenges in the UK are certainly no worse than those of other advanced economies, I’m not sure why the IMF should take such a pessimistic view of our health costs. I’d be interested to hear from anyone who knows.

An OECD report published in June drew similar conclusions. It predicted that healthcare spending in the UK would rise by somewhere between 2 percent and 7 percent of GDP by the middle of the century. OK, 2060 is some years away but the overall conclusion of the study was that there isn’t much the OECD countries can do to stop health costs rising. The question isn’t whether health costs will rise faster than the economy can grow, it’s how quickly and by how much. Even if we do some really clever things to improve healthcare efficiency (the OECD’s ‘Cost Containment’ scenario), the cost increases will still outstrip economic growth. 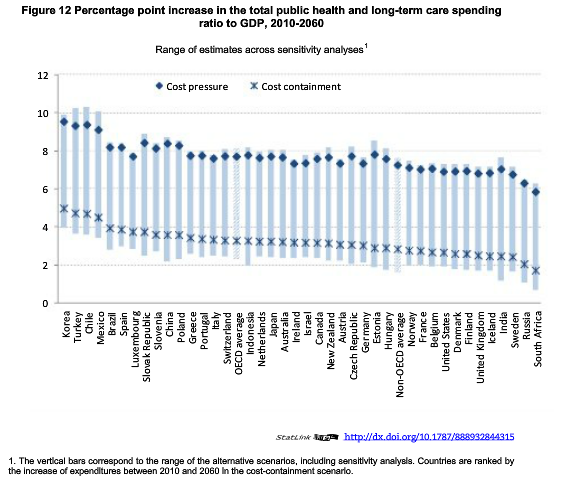 Just about every projection shows that the cost of healthcare will only move in one direction. You often hear politicians talking about the need to do ‘more with less’ in the health service but it is difficult to imagine a scenario where there will be any significant reduction in healthcare spending. ‘More with the same’ or ‘a lot more with a bit more’ is a closer representation of the challenge facing the NHS but it’s not as good a soundbite.

With demand rising and pushing costs ever higher the NHS can’t go on as it is. Health bosses agree. Using the word ‘unsustainable’ when talking about the NHS tends to provoke emotive responses but if things stay as they are, the health service is heading for collapse. It will either need to improve productivity much more quickly than it has done in the past, or it will need a lot of extra funding, or it will have to stop doing some things – or stop doing them for free.

So what’s it to be? Are you willing to pay more taxes to pay for the rising cost of healthcare? Are you happy to see the NHS stop providing some services or start charging for them? Or do you think the NHS can make healthcare in Britain so efficient that neither cuts nor extra funding are needed? Because, without at least one of these things happening, the NHS is stuffed!

Answers in the usual place please.

14 Responses to Can the NHS survive?