The self-employed will not save the economy

There are fewer people cheering on the rise in self-employment these days. Even the Daily Mail was pretty downbeat about the most recent statistics.

There’s still the odd one though. The Telegraph’s Robert Colville reckons it “might just save Britain’s economy“:

[T]he rise in self-employment isn’t a sign of economic disease, but exactly what this country needs. Amid all the doom and gloom, few people have noticed – despite much trumpeting by the Government – that new businesses are being created at the fastest rate since 1989. A recent study by Adam Lent of the Royal Society of Arts, called “Generation Enterprise”, pointed out that young people today are far more entrepreneurial than their elders, and are setting up their own businesses in ever-increasing numbers.

That’s about as close to real evidence as he gets.

Adam Lent’s paper is indeed a fascinating read. It does show that the desire to start a business has increased among young people. Then again, it has among all age groups.

Some of this is, no doubt, to do with the Zeitgeist. The celebrity status of entrepreneurs like Richard Branson and Alan Sugar, together with a steady diet of ‘business reality shows’ like Dragons’ Den and Mary Queen of Shops, has made more people think ‘hey, I could do that’. Removal of regulations has also made it easier to start up a business. Add to that the dire employment situation and it would be surprising if there hadn’t been an increase in people wanting to start their own businesses.

But there is a world of difference between wanting to do something and actually doing it. Here, as you might expect, the numbers are smaller. Lent cites an RBS survey showing some evidence of a sharp increase in entrepreneurial activity, especially among the young. 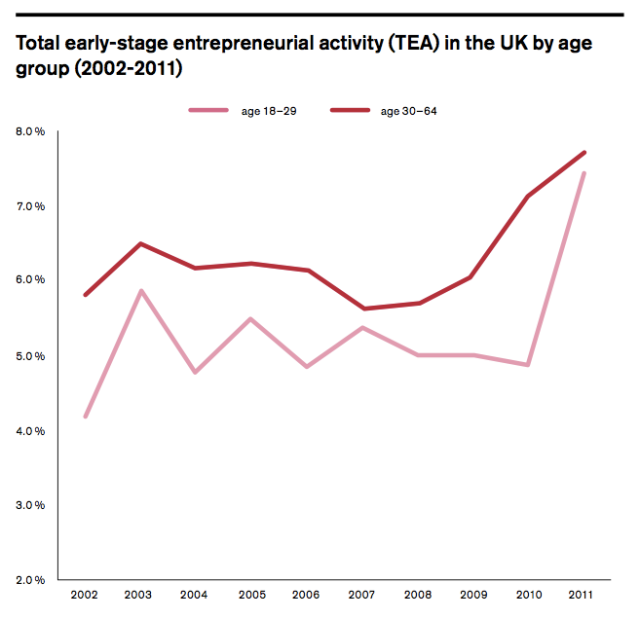 Again, though, the increase has been most marked in the last couple of years. Is this really an increase in entrepreneurship or just part of the general recession-led increase in  self-employment?

Last week, the ONS published some fascinating data on the self-employed. Here are some of its findings:

But here is the bit that kills the ‘increase in entrepreneurship’ myth stone dead:

Figures released yesterday by the ONS show a real-terms decline in earnings over the past three years or so, taking pay levels back to 2003. 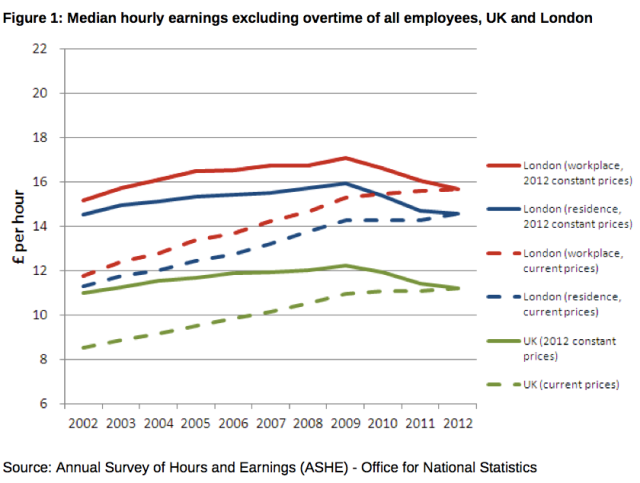 But look at what has happened to the earnings of the self-employed. 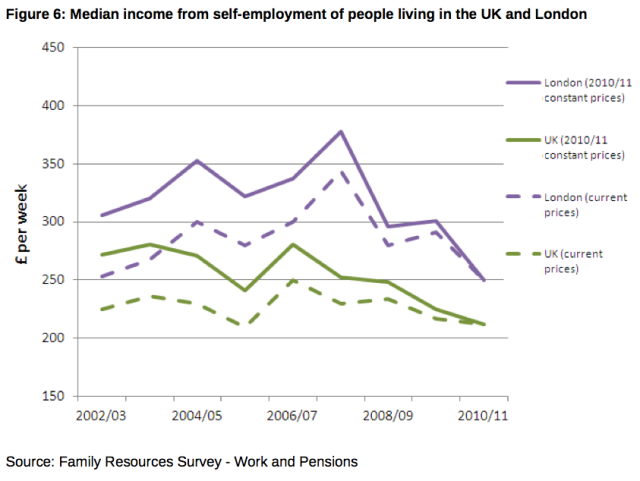 They haven’t just fallen in real terms; they are below 2003 levels in absolute terms too, having crashed in the years since the recession. The increase in self-employment has seen pay levels collapse, partly because of increased competition for work and partly because many of the newly self-employed are earning pitiful amounts and are struggling to make ends meet.

Don’t get me wrong, I’m glad people are setting up their own businesses. As Adam Lent says, somewhere among the record number of new companies there might be a new innovation that helps us make the next technological leap. Making it easier for people with ideas to develop them and take them to market has to be a good thing.

But there is nothing whatsoever to suggest that this is any more likely now than it was five or even ten years ago. The number of proper small businesses, as opposed to one-man-bands, is about the same now as it was in 2001.

The rise in self-employment is a symptom of a weak economy, not of a rise in entrepreneurialism. Working long hours for falling pay, mired in debt and dependent on in-work benefits, the new army of odd jobbers struggles to get by. Whatever this country needs, it isn’t more gardeners, taxi drivers and jobbing interim managers. The suggestion that their increasing numbers will ‘save Britain’s economy’ is pure fantasy.

Update: Something similar is happening in the US.

8 Responses to The self-employed will not save the economy