The England and Wales results from the 2011 Census were published yesterday. There was predictable alarm about the biggest population increase since records began. Immigration was a significant factor in the population increase. By adding a lot of twenty-somethings to the population it also fuelled the mini baby boom. And, of course, greater longevity added more people at the other end too.

The airwaves and the internet were alive with people complaining about the rising population. The familiar Britain-is-Full argument was rolled out. MigrationWatch insisted that the UK population should stay roughly where it is now and be prevented from rising above 70 million, although they didn’t specifically say how.  Others warned about the proportion of old people, now over 16 percent of the population, and the dependency ratio.

This interactive gizmo on the ONS website shows the UK population pyramid from 1971 with projections until 2085. In 1971, just as those big boomy postwar years were coming to an end, the population profile still resembled something like a pyramid. 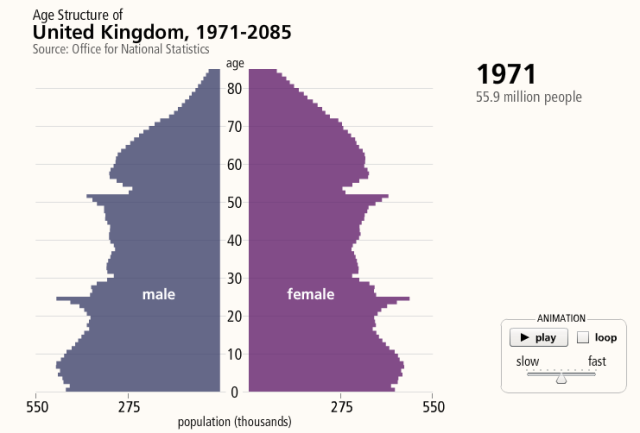 There are more people at the base than at the top and the over 65s are around 12 percent of the population. 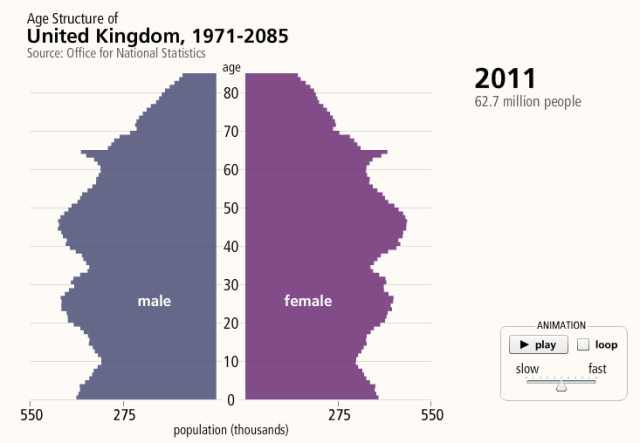 There are a lot more over 65s, now over 9 million people, some 16 percent of the population.

But here’s the rub. With this number of over-65s, if we wanted the same dependency-ratio as we had in 1971, we’d need to have a population of around 80 million by now. It’s pretty obvious when you look at the charts. If top gets bigger, the bottom of the pyramid has to get bigger too, or it won’t be a pyramid any more.

It gets even more interesting when you look at the population projections for twenty years from now. By then, there will be close to 13 million over 65s. 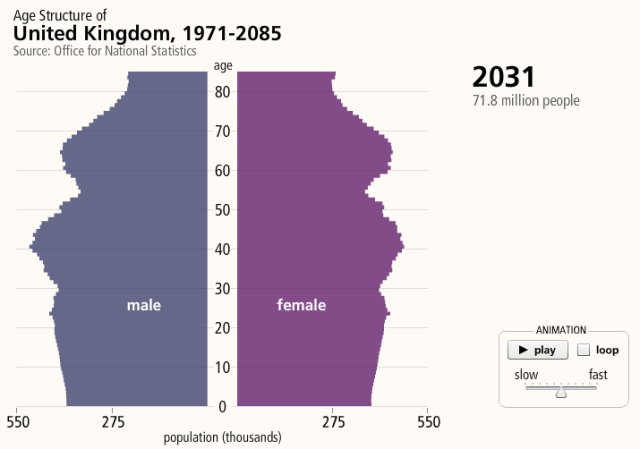 To maintain even the current ratio of over 65s to everyone else, the population would have to be around 80 million. To have a 1971-style pyramid structure would need it to be over 100 million.

OBR thoroughly irresponsible to promote high immigration to reduce public sector debt in 2060 without making clear that this would add 22 million to our population.

This is wrong on two counts. Firstly, the OBR made it quite clear that its High Migration scenario would take the population to 86m by 2060. Secondly, the OBR wasn’t trying to promote anything. That’s not their job. They were simply saying that, unless the ratio of working age to non working age people is maintained, the debt will continue to rise. Immigration is just one way of achieving that. Other ways include an increase in fertility or a re-definition of working age.

But, as these charts make clear, the problem with increasing the young population, either by having more children or importing them from elsewhere, is that they will eventually get old too and, to maintain the ratio between the generations, we would have to keep adding more young people. As increasing longevity enables more of each cohort to work their way up to the top of the pyramid, the bottom would have to keep expanding for it to maintain its shape. We would end up with a game of population poker with each generation raising the stakes for the next one.

Te recap, then, because more of us are living longer we have to find ways of avoiding an unsustainable dependency ratio. The options are:

Of these, 1 is unlikely to be enough on its own while 2 and 3 push the problem down the road for the next generation to deal with. Which makes it ever more likely that older people staying in work will become the rule rather than the exception over the next decade or so.

In all probability, we will get a mixture of solutions 1-4 and, sadly, a bit of 5 too as life-prolonging treatments become rationed due to cost.

The idea that society can maintain its current size and shape, though, is fanciful. Capping the population at 70m, as Migration Watch and others want to do, would imply a fundamental re-ordering of society with huge implications for work, welfare and social care. But opening the door and allowing lots more people in, or a ‘battle for babies’ to increase fertility, might get us out of a short-term fix but will commit us to ever-increasing populations.

Update: For a more humorous take on the consequences of an ageing society, see Mervyn Dinnen on the riot that never was.