Into the grey unknown

Our ageing population has been in the headlines again this week, as the row over care funding resurfaced. It will keep on resurfacing every so often as it starts to affect more and more people. This is why, as the Telegraph’s Daniel Knowles said, the NHS will define the next election. And probably the one after that too.

I have written about the effects of an ageing population on Britain once or twice (*ahem*) on this blog. But it is not just a British or even a European problem. If the demographers are right, the entire global population is ageing. The only difference between the advanced economies and the rest of the world is the timing.

It is true that many countries have very young populations. The high proportion of young people in Middle-Eastern counties is almost certainly one of the factors which led to the Arab Spring. These are the Arab world’s baby-boomers and 2011 was their 1968. In 2061 the Arab media, in whatever form it takes, will no doubt be full of articles with titles like ‘2011 – where did it all go wrong’. For, like our baby boomers, the Arab Springers will age.

Ageing populations are worrying governments from Malaysia to Mozambique. If you look at the UN’s population projections it’s not hard to see why.

As far as we know, for most of human history, the population pyramid has looked like the one in the top left corner. A lot of babies are born, many don’t survive and, as time goes on, famine, disease, accidents, war and over-work kill of more and more of each five year cohort. Only a tiny number of very rich or very lucky people live beyond eighty.

But, in recent decades, this shape has started to change. Technological advances mean that a lot of things that used to kill people now don’t and couples can choose to have fewer children. The result is a shift from the pyramid to the beehive shape seen on the bottom right graph, where the number of people in each generation is much more even and quite a lot of people can expect to live beyond eighty.

The graphs for Europe and Africa show the differing speeds at which this change is tacking place. It was already underway in Europe in the 1950s. By 2100, say the demographers, even the African countries, which currently have the youngest populations, will have shifted to the beehive shape. 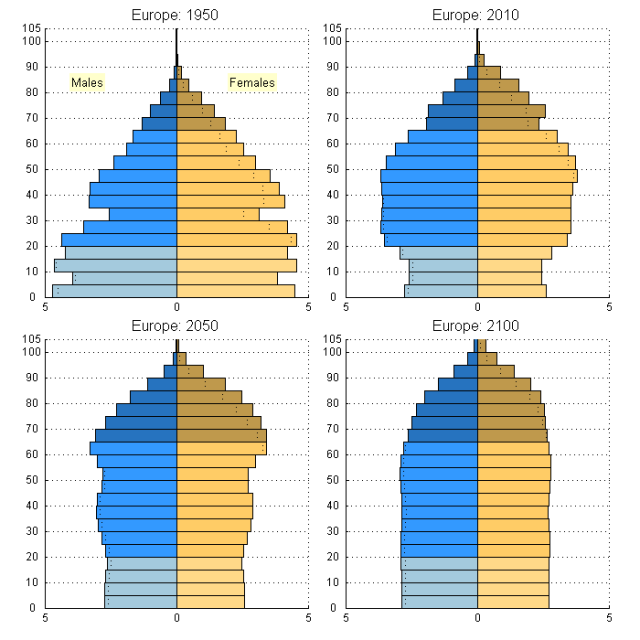 The UN predicts that world population growth will level off sometime around the middle of this century and peak at around 10 billion in 2100. By then, it says, most countries will have beehive-shaped population profiles.

In a pyramid-shaped society, retirement at 65 took only a tiny proportion of people out of the workforce. In a beehive-shaped one, it takes out a lot more. A recent McKinsey report (full of cool graphs but protected so I can’t copy any of them) warned that, over the coming decades, the ageing global population could have an impact on skill levels and, therefore, on productivity. It predicts that 38 million college-educated workers will leave the labour force over the next twenty years, taking their skills with them.

Because of their age profiles, this will hit the advanced economies first. Maintaining historical GDP growth rates with a smaller workforce would mean that northern European countries would have to increase their productivity growth rates by a third. In southern Europe the rates would need to double!

It concludes that, without either a surge in productivity or much greater employment among the over 55s, the rate of GDP growth in advanced economies will be much lower than that which we have been used to. The picture is even worse in southern Europe, where “the next generation could be poorer than their parents.” So much for early retirement helping the young!  (See previous post.)

An ageing population, then, presents a number of challenges which will catch up with most countries sooner or later. Society will be very different, in terms of its age profile, from that which has existed for most of human history. Our attitudes and assumptions about age were formed by the pyramid-shaped societies in which our ancestors lived. We have no idea what living in a beehive-shaped one will be like. We don’t know what it means in terms of care, work, retirement and the traditional relationships between the generations. As Berkeley’s Ronald Lee put it:

We don’t really know what population ageing will be like, because nobody has done it yet.

The human race is embarking on what is probably going to be its greatest experiment yet – how to manage a much greyer world.

3 Responses to Into the grey unknown