The CBI and IPPR published a report on the future of public services last week. It warned:

Britain faces a longer-term fiscal challenge. The Office for Budget Responsibility has estimated that by 2030 Britain will once again move into deficit because long-term trends look set to increase the demand on public services while restricting future tax revenues.

The paper calls on politicians to start a public debate now about the scale of this challenge and the kind of decisions it requires us to make.

Start a debate? Some people have been banging on about this for ages.

The report’s projections of age-related spending are less pessimistic than some I have covered in previous posts. It predicts a rise of around 2 percent of GDP by 2030 and 5.6 percent by 2060. However, it also points to a number of unknowns, such as economic growth (or lack of it), migration, birth rates and unexpected behaviour change which might put pressure on public spending over the next few decades.

Then there’s climate change, the other thing, beside the cost of ageing, which keeps council chiefs awake at night.

We know that the climate is getting warmer: this is a trend that politicians have so far been unable to stabilise and which could either be controllable or potentially catastrophic in its impact particularly in the developing world.

Who knows what the cost of flood defences, failed harvests and increased migration from drought or flood ravaged countries might be?

Furthermore, says the report, tax revenues will not keep pace with the increased costs.

The inevitable result is that, if we want to keep ourselves in the manner to which we have become accustomed, but we don’t increase the tax take, a deficit will open up sometime in the middle of the next decade. 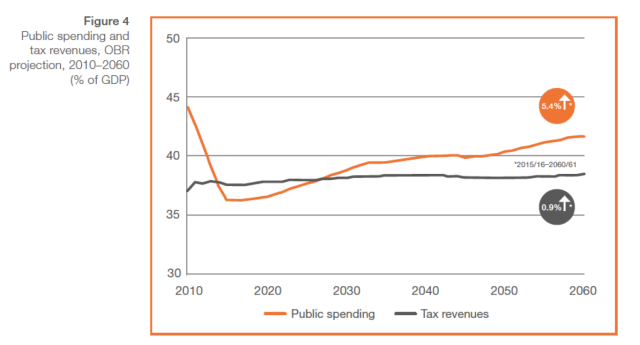 When Adil Abrar came up with the term ‘Peak State‘ I had one of those I-wish-I’d-written-that moments. Peak State neatly summed up something I’d thought for a while – that state provision had peaked and that the generous welfare and public services of the late Twentieth and early Twenty-First Centuries would be a historical blip.

Ever since the foundation of the welfare state, public spending has been, on average, around 40 percent of GDP. It goes up in recessions, for the most part because GDP goes down. In good times, it’s usually somewhere in the mid to late thirties. 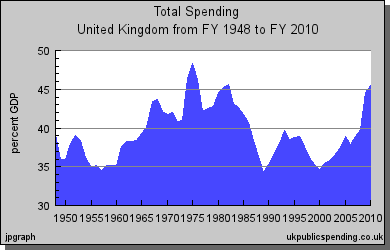 That has always been enough to cover the costs of welfare and public services. But ten years or so from now it won’t be. The increased pressure on the public purse will mean that, if spending is to be kept at 40 percent of GDP, some of the things we currently take for granted will have to go. In other words, even without trying to shrink the state, further cuts to welfare and services are inevitable.

The alternatives are considerably higher taxes, which the British have always proved reluctant to pay, or running a deficit which, given the level of state debt, would be unsustainable.

As the IPPR puts it:

Whichever party is in power over the next two decades the fiscal environment will remain tight and will impose upon our leaders the need for difficult and unpopular decisions. They would be wise to lead a public debate now on the kind of choices that will confront us. These pressures are not unmanageable, still less an excuse to retreat from providing high-quality services. Nevertheless, with more people living longer and a smaller relative number of taxpayers to fund older people’s pensions and services, something will have to give.

Rick Muir, one of the report’s authors, said in the New Statesman:

Any future government will have to make very difficult choices. The way forward is to create a broader, more sustainable tax base, take big strategic decisions about which services we as a country should prioritise and get serious about raising public sector productivity over the long term.

The report’s conclusion is stark:

This paper has set out a major challenge facing Britain and one which has yet to be the subject of serious public debate. The OBR estimates that by 2030, on current trends, Britain will sink back into deficit unless we take some action in the next 10 years to raise the growth rate, contain expenditure or increase taxes.

In times of plenty Britain did not have to address these questions, because buoyant revenues from the City and rising house prices meant that we could invest more in public services without paying much higher rates of personal tax. Those days are now over and as a country we will have to choose……What is clear is that Britain needs to start debating those big choices now so that whatever course is taken carries with it the support of the British people.

None of this is good news for ideologues of the right or left. With new demands on state spending, keeping it at around 40 percent of GDP will be hard enough. The 33 percent of GDP called for by the Taxpayers’ Alliance is probably unachievable without causing serious civil unrest.

But those on the left who hope that public services and welfare will return to pre-recession levels when a Labour government gets back into power may be disappointed too. Ed Balls was condemned as a traitor when he said that a Labour government would not be able to reverse Tory cuts. It was not a u-turn, though; more a reflection of the grim reality. A Labour government elected in 2015 would have little room to manoeuvre. It costs more to rebuild than you save by cutting. With rising pressure on public finances and high levels of debt, turning the clock back to 2007 will be impossible without big, and politically unpalatable, tax increases.

It’s not good news for the public sector unions either. The ‘no cuts’ dogma will become unsustainable. Those who set themselves against the reorganisation of public services will find their stances increasingly difficult to justify. Things are not going to get back to normal for the public sector. Permanent pressure to reduce costs is the new normal.

The task for this decade is to design a state that can handle the next one. Doing that will mean making some decisions that a lot of people won’t like. As with all difficult problems, the longer we leave it, the worse it will be.

9 Responses to Future governments face tough choices – whatever their politics