The public debt – why it’s different this time

Peter Hoskin and Éoin Clarke were knocking lumps out of each other last week about whether debt and debt repayments were worse under John Major than they are now. At least they were knocking lumps out of each other with numbers and bar charts. This exchange represents one of the more civilised discussions on the subject. On some of the political blogs the same argument has descended into vitriol and infantile name-calling of the worst kind.

Broadly, the right-wing argument goes: “The debt is all Gordon’s fault and now we are facing an unprecedented fiscal disaster.” The left’s response is: “The debt was caused by a global recession and we’ve been in worse spots before.”

Firstly, was the debt Gordon’s fault? Well even Peter Hoskin’s own chart would seem to suggest not. We’ve had high debt and high debt repayments before. 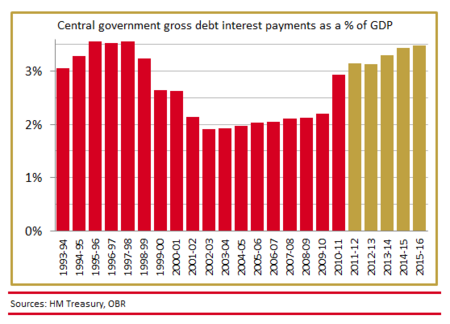 In a recession, the state gets a triple whammy. Tax receipts drop as fewer businesses and employees are paying tax. Then welfare payments go up so more has to be borrowed to make up the shortfall. Finally GDP goes down so the number you are dividing the borrowing by reduces. The effect is to make the deficit-to GDP and debt-to GDP ratios shoot up.

When the economy starts to grow again, the reverse happens. The GDP goes up, the tax receipts go up and the welfare bill goes down. The deficit reduces and, if you’re really lucky, you can start paying off some of the debt. Even if you can’t, the debt-to-GDP ratio goes down anyway just because you’re dividing it by a bigger number.

Although Gordon Brown increased public spending from the early 2000s, the impact on the public debt was fairly small. The deficit reached a peak in 2005 and was on the way down, only to shoot up again in 2008 when the recession hit – as it always does when recessions hit. OK, if Brown had not increased spending by quite so much the debt would not be quite so huge but it would still be huge. We’ve just been through the worst financial crisis since the 1930s. It would be a miracle if the debt wasn’t huge.

Furthermore, something similar happened in the other developed economies. The recession left them all with rocketing deficits. If it’s a Brown Debt, therefore, it must also be a Merkel Debt a Sarkozy Debt and a Bush Debt. 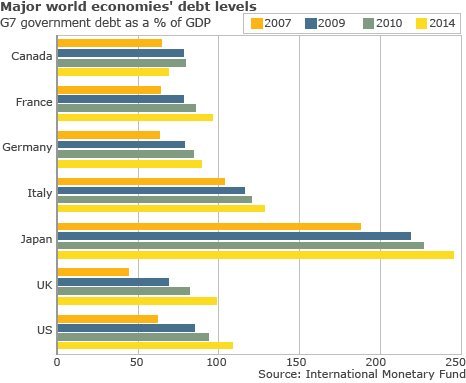 So if it’s not all Gordon’s fault, then, what about the other part of the left-wing argument  – that the debt is no worse than we’ve had in the recent past?

If you look at the figures for the last half-century, that’s true too. We are just creeping above the debt levels of the early 90s and, even with the projected rise over the next few years, it will still be lower than it was in the 1960s when we were still paying for two ruinous world wars and the Great Depression. 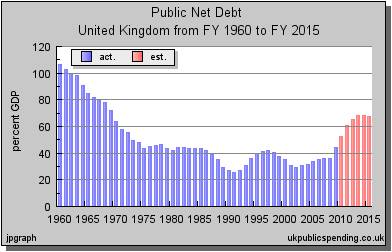 So does that mean there’s nothing to worry about and we will get out of debt again just like we did in the past?

I’m afraid not. We were able to pay down our debts during the 1960s because of high GDP growth which produced high tax revenues. It was the same in the 1980s and in the mid-to-late 1990s. Just as debt goes up rapidly in recessions, high growth brings it down again.

The trouble is, in the forseeable future, we are unlikely to see the storming levels of growth which paid off our debts so quickly in the past. The graph below is based on data from UK Public Spending and projections in the IFS Green Budget, which predicts that growth will bump along at around 2 percent for the next five years. 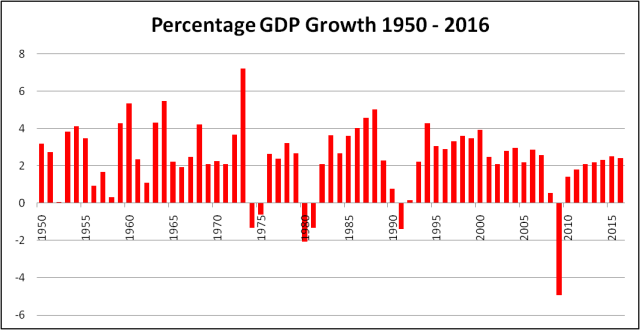 Longer term predictions are difficult but they don’t look fantastic either. For this 2020 Public Services Trust paper, Ernst and Young worked on an assumption of a 2 percent average between now and 2030. PwC quote a similar average for the period between now and 2050. (See page 20.)

One of the consequences of the great rebalancing is that much of the economic growth will take place elsewhere in the world. The G7 economies are, it seems, destined to be 2 percent growthers for some time yet.

But wait; there’s more. Just as we are struggling to pay off our debt with low levels of growth, the demands on the state are increasing rapidly due to demographics. This graph, probably the scariest of scary IFS graphs (again from the Green Budget), illustrates the problem starkly. Even without the impact of an aging population, it will be well into the 2020s before the debt reaches pre-recession levels. Add in the demographic factors and, without further spending cuts or tax increases, it never will. 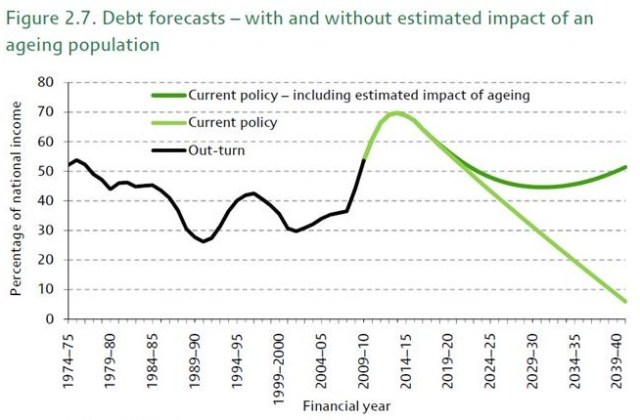 The IFS assessment is blunt:

This suggests that, without further spending cuts or tax rises over and above those already announced, the ageing population will lead to increased spending and hence borrowing and this will be sufficient to prevent public sector net debt from falling back to below pre-crisis levels. Therefore, the government will need to consider the extent to which it is prepared to tolerate a future path for debt that is above that which existed before the financial crisis, and how this compares with its willingness to announce further tax rises and spending cuts in order to limit this situation.

Which is similar to the conclusion reached by NIESR and the 2020 Trust.

So there you have it. No, the massive public debt wasn’t all Gordon’s fault, though he could have done more to ensure it wasn’t quite so big. Yes, we have had larger debts than this before but this time it’s going to take a lot longer to pay it all off. And, I’m afraid, yes we do need spending cuts and there will have to be more of them and/or significant tax rises by the early part of the next decade.

None of this is to say we need to cut quite so fast and quite so soon. At the moment, it probably makes sense to hang fire for a couple of years. But over the longer term, if public finances are to be restored, the cost of delivering public services will need to come down. That will be the challenge of the next decade.

This entry was posted in Peak State, Public Finances. Bookmark the permalink.