Last week, risk management analysts Maplecroft rated the UK and a number of other European countries as extreme fiscal risks. All but one of the countries at the top of the company’s Fiscal Risk Index are in Europe. Maplecroft reported:

Now you could be forgiven for thinking that this is a bit odd. France, Sweden, Germany, Denmark, Austria, the UK and Finland all have AAA credit ratings. Sweden, Denmark and Finland are 3rd, 4th and 5th in Euromoney’s Country Risk league. Surely that’s about as close as you can get to safe.

But Maplecroft are not talking about short-term risk. They are talking about the fiscal position of these countries over the longer term.

The ‘extreme risk’ countries are characterised by increasingly ageing populations and high public spending on social security. Maplecroft states that high life expectancy will place more pressure on public expenditure because pensions will need to be paid to more people for longer and an older populace will place larger burdens on health systems. At the same time, the working-age population in these countries is shrinking; meaning contributions to public pensions will likely decrease.

In a report from June 2009, the IMF suggested that the fiscal implications of ageing populations could dwarf the impact of the recent financial crisis in terms of national accounts. It estimates that the net present value of the financial crisis is about 11% of what ageing related spending will cost.

In other words, demographics will make the current levels of welfare provision unaffordable. If entitlements and expectations remain as they are now, the cost of pensions and healthcare will outstrip what the country can afford to pay.

Undercover economist Tim Harford agrees. He reckons that public sector occupational pensions could add £750bn to £1,000bn to the national debt. That’s in addition to the general cost of state pensions. Then there is the £130bn in PFI liabilities to be paid for over the next 25 years.

A similar conclusion was reached by the 2020 Trust and Ernst & Young last year when they calculated that maintaining current levels of welfare provision would see public spending rise to 52 percent of GDP by 2030. Using the same data, the Guardian came up with an even more pessimistic scenario. Assuming that growth only averages 1.75 percent for the next two decades, public spending would rise to 63 percent of GDP.

Would Britain be prepared to cough up the tax to pay for public spending at this level? There is no precedent for it in peacetime. It is true that public spending has rocketed since the Second World War. By the end of the 1960s we were spending as much in real terms as we were at the height of the war.

But it didn’t feel like it because we were a lot richer. The public spending which had taken up 70 percent of GDP during the war was only around 40 percent by the late 1960s.

Since the late 1940s, the level of public spending has been pretty consistent. It has hovered somewhere just below the 40 percent mark. Most of the  of the variation, including the most recent one, has been due to recessions, with the resulting dips in GDP and increases in benefit costs. It’s a simple division sum. If you make the number on the top larger and the number at the bottom smaller, even by a little bit, the percentage will jump. 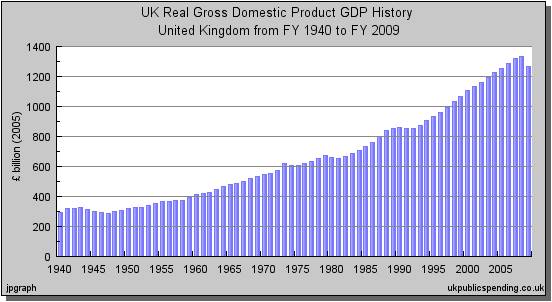 Which would be fine if everything were to carry on the way it has for the last sixty years or so. Unfortunately it won’t. We have an aging population and long-term liabilities which will place unprecedented demands on our welfare system. Add to that already high levels of public debt (projected to be close to 100 percent of GDP by 2014), with the interest payments needed to service it, and we are starting from an already precarious position. The 2020 Trust calculates that, even if our economy grew by the post-war average of around 2 percent, our public spending bill would be close to 50 percent of GDP by 2030. The demands on the public purse will mean that our traditional spending level of 40 percent will be nowhere near enough.

Britain and other western economies are experiencing a steady relative decline. The OECD estimates that its member countries’ share of the world’s wealth will go from 60 percent in 2000 to 43 percent by 2030. It is unlikely, therefore, given our demographic and fiscal outlook, that we can expect economic growth to be sufficient to pay for the sort of welfare state we have come to expect.

The welfare state, then, has peaked. It is now, like the UK’s relative economic position, in a steady long-term decline. We are unlikely to see high levels of state provision again. Historians of the future will no doubt argue about when the Peak State point was reached. What is almost certain, though, is that we are now well past it.

This entry was posted in Peak State, Uncategorized. Bookmark the permalink.